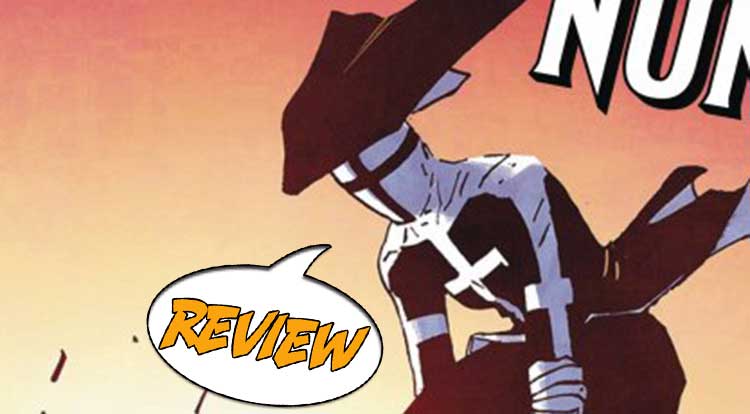 In Ninja Nuns #1, we meet the Nun Ninjas, the Catholic Church’s military wing fighting a never ending battle against sin, depravity and umm…spaghetti monsters!  Come for the four stories and stay for the divine pasta, in your next mighty Major Spoilers reviews! Previously in Ninja Nuns: The Catholic Church’s efforts to stop evil have culminated in a sassy group of nuns armed to the teeth with God’s love and a fine set of swords and an attitude to match.  No God is too small for their keen eyes, as the fight to save mankind moves from the confessional to the battle field!

Ninja Nuns #1 is an anthology of four stories introducing the reader to a trio of nun Ninja’s, the Catholic Church’s effort to stamp out heresy and demonic beings from the face of the Earth.  You might think the issue is a po-faced exercise in liturgy and Bible quotations (there is a bit of that), but actually, it’s a take that relies heavily on humor.

The four stories range from dispatching the God of Constipation, saving a statue of Mary Magdalene from being a DJ at the ultimate party, to free a literal Spaghetti Monster before a brief sojourn at a comic’s convention leads to a satisfying beat down of a pair men for whom toxic masculinity is a defining feature.

The premise isn’t enough necessarily to sustain an entire issue, so the anthology format is a winning stroke of good fortune, for the creators, and the readers.  There’s enough humor and action in each bite sized chunk of story to ensure the reader’s attention doesn’t drift.  The variety on offer, in terms of story, humor and art style, is also a selling point.

GOD LOVES YOU ALL (BUT MOSTLY YOU)

All of the four stories are amusing in their own right, though for sheer audacity, Rise of the Discomancer, with its sorcerer animating a statue of May Magdalene so she can spin some disks at a rave, really does take the cake.  There’s a fun story about a magician summoning what he thinks is the God of Tantric Sex, only to discover to his horror it is actually the God of Constipation.  The most uplifting story involves the Spaghetti Monster I mentioned earlier, who is all about good intentions and being nice, and not the usual murder and mayhem one might expect in a more serious story.  The last story certainly hits a nerve about the more boorish attitudes exhibited by men at comic conventions, but is really too slight for any deeper examination.

I’m not entirely sure if there is an intent to create a more unified story structure after Ninja Nuns #1.  It doesn’t really matter, though, as it really does seem the creators want to have fun with an outlandish concept (though, no more outlandish than a detective dressed as a bat, say) with the intent of undermining a lot of the usual tropes that one might expect.  Ninja Nuns #1 is fun frippery, and a series worthy of keeping an eye on for more fun and Nun Ninja hijinks!

Ninja Nuns #1 isn’t going to win any awards for its deep thinking, engagement with difficult material, or confronting artwork that will linger long in the mind.  It is, however, a fun concept that younger readers (assuming they know what a nun is – what fallen times we live in) will take to like the proverbial, while there are enough knowing winks that an adult will enjoy the often wry sense of humor.

Some might think the concept is basically a throw away, the humor too frivolous and lightweight, but in the right frame of mind, Ninja Nuns #1 is a diverting piece of entertainment (though at $4.99, you’re paying a premium for it). In a dour world of riots and insurrection, Ninja Nuns #1 is piece of fluff that more often than not hits the funny