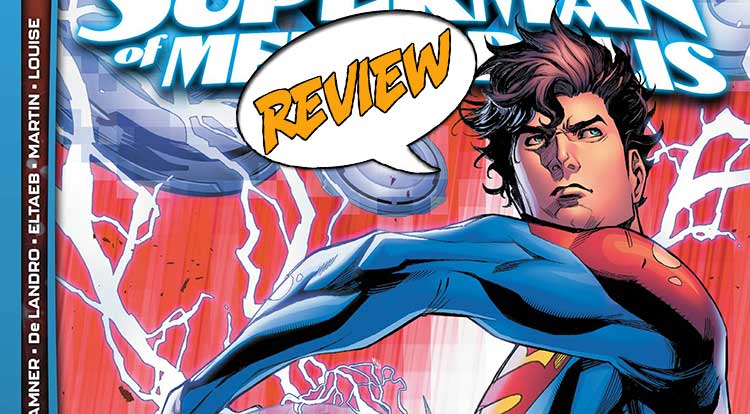 With threats coming from all sides as well as within, Superman must make a drastic decision to save his beloved city.  Your Major Spoilers review of Future State: Superman of Metropolis #1, awaits!

Previously in Future State: Superman of Metropolis: Jonathan Kent, son of Clark Kent and Lois Lane, now holds the title of Superman and he and his cousin Supergirl have been protecting Metropolis.  A company called Trojan has moved in though and has gained control of some of the population via cybernetics.

In the first of two backup stories, a new Mister Miracle is patrolling Metropolis trying to get to the bottom of a strange new barrier that has encased the city, when a group of robots attack.  He manages to fight them off for a while before his Mother Box loses power and he’s left defenseless.

In the second of the backup stories, The Guardian has been contacted by Jimmy Olson to try and be a positive image for the people of Metropolis who have been suffering for months waiting for Superman to release them. But a woman named Mary has been stoking the anger among the population.

WE NOW JOIN THE PROGRAM ALREADY IN PROGRESS

The first thing that is abundantly clear is that this is not the sort of story that is designed to give you the entire backstory or fill the reader in on a lot of information that would help this issue make a bit more sense. Now, in some ways this is an effective narrative style as it lets the setting and character actions fill in some gaps.  But, at a certain point it does feel like this is an issue from much further along in a series rather than a number 1, which made me wonder if there were some issues with important information I needed to have read.  But other than that, I thought this was a good Superman story.  Some of the best Superman stories are ones that question Superman’s role in society; is he a savior? A protector? A god?  And here we get a Superman making a unilateral determination on the lives of everyone in Metropolis and it should be exciting to see how those consequences play out.

To be clear, all the art in this issue is good.  Yet, it’s the backup stories that feature the most interesting artwork.  Valentine De Landro and Marissa Louise come together to give a Mister Miracle story a street level feel that isn’t always common in DC’s lineup.  While the duo of Cully Hamner and Michael Avon Deming come together on The Guardian’s story and give it a unique look that bounces between cartoonish, abstract, and classic in a surprisingly coherent manner.

While the main Superman story is intriguing and sets the stage for something that could be very compelling, it unfortunately feels a bit too impenetrable and missing just a little too much information to allow the reader to feel comfortable with the story.  On the other hand, the two backup stories both are clean action stories, with nice artwork, that feel accessible while showing some of the consequences of the main story events. 4 out of 5 stars.

Future State: Superman of Metropolis is a dense book with a lot going on that doesn’t hold the readers’ hands at all. At times this is nice and helps the story, at other times though it makes the reading a somewhat confusing ordeal.