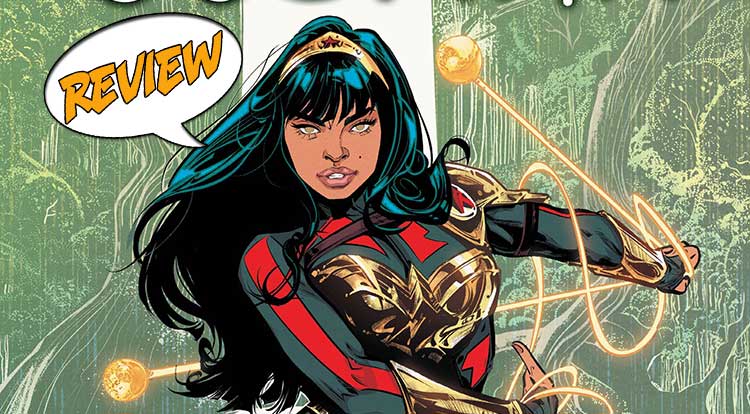 When the time is right, a hero appears. Wonder Woman Yara Flor is on a mission to rescue a sister warrior. Can she fight her way to the Underworld? Find out in Future State: Wonder Woman #1 from DC Comics! In Future State: Wonder Woman: After the events of Dark Nights: Death Metal, we got a hint of the future. In this case, the future is not only a time, but it is a space where new and different versions of great heroes, such as Wonder Woman, face their foes and fight their battles – and we are treated to a reimagining of how things could be!

Future State: Wonder Woman #1 opens deep in the Amazon rainforest where we see Yara Flor making her way through the undergrowth to fight a large creature – a creature she finds out the hard (although traditional) way is a hydra. As we see this, a narrator talks of the remote past, the age of the Gods, and their interactions with humans. There is a nice tie-in relating this age to a time when people held a closer relationship to the land, which seems especially fitting in the Amazon. And as Yara finishes up her fight, we get her connection to the story. She was the right person at the right time when the world needed someone to be there, between the Gods and humanity. We also find out she has a flying horse named Jerry who, like many horses, has a mind of his own. I appreciate the humor this brings to the story.

It’s a great start, and it looks like just another day fighting monsters until Yara spots Caipora, a small rainforest being who asks her what the heck she’s doing. As it turns out, she is trying to get into the Underworld to rescue a sister warrior from Hades. A hydra horn is her ticket in. But Caipora, who seems to be some sort of guardian nature spirit, won’t let her poach creature parts. Out comes Yara’s lasso, which is actually a bolas, and that is a perfect touch. Caipora agrees to take her to the Underworld herself, and there is a humorous conversation about a past run-in between these two.

And then it’s off to the Underworld, which is full of the traditional mythic trappings but placed in a setting that brings to mind the grand architectural design and niggling annoyances of a modern airport. You know, it’s a fair connection. Caipora digs out her membership card and has a long conversation with the gatekeeper about upgrading her status. Yara meanwhile gets bored, tries to pass through a turnstile that won’t let her through, rips it apart…and everyone breaths a sign of relief as Cerberus does not wake up.

Once they’re through the transit hub, they get to the ferry. Not only is there a long line of souls, but Yara doesn’t have any coins for the ferryman. It doesn’t take long for her to get impetuous, and to cause a bit of a disruption.

The art of Future State: Wonder Woman #1 is well worthy of the title. It is dynamic, dramatic, and drop-dead gorgeous. Yara Flor herself is striking and I love her costume. There are nods to Wonder Woman costuming we’ve seen so we can make that connection. I like the gray and red geometric pattern of her body suit, and her shiny bits of armor look terrific against it. Yara is a Wonder Woman with black hair, but unlike Diana’s curls, hers is long and straight. She is young, impatient, and full of attitude. She also flings herself fully into whatever she is doing, and this comes across so clearly.

Caipora looks as though her outfit is based at least loosely on rainforest traditions. It amused me that, while she started out as a protector of nature, she completely fits in when the journey heads to the Underworld. High ceilings and grand, bright spaces are not what we tend to think of when we think of the Underworld. Then when I saw the stanchions leading to the customer service demon with its computer, I almost burst out laughing. There are so many more little airport details thrown in that it’s fun to take time just enjoying every panel.

BOTTOM LINE: OFF TO A STRONG START

Future State: Wonder Woman #1 throws us right into the story with a deftly handled blend of narration, action, and humor. It’s clear from the get-go that this is a different Wonder Woman with her own background, but it is also clear that she, in her own way, is up to the name. This is a terrific book.

Yara Flor will go through any length to rescue a sister warrior – even to the very Underworld!