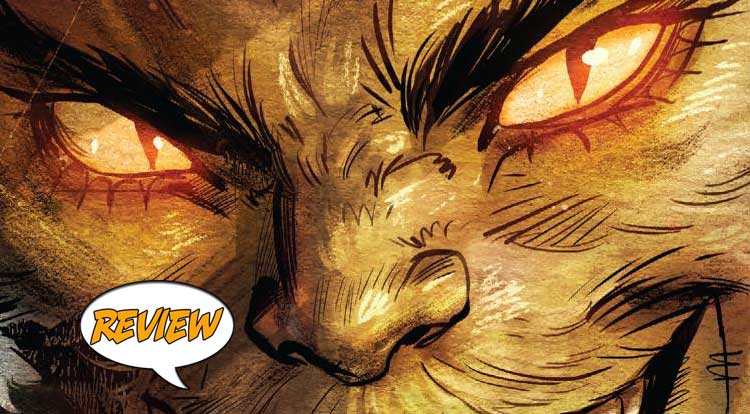 They say never make a deal with the fey for a reason…  Your Major Spoilers review of The Dreaming: Waking Hours #6 from DC Black Label awaits!

Previously in The Dreaming: Waking Hours:  As life gets back to something almost like normal for Lindy, sorceress Heather After finds herself plunged into a waking nightmare of her own!  The cruel creature known as Puck is stalking her, and no being she could possibly summon can protect her from his wrath! Unless…  no, she couldn’t possibly try to summon… really?!

MAGIC IS THE THREAD

Though this issue starts with four different vignettes (Lindy getting a full professorship, Jophiel getting a roommate, Benedict discussing his future with Father Paul) before settling in with sorceress Heather After.  She’s got plans to go to the club, insisting that her boyfriend accompany her.  it’s a beautiful party filled with beautiful people, interrupted only by the appearance of Puck himself… with a knife!  He slices her open with his vorpal blade, snicker snack, and leaves her to bleed out.  Worse, Heather didn’t bring any protective sigils or supplies with her, leaving her to find her way to the emergency room.  When she awakens from blood loss, she contacts Constantine for backup, and he suggests that she summon a protector.  She uses the most powerful spell she knows and summons…

…Matthew the Raven and Goldie the baby Gargoyle?

This comic may not have the lyricism of a Neil Gaiman script, but it’s an impressive read nonetheless, and even though I missed a couple of issues, it’s easy to get into who is who and what they’re doing.  Better still, the art is just incredible, with the several pages of rave making for a multicolored party atmosphere that even the wicked Robin Goodfellow couldn’t dispel.  The use of established Dreaming characters is also well-balanced, and I really found myself drawn into Heather’s plight, even if she’s cocksure and overconfident enough to make John Constantine question her decisions.  The art is truly wonderful throughout this issue, reminding me at times of ‘Fables’, always lush and lively.  It’s the kind of comic book that makes me miss classic Vertigo, and makes me happy that Black Label is still around to carry that banner into a new decade.

In short, The Dreaming: Waking Hours #6 is a pretty perfect comic book experience, with art and story coming together seamlessly to show us another of the secret sides of the DC Universe, with just enough ties to the existing portions of the Sandman Universe to keep established fans in while opening new vistas for Heather and her friends, earning a dead-solid 5 out of 5 stars overall.  It’s a good book and it’s highly recommended.

This issue reads smoothly, looks like a dream and is filled with great moments of magic, intrigue and horror, making for a lovely read.