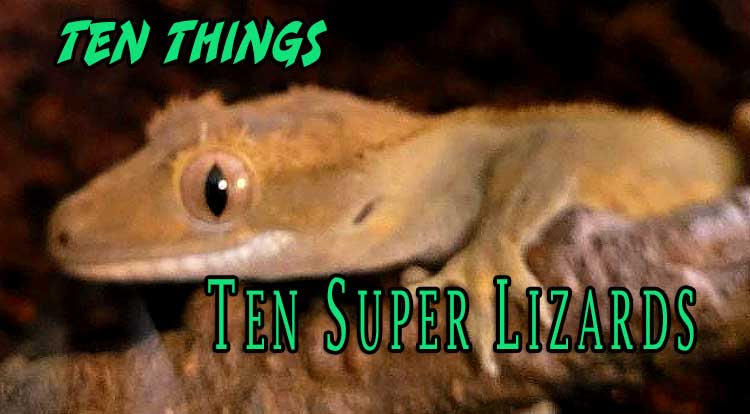 It’s not that easy bein’ green…  Fortunately, lizards come in an array of sizes and colors!  Welcome to Ten Things: Ten Super Lizards! An alien hailed from the Chameleon System, Hammie is trained in the ninja arts, befitting a chameleon.  A member of the Uchu Sentai Kyuranger team, Hammie is the first female Green Ranger to be a core Ranger, passing as a human student.  She is very blunt, occasionally to the point of rudeness, but is still a trusted member of the huge Kyuranger Super Sentai squadron.  (If you listen carefully, her transformation phrases occasionally reference the Sailor Moon franchise.) The usually useless leader of the Lizard League, little is known of his past, not even his real name.  One thing that is clear, though, is his dedication to theming, with minions including Iguana, Salamander, Komodo Dragon and others, as well as a number of reptile-themed weapons.  His most successful attempt at world domination turned part of the population, including several members of the Guardians of the Globe, into lizard/human hybrids.

He owes a debt to a certain cartoon Commander. Though Vaughn Bodē’s Strontium 90 is probably better-known, this lizard is more definitely a superhero, and is the first of what would become a veritable army of Bodē lizards.  Rocketed into space from the lost planet Salamandria, the Masked Lizard crashed on Earth, using his power of ‘Swift And Blinding Violence’ to fight evil.  Of course, he is caught and killed by his enemies at the end of his first appearance, which seems like a fitting end for the character, but only the beginning for Bodē. After the loss of her legs due to her reckless driving, Melati Kusuma applied herself to her academic life, eventually becoming an intern under Dr. Curt Connors, aka The Lizard.  Melati helped to make his signature formula safe for use without mental alterations, but took it before they could work out the whole “reptile body” problem.  Joining The Initiative, Komodo was part of the first squad of students at Camp Hammond, going through hell for a number of months before vanishing off the face of the Earth after the disbanding of the Initiative.

A fall into the sewers of New York led our man (lizard?) Mondo to a whole new life, thanks to the mutative properties of The Ooze.  Initially falling in with a bad crowd, Mondo made a life as a petty criminal before encountering the Teenage Mutant Ninja Turtles and turning away from the dark side.  A lover of skateboarding, Mondo assisted the Turtles in unraveling the schemes of Dirk Savage, who was capturing mutants for a creepy day-glo version of ‘The Most Dangerous Game.’ When Lucas Barrett temporarily gave up the mantle of the Human Lizard, college student Toni DeSanto accidentally comes into possession of his costume.  Though mostly using it’s wall-crawling abilities to entertain herself, she takes down a criminal or two as “Lizard Skater Girl” before Lucas returned for his stuff.  He did leave her a spare set of wall-crawling gloves and boots, just in case, so there’s no telling if she’ll return for more crime-punching madness down the line. Originally a member of the Alpha Squadron, Northstar’s teaching pod at the Xavier Academy, Victor Borkoswki was one of the few mutants to maintain their powers after The Scarlet Witch depowered most of the mutant population on M-Day.  it was a mixed blessing, though, as his life turned into utter chaos soon after, with crises galore and the horrifying discovery that his powers allowed him to regrow his limbs, which would be great, if it didn’t require him to lose a limb first.  With his enhanced agility, speed, reflexes and stamina, as well as a prehensile tongue and the ability to stick to walls, he’s probably the X-Man with a power set closest to that of Spider-Man. Speaking of Spider-Man, this lizard of family Agamidae, the Mwanza flat-headed rock agama, is colloquially known as the ‘Spider-Man Lizard’ due to its specific red and blue coloration.  Seen in semi-desert areas, this particular agama has become a popular pet thanks to it’s resemblance to Peter Parker’s costumed persona, and can in fact climb up walls like the hero.  Only the male agama has this red/blue coloration, though, and even that is situational, since their coloration can change if they’re angry, frightened or during the night hours. A member of the Silurian race, a humanoid lizard species that predates humanity on Earth, Vastra was awakened from cryogenic slumber in the 1880s.  Attacking workers who were trying to build the London Underground, Vastra encountered the Time Lord known as The Doctor, who convinced her to give up her attacks.  She settled into Victorian society, even saving the Queen from Zygons (depending on who’s telling the story, anyway, The Doctor claims it was him) and found love with young Jenny Flint, who eventually became her wife.  In-universe, her skills as a detective inspired Sir Arthur Conan Doyle to create Sherlock Holmes, even modeling the Holmes/Watson interactions on Vastra and Jenny, without all the kissing. During the War of the Realms, Devil Dinosaur and Moon Girl encountered Thor while fighting Frost Giants in the streets of New York City, during which she flashed back to the first time they ever met the Thunder God, and Devil Dinosaur picked up the hammer during their interaction.  I mean, the enchantment says “if he be worthy”, not “if he be a human and worthy.”

You tell me that crime wouldn’t go down in New York if people saw a T. Rex wielding a lightning-hammer.

Thanks to Faithful Spoilerite Jarmo Seppänen (@Malone_Hasco) for this week’s topic, Ten Super Lizards. Feel free to follow along @MightyKingCobra to suggest your own more Ten Things madness on Twitter or check out the full Twitter archive here!  As with any set of like items, these aren’t meant to be hard and fast or absolutely complete, if only because animal themes account for something like 45% of all super-aliases.  Either way, the comments section is below for just such an emergency, but, as always: Please, no wagering!