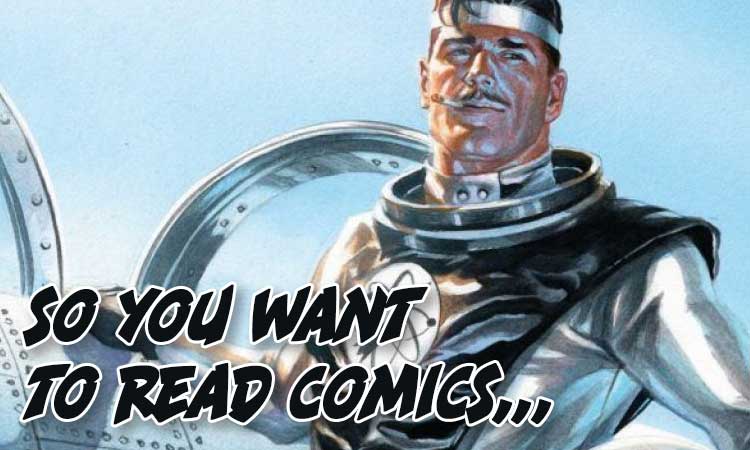 It’s a brand new year, but it’s still time for “So You Want To Read Comics”, our weekly feature where we take a look at a single topic and then offer comic recommendations for new readers, based on that topic.  This week it’s a little different.  Taking inspiration for the new year we’re looking at comics that are great for starting early in the year.

Comic books, graphic novels, trade paperbacks, however you want to phrase it, are a strange medium sometimes.  Sometimes you get a single issue or volume and that’s it, kind of like a movie.  Other times you get a larger set of volumes or chapters kind of like a standard primetime TV show.  Other times they just go on and on and on and on, like a soap opera. This means that depending on the title, you’ll have to invest a different amount of time to read.  As well as a hefty amount of money as well and to be completely honest some of those series just aren’t worth it.

So here are a couple of comic book series that are great to get into that are long, but not too long,  basically series that you can finish in a year’s time and they are certainly worth your time and money.

Astro City is one of the most awarded comic book series of all time, with both Eisner and Harvey wins as well as countless awards from various outlets and publications. Astro City is an anthology style series set in its own universe and continuity, where each story features a new story that slowly creates a latticework of characters and events that you get to watch spread out with each volume you read.  What’s especially enjoyable is the large number of perspectives that these stories come from.  You have hero and villain stories from every stage of their careers, tales from everyday citizens, and sagas spanning decades being told in the background for eagle-eyed readers.  Created by Kurt Busiek, Astro City has been running since 1996, but due to the unusual release schedule (unfortunately due to personal issues from the creators at times) there are only 17 volumes.  This means there’s plenty of time to not only read each volume of this celebrated comic book series, but also enough time to really soak them up.  The only downside is that these aren’t the most convenient books to buy, but they’re worth the effort.

You can purchase this volume via our comiXology affiliate link.

Y: The Last Man tells the story of Yorick Brown and his pet monkey who have found themselves the last two males of any species on the planet due to some mysterious event.  What follows is a long tale of how humanity copes with this sudden change, how does humanity move forward, what really happened to the males, what does legacy really mean, and how one person handles suddenly being one of the most important people in human history. Written by Brian K. Vaughan, this series features his knack for long, entwined, personal sagas with plenty of action to boot.  Y: The Last Man ran from 2002 to 2008.  Along the way it racked up an impressive 10 separate volumes or 60 individual issues, more than enough to occupy a good chunk of a year.   It should be noted that Y: The Last Man has garnered plenty of attention from outside the comic book world.  Currently, it’s been optioned for a television series and is in pre-production, so now’s the time to get on board.

So here’s hoping that your coming year is full of comics, good times, and prosperity.  What did you think of these recommendations? Do you have some suggestions of your own? Let us know in the comment section below.