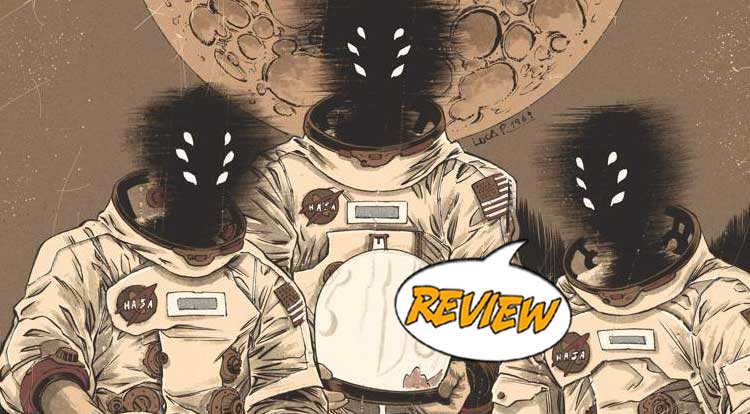 In space, no one can hear you get eaten by a shapeshifting alien monster…  Your Major Spoilers review of ROM: Dire Wraiths #3 from IDW Publishing awaits!

Previously in ROM: Dire Wraiths:  1969: The secret Earth satellite safeguarding The Moon landing is infested by Dire Wraiths!  Worse, the Wraiths now have transport to Earth.  And the crew of the first Moon landing can only stop them by making the ultimate sacrifice…

MEANWHILE, ON THE MOON

After engaging the Non-Lethal Entities (NLEs) on The Moon, the astronauts have discovered one of those letters to be untrue.  Having taken down one of the Dire Wraiths, they are barely able to escape a second, while the Wraith leader attacks their ship and their commander.  Commander Shen makes a good show of herself, blasting the creature and stealing some of its DNA for science, stabbing it through the heart.  The Wraith outside manages to maneuver one of the astronauts into his path, using the man’s life-energy to power their gateway to Earth and dooming humanity forever, until a message arrives from… somewhere?  ROM’s neutralizer quickly annihilates the creature, and the last of the Solstar Knights salutes the brave humans for their courage in facing the much more powerful Wraiths.  They head back to Earth, safe and sound… except for the glowing green eyes of one of their own.  In the second story, we see the other side of the coin, as ROM has to face a Wraith who has stolen the armor of one of his fellow Knights.  He defeats the creature, tracing its path to The Moon, where his story intertwines with the lead feature.

AND OUR STORIES FOLD TOGETHER

First and foremost, the art in this issue’s lead feature is really good, and the big full-page splash of ROM arriving from the beyond is just flat-out gorgeous, and uses the classic design of his armor, which makes an old nerd like me happy.  The backup is slight less successful, but also ends with a great full-page splash of the hero in action, which makes for a memorable sendoff, assuming this is a sendoff.  The story feels like the end, and the dedications at the beginning and end imply that we’ve seen the last of ROM, at least for a while.  This issue’s story is relatively simple, but provides some good character moments, especially for Commander Chen, and some nice moments of Dire Wraith carnage, but I’m torn on the whole astronaut-who’s-probably-a-Wraith fillip at the end.  On the one hand, it holds the promise of untold tales, but on the other it’s a hackneyed “The End… OR IS IT???” moment, and only the Flash Gordon movie can get away with that sort of nonsense.

BOTTOM LINE: IS THIS THE END OF ROM?

In the final analysis, though, ROM: Dire Wraiths #3 is a pretty solid issue of comics, providing art that ranges from pretty good to absolutely excellent, a story that provides a couple of thrills, a couple of surprises and a weird ending moment, and a climax fitting for the hero, earning 3.5 out of 5 stars overall.  If this is the last of ROM, this issue wraps it up skillfully and beautifully, and sometimes that has to be enough.

This issue looks really good, but feels like a big goodbye, which makes me wonder about the future of ROM at IDW Publishing. Still, if you have to go out, there's worse endings to do it on.