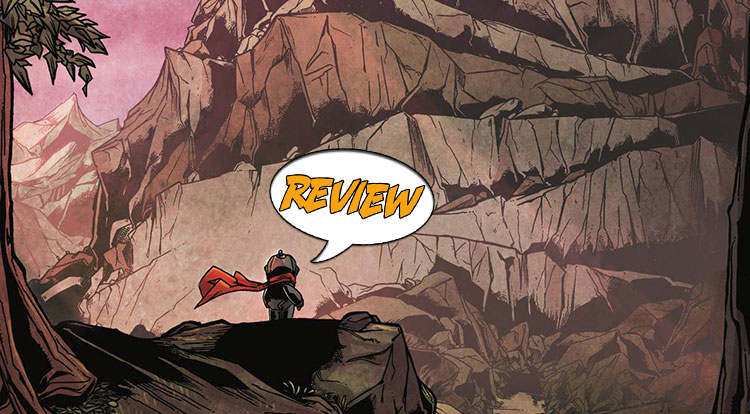 Canto’s quest is a race against time! What awaits in the Valley of the Lionhearted, beyond the Yellow Mountain? Find out in Canto II: The Hollow Men #4 from IDW Publishing!

Previously in Canto II: The Hollow Men: Canto and his friends are on a quest to save their people – their clocks are all in danger of running low. To escape the Fury, they take to the river and over a waterfall. Canto has a map he received from Aulaura’s dragon, Zixia. She was headed for the Yellow Mountain and the Valley of the Lionhearted, so that is where Canto decides to go. In Canto’s dreams, the Shrouded Man talks to him, trying to convince him that’s his efforts are futile. Veratta dies, and Canto urges Falco to take the others back to New Arcadia, while he heads onward.

Canto II: The Hollow Men #4 opens with Canto again on his own. As he studies the map, he hears a couple loud, familiar voices arguing. It is two giants, the Guardians of Dis whom Canto tricked previously! He hides, and they move on past him not walking, but both riding in a cart that they push along with their clubs.

Canto breathes a sigh of relief and continues toward the Yellow Mountain. The last Fury comes upon him and taunts him for his failures and, anticipating his quest, tells him there is no magic left in the Valley of the Lionhearted. Canto accuses her of spreading lies, but the Furies cannot lie. Then Canto tells us something surprising. He can feel the Shrouded Man’s memories, and he knows that the Furies were once three kind and caring sisters who became corrupted by the Shrouded Man, and he challenges her to find her freedom from him. In anger, she attacks, but is snatched out of the sky by one of the Giants who flings her away.

Now Canto has a bigger problem (literally!) as the two Giants recognize him. They tell him that the Great Guardians of Dis cannot let him pass – but fortunately for him, they are no longer the Great Guardians of Dis. In the tradition of Giants from folklore, they tell their tale with interruptions and self-commentary, but it comes down to the fact that because they let Canto into the city, they were dismissed and punished. Their legs have been left behind at the gate, which is why they’re now getting around in the cart.

The tale took long enough that the Fury returns. The Giants, with Canto holding on for dear life, speed off toward the mountain where they take a stand and Canto starts the climb. This is again very folkloric. The Shrouded Man built the Mountain in terraces representing kingdoms he conquered. Each terrace has a guardian that looks like a giant statue, but Canto must not look back at them after he passes. As he reaches the top, the Fury arrives and he sees an apparition of the Shrouded Man. He recognizes it as an apparition and walks through it. As he does, the Shrouded Man orders the Fury to return to him.

Canto has reached the Valley of the Lionhearted, and a voice greets him. He sees his love, telling him he has found his Princess. But then she fades and reforms as a human, and he recognizes her as the Princess from the Knight’s story. He asks her for the magic to save his people, but she cannot give it to him. He must take it, and he must leave his own heart here, taking the Shrouded Man’s heart instead. This will give him the magic he needs for his quest – but at a price.

The art of Canto II: The Hollow Men #4 is terrific throughout. I really like how the Giants are drawn. Not only are they enormous and tall, but they look weighty. They have thick muscles and heavy stomachs. Gravity affects them, which is something we rarely see, and there is a lot of them to affect. The cart they share is likewise ponderous. The wheels dig into the ground. The Giants’ muscles strain as they push it along. And they’re wearing an odd mix of stuff. These guys are just wonderful.

Canto does not run into problems with the guardians at the Yellow Mountain, but the pages and panels that compress his journey are also a treat to look at. They’re rather like the Weeping Angels from Doctor Who, but in reverse. As Canto passes each one in turn, we see them as enormous stone-like forms, watchful and even threatening as they loom over the tiny adventurer. And then there’s a closing panel showing all of them together in a different arrangement. The epic flavor is further amplified by the lettering, which here looks like the text from an old book, a contrast from the various styles used to depict characters.

BOTTOM LINE: A TRIBUTE TO PERSISTENCE

Canto II: The Hollow Men #4 balances drama, humor, and adventure. The setting continues to grow as the story moves through it, and the Shrouded Man’s story is exposed as Canto persists in trying to overcome him.