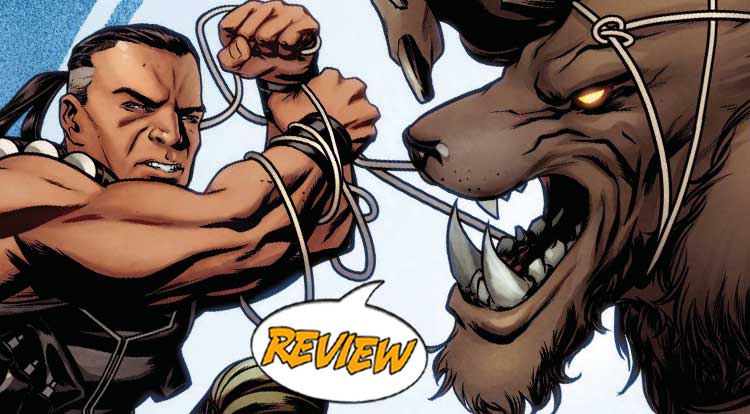 It’s Werewolf versus Red Wolf, and to the winner go the spoils!  Your Major Spoilers review of Werewolf By Night #3 from Marvel Comics awaits!

Previously in Werewolf By Night:  Red Wolf and Werewolf by Night battle it out under an Arizona moon!  What is the true history of this werewolf curse?  Who really runs Life Pharmaceuticals, and what plans do they have for our heroes in that big glass tower?

THE SONG OF BODY AND SOUL

After discovering his lycanthropic heritage, Jake Gomez hid in a cave to recover from fighting other monster-people, only to find Red Wolf waiting for him when he came out.  Rather than attack, though, Red Wolf seems focused on protecting and calming his beast-form.  It’s actually a really nice study on Red Wolf, which… feels a bit odd in Jake’s book, but whichever.  The time-lost hero calms Jake down, takes him safely home and explains a little bit about what is happening.  Apparently, the tale of the Farmer’s Boy who fell in love with the Chieftain’s daughter has been told by their people for years, but now they realize it’s all true.  Red Wolf is called into action, battling the same cyborg beast-men from last issue. They get away clean, but Jake realizes that they’ve targeted him specifically, which means that the know where he lives…  and they have his grandmother!

A LOT OF FOCUS ON RED WOLF

Surprisingly, this issue feels like a LOT, even though it’s not any longer than an average Marvel book.  We also get a lot of focus on would-be teacher Red Wolf and not so much on the new Werewolf by Night.  The issue has a strange moment about halfway through, when Jake rides off on a borrowed motorcycle and Red Wolf…  doesn’t do anything about it?  The cut to Jake abducted by villainous pharmaceutical company doesn’t seem to make sense in the amount of time it seems to take, which undermines the big climax a bit.  I enjoy the art of Eaton and Hanna, especially a moment of action wherein Red Wolf has illustrated his placemat with the tale of the Farmer’s Boy, making for a full-page splash of some truly lovely art-within-the-art.  The page discussing the history and heritage of Red Wolf is also lovely, and the amount of detail in the art is part of why this issue feels fuller than your average comic book.

In the final analysis, Werewolf By Night #3 feels overstuffed and imbalanced, but has a lot of interesting ideas packed in and some impressive art, even with a heavy focus on the guest star/mentor, earning 2.5 out of 5 stars overall.  It’s a strong enough issue to make me want to come back to see how it all wraps up, and I’d be interested in reading more from these creators, even if this issue is pretty uneven.

This feels like several different comics all shuffled in together, but none of them are entirely unpleasant...