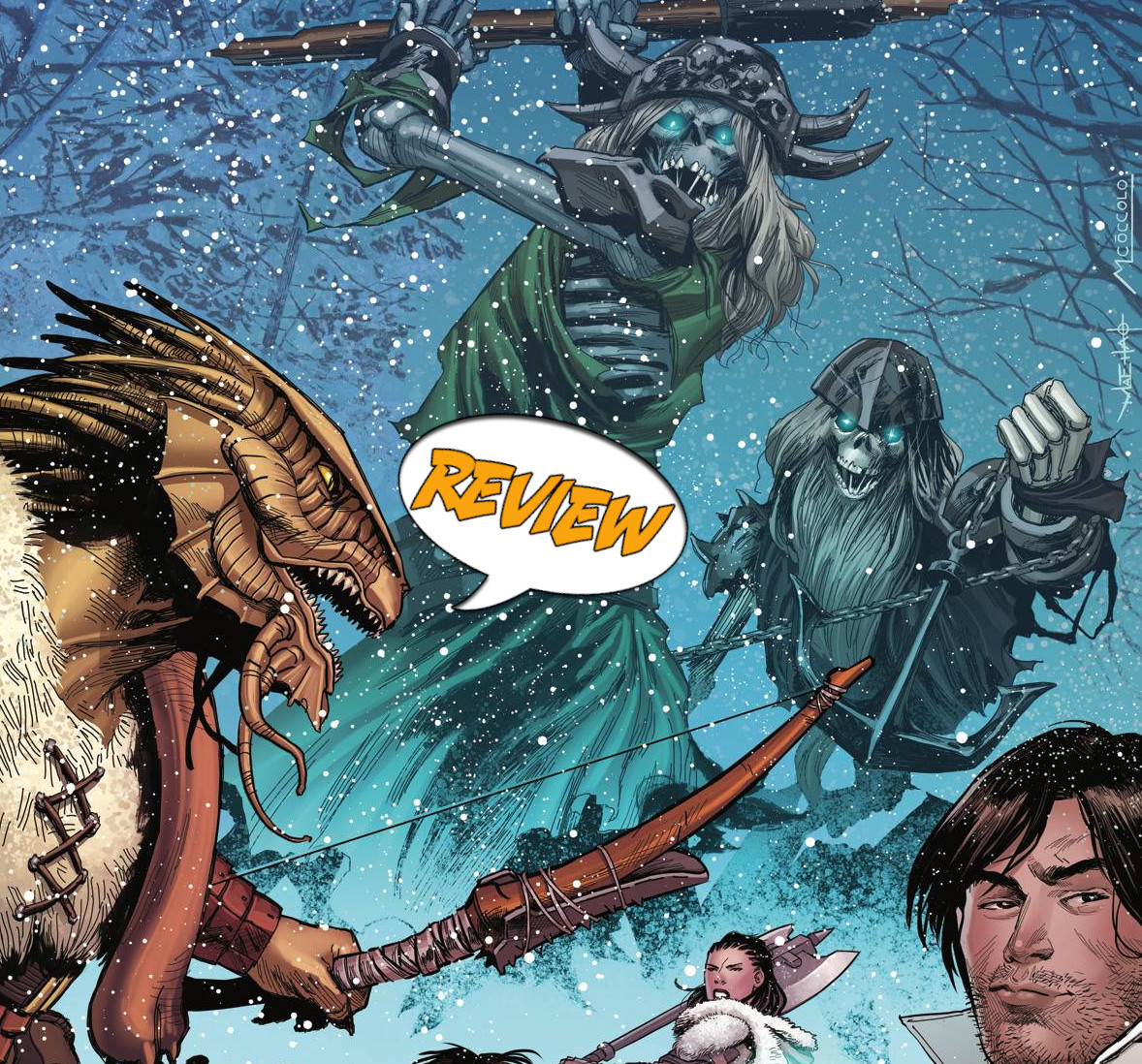 In the frigid cold of Icewind Dale, there is a group of adventurers trying to stop the endless winter. Check out that latest D&D adventure in Dungeons & Dragons: At the Spine of the World #2 by IDW Publishing!

DUNGEONS & DRAGONS: AT THE SPINE OF THE WORLD #2

Previously in At the Spine of the World: Runa, Saavrin, Patience, Amos, and Belvyre are looking for a hidden city whose magic could save Icewind Dale. However, there are issues with a new rock called Cardayln that seems to bring out terrible paranoia. Our heroes must trek across an unforgiving landscape and unexplored evils in a last ditch attempt to save Ten Towns.

Runa leads the party through the wasteland to repay her blood debt to Saavrin. For now though, she leads them to a shelter and claims she is going to stand watch without a rest. Despite this prideful boast, the party is attacked by several giant skeletons. Runa and Saavrin immediately prepare for battle and Patience is not far behind. Amos is left to protect Belvyre who doesn’t specialize in offensive magic. Amos has other plans. He knocks out Belvyre and takes his Frostbrand weapon. After his party is able to destroy the giants by pushing them off the cliff, he uses magic to attempt to kill his party. A few hours later, Runa wakes up under the effect of the Cardayln rock and raises her axe to swing at Saavrin.

TO KILL OR NOT TO KILL

So there’s this quite interesting parallel here. Runa is clearly under mind control and is about to swing her axe down on the person she has a blood debt to. Amos is willing to kill without the effect of the rock. We see this lawful creature forced to do an action she doesn’t want to do and then this chaotic person killing for self gain. It is an interesting relationship that we get to see grow over the next two issues.

The pacing feels a little odd knowing that this is only a four issue miniseries. If finding this hidden city was so critical, I would imagine that they would have discovered the location by now. It makes me assume that the hidden city is a red herring and the main plotline involves the party coming together. Perhaps everything will be resolved by the end of the story and I am just a man of little faith.

This fits all the genre tropes of fantasy D&D well. It has interparty conflict and tropes of random encounters. With solid artwork and a decent plotline, this is a story to pick up if you are interested in the fantasy genre. 4 out of 5 for me. Solid book and I plan to finish the miniseries. I really hope that Amos somehow rejoins the party and he isn’t just a villain. However after this issue, I have no idea how the party can forgive him.

A solid D&D adventure set in the frigid north. Filled with action, comradery, and betrayal, this series is certain to be exciting