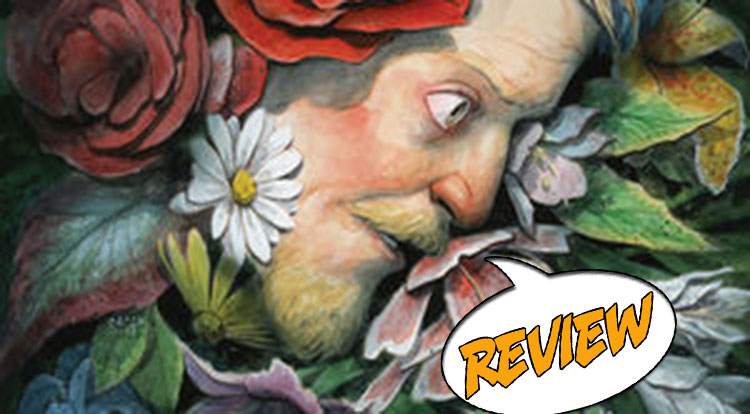 It’s down the rabbit hole once more as Randall Weird looks for what he has forgotten. As he goes deeper, are there answers, or only more questions? Find out in Colonel Weird: Cosmagog #3 from Dark Horse!

Previously in Colonel Weird: Cosmagog: We drift through time with Randall Weird. As a child, he was bullied. He doesn’t understand quite why, but even then, he realizes there is something different about him. As a young man, he is a space hero married to the woman he loves, Eve. In his explorations he finds a map. Is this key to his story, and to the fact that he has become stuck in a timeloop trying to find something forgotten? And then he finds himself with Black Hammer in the battle that is the prelude to the arrival of the Anti-God.

THE WISTFUL PAST BEFORE THE FINAL BATTLE

Colonel Weird: Cosmagog #3 does not just repeat the pattern that Randall Weird keeps repeating, or rather, as the pattern repeats, we see different chunks of it. It feels like we’re seeing more details, but can we tell what memories, what events are crucial? As the book opens, Colonel Weird talks about how he used to see the great pattern which was made of everything, but after his friends went away, he lost it. He thinks of this as he is with Black Hammer in his final fight.

Or he is until he is the young space explorer again. He has followed the star chart Eve made from a cave drawing and has found a planet exuding para-energy. As he takes a closer look, he loses audio communications with Eve, and the story deftly transitions to an old Colonel Weird seeing Eve in person. She recognizes him and tells him that the year is 1964 and he has been gone for nine years. He looks much older, though. He wants to tell her more.

But he slips back to a much younger self. It is 1976. He has discovered the pattern. He no longer needs to eat. Even then he realizes that he knows everything that has happened or will happen. Even then he realizes he has forgotten something important. We learn this as he talks with a hungry panhandler. He knows he has locked his friends in a pocket dimension, so now has no friends. The man invites him back to where he lives with his friends. He slips back to the battle where now he talks with Abraham, instructing him to gather everyone together and keep Black Hammer from fighting Anti-God alone. And then he drifts away.

And we see him, probably in the seventies, as the charismatic leader of a small cult. It’s doubtful they can come close to seeing the pattern that Randall does, but that pattern is an important part of their belief system. He tells them someone is coming who wants to take him away. Someone does come. It is Abraham. Colonel Weird has been missing in action for twenty years. And then we learn a real bombshell – Eve has disappeared at some point.

There is a kind of melancholy to this story. It continues to be a fascinating read. The world of Black Hammer really has a way of digging through a story to the heart of it, and sometimes it isn’t the heart you were expecting.

THE ANXIETY OF MEMORIES FORGOTTEN

Colonel Weird: Cosmagog #3 continues its winding, dreamlike narrative and the art delivers on this 100%. As the story shifts through time, we get transitions in the art where scenes link to one another in the way some small thing can awaken a memory. There may be no regular timeline, but these links are so strong, we feel the connections in the story. They’re both visceral and ephemeral.

Randall has several important ages, and each one is distinct. There is something about the eyes in closeup; we can always recognize him by his eyes. We know the face is the same although his age varies quite considerably. What is perhaps most striking is the underlying look of anxiety that he has, possibly ever since he came to know the pattern, or possibly a relic of when he realized he has forgotten some part of it.

If you like Black Hammer, Colonel Weird: Cosmagog #3 not only shows us a lot more about the title character, but we get a little more information about what happened before the heroes were dropped into their pocket dimension. It is a rich story full of mystery.