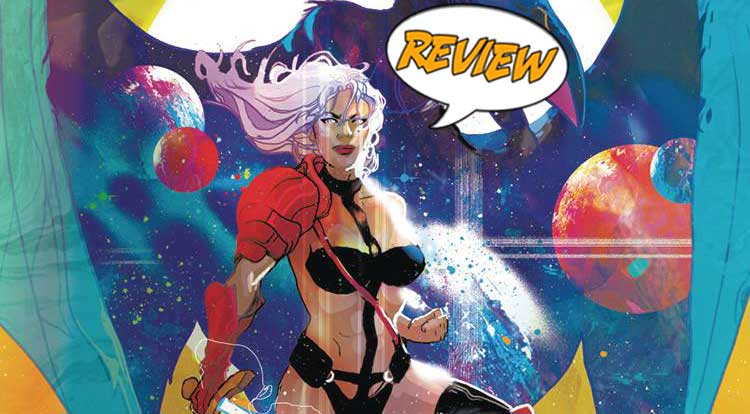 To defend: this is the pact.  But when life loses its value and is taken for naught, then the pact is… to avenge!  Your Major Spoilers review of Taarna: The Last Taarakian #1 from Heavy Metal Magazine awaits!

Previously in Taarna: The Last Taarakian:  From the death of the last Taarakian and a collapsed universe, Taarna was born.  And now, she returns in a new series of cosmic mystery and battles throughout the multiverse in her war against Kako, the embodiment of chaos.  This is the story of a millennia-old battle between godlike beings, with all sentient life caught in their path.

Somewhere in the galaxy, on an unnamed world, the population has come to realize that they are doomed.  Their sun is dying, and nothing can save their people now.  A creature named Neeran has to break the news of their impending doom not only to his people but to his young daughter, who cries that she doesn’t want to die, that there must be something that can be done, but Neeran isn’t able to comfort her until a shadow crosses their sun… the shadow of Taarna.  The last Taarakian and her bird-mount fly into space (!!) and she raises her sword much as we saw her do to destroy the Loc-Nar, with similar results.  A huge blast of cosmic probably-magic engulfs her, reigniting the sun and leaving the “goddess” to plummet to the ground below.  When the locals greet her, she ignores them all, stopping only for a drink of water.  As the people herald her as a god, Taarna gathers herself and flies away, ignoring their clamors and cries for aid.  She makes her way back to the temple which we all remember and, yes, takes off her clothes for her trademark languorous swim.  We also meet a creature who not only tries to protect her but narrates the issue.  As we fade to black, a familiar-looking green sphere is up to no good.

I honestly didn’t think this book would be able to take the Taarna of ‘Heavy Metal’ and make her work.  Honestly, she’s not exactly a traditional comic book hero, but Phillips scripting is really well-handled, showing her as a true force of nature.  Keeping up the terse (but not silent) characterization from her however-many-minutes of film fame, Taarna’s characterization is compelling but decidedly anti-heroic.  I’m also impressed with the art, especially the full-page debut of our main character and her flying friend.  It captures the grandeur of the movie’s art while adding in texture and additional nuance, and gave me goosebumps.  Zircher captures the essence of the character’s design without adding unnecessary touches, which allows for a balance of the animation style of the source material and his more detailed work here.  The only real complaint that I have about the story artwise comes in a couple of awkward transitions as she leaves the planet and returns to her temple, which seem like they may have been intentionally made obscure.  Either way, it’s a great looking issue.

BOTTOM LINE: THIS IS QUITE IMPRESSIVE

I had low expectations for Taarna: The Last Taarakian #1 but I’m happy to be proven very wrong by excellent art and a truly well-written story, making for a beautiful reading experience and 4.5 out of 5 stars overall.  I can’t tell you how happy I am to read a story that truly makes this character work, as I haven’t been the biggest fan of some of her previous continuation stories.  If you’re a fan of ‘Heavy Metal’, this continuation should be on your radar, but even if you’re not, it’s a pretty great comics book.

Yes, I'm a complete mark for the 1981 Heavy Metal movie, but this is visually impressive and quite well-written. I'm sold.