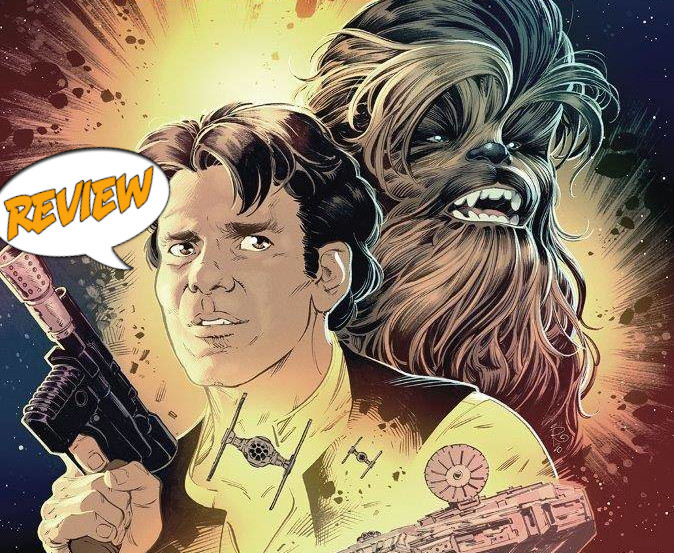 Han Solo and Chewbacca are back at it again! After the Battle of Yavin, the duo are assigned another secret mission for the Resistance. Check it out in Star Wars Adventures: Smuggler’s Run #1 by IDW Publishing!

Previously in Star Wars Adventures: Smuggler’s run is a novella published in 2015 that is now about to be adapted to the comic book medium. After the Battle of Yavin, Han Solo and Chewbacca hope to get their reward from the resistance and move on to new things. However it seems that Prince Leia may be able to convince them otherwise.

Princess Leia is able to convince Han Solo to help out in another mission. One that is imperative to keeping the Resistance alive! He must travel to the planet of Cyrkon and smuggle out Lieutenant Ematt. He has important information and they need to secure him before the Sith can. As they traveled into Cyrkon space, they were able to forge some papers and dock safely in the airport. However, Jabba the Hutt already has bounty hunters in every corner and Han Solo immediately finds himself in a blaster battle.

Meanwhile, Commander Beck of the Imperial Security Bureau is in charge of finding Ematt. She picks up a trail but finds herself in the middle of a gun fight between Han Solo and his would be captors. Han Solo is able to convince her to help him as he makes a quick getaway. Han is able to connect with an old friend to get some help while Commander Beck makes a deal with the Bounty Hunters for Solo’s head.

Han Solo has the worst luck. He is kind of guilted into taking this mission and as soon as he lands he immediately gets into a fight with people trying to kill him. It just never seems like Han Solo’s day!

Full Disclosure. I have not read the novella but I get the feeling that a lot of the subtlety of writing is lost on the comic book page. This book is extremely fast paced. Even when you get a forty some page book, it feels like we are skipping minor details to put things in the story. Now don’t get me wrong. I think the comic book works very well. I just feel like we could have more dialogue and subtle moments. With that being said. I get the impression that the target audience is probably younger kids. The themes aren’t terribly heavy or difficult to understand and everything is fairly explained. If we put the book in that context then the pacing works better.

The more I consider the target audience, the more I realize that I am not it. This is a fun light-hearted book that tells a quick adventure of Han Solo and Chewie. A book that is designed to only be two issues. I recommend this for people who are looking for more Star Wars content and as a fun gift they can give a middle schooler/teenager. They would get a kick out of this comic. $5.99 is also a steep price but you are getting twice as many pages as well and will provide plenty of entertainment. 4 out of 5 stars from me.

Han Solo is at it again with another adventure! Find out what trouble he is getting himself into.