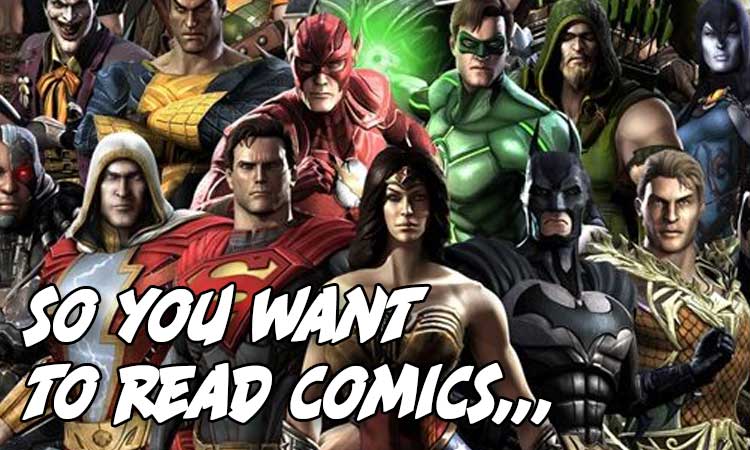 So You Want To Read Comics: Injustice: Gods Among Us Edition

It’s hero versus hero this week in “So You Want To Read Comics”, our weekly feature where we take a look at a single topic and then suggest some comics for new readers, based on that topic.  This week we’re continuing the video game theme and taking a look at Injustice: Gods Among Us.

Injustice: Gods Among Us is a game in the “fighting” genre, similar to something like Mortal Kombat or Street Fighter.  It tells the story of a universe where Superman has gone mad with grief and has formed a totalitarian regime with a handful of other heroes, in order to stop crime and villainy once and for all.  Of course a group of heroes headed up by Batman disagree with this approach and form an opposition group, people start punching each other, someone gets lasered in the face, it’s a fun time for all.

Fans of the game often point to how Injustice manages to take these familiar characters and make believable and understandable changes to them in order for them to fit into this story. Also, it doesn’t pull any punches and at times can be pretty brutal in how one superhero treats another.  It’s shocking to say the least.  Mix these story elements with a fast gameplay with plenty of special abilities that make you feel like you’re one of these super powered characters and it’s no wonder that Injustice: Gods Among Us is considered one of the best fighting games in the last 10 years and has already spawned a sequel.

But where do you go from there? Well, how about one of these:

Injustice: Gods Among Us: Year One – The Complete Collection

You can also purchase this volume via our comiXology affiliate link

Bit of a no-brainer here.  If you like the story in the game, you might as well then jump right on over to the comic series based on it.  What’s actually nice here is that this comic isn’t just a straight adaptation of the game, but more of an expansion on that universe.  This volume tells the story of how things get to where they are in the game and if you continue with the series show a possible ending to it all as well. It’s brutal just like the game and no one is safe from that brutality.  Also, since this is set in an alternate universe than the main DC comics continuity everything you see in these pages is self-contained and doesn’t need a ton of backstory to carry it.  Having a little extra knowledge does add some enjoyment but it’s certainly not a must.

You can also purchase this volume via our comiXology affiliate link

Okay, so this recommendation might not be well liked by some, but hear me out.  Kingdom Come is a story about a DC Universe where the older heroes like Superman, Batman, and Wonder Woman, are being pushed out and replaced by newer heroes who have a much harder stance on crime and are more willing to be fatal with their handling of villains.  This pushes the two groups into major conflict. The story premise is very similar to Injustice: Gods Among Us, and if seeing superheroes be in conflict with each other, both physically and philosophically, then Kingdom Come has that in spades. Now while there are some deep pulls from the DC comics history in this book, the main story is pretty straightforward as long as you know who Superman and Batman are.  No plot points hang on something outside of this book.

So what do you think?  These recommendations make the grade?  Do you have suggestions of your own?  Let us know in the comments section below.