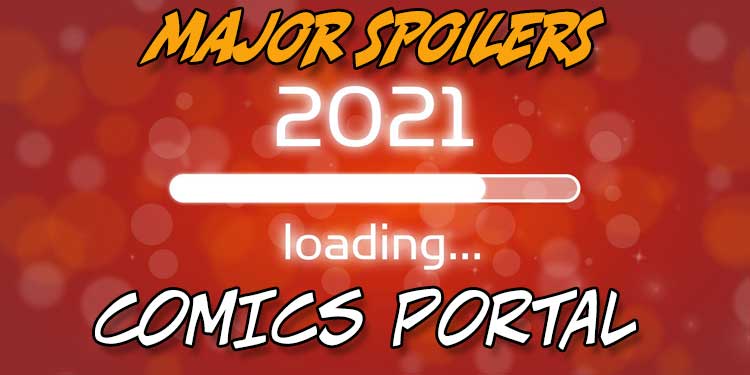 I’m getting a lot of emails with the theme, “Escape from 2020” as if this year were a bad Indie comic. Given the horror that has been the pandemic, I can understand that sentiment. Last year, I wrote a column where I talked about what I thought would take place in 2020. I have to admit that, in my wildest dreams, I never thought we’d see something like COVID-19 happen. However, I still did try my hand at prognosticating what would happen this past year. As per usual, some things I feel I did reasonably well with while the rest was way, way off. Let’s quickly see how I did!

First, I fussed at Marvel about what I considered their “flooding the market” with so many comics it would hurt the industry. Well, they’re still at it, and I still think it’s not good, but keeping this practice going is up to them. I hope they eventually replace quantity with quality, frankly.

I mentioned that those Walmart comics from DC were available in local shops, which “can’t be encouraging to the Big Store.” Well, those books are long gone, all right. I still miss them. What replaced them—a bag of comics I already have along with a “collectible poster”—just aren’t interesting to me. I don’t go to Walmart as often as I used to, and I don’t spend nearly as much money there these days, either!

Comics-related items, particularly those from DC, indeed have become a LOT harder to find, which I was worried about. It had a lot to do with the pandemic as well as DC’s pulling out from Diamond, something I didn’t see coming, either. However, those who thought DC would close as a result of that (not me, of course) were truly mistaken!

I also believed that Marvel would be the one to end $3.99 prices for comics and jump to $4.99. Instead, DC is the one that has made that happen more! Who knew?!

Here’s the rest of what I thought would take place: The “crate” mail-order industry continues, but no one I know orders from them any longer. I’m going to try and look into how they’re doing so I can write about it sometime soon. This was a no-brainer—Batman and Spider-Man continue to sell big. Duhhh. Digital comics continue to sell less and less—at least, from what I can see. Trades and other collections are still on the rise, including more stories going straight to trade instead of using “floppies.” Also, creators who are fan-friendly are still the most popular ones, something that has required bigger online presences since the pandemic hit. The one thing I take a lot of courage from is the fact that the comics industry, like many other businesses this year, took a serious body blow from COVID-19, and it is still going! When everything shut down, I seriously feared that the industry wouldn’t return, in any form. To my relief, DC kept distributing comics (which required me to find a different local shop that ordered their product), but it was worth driving a lot farther than normal just to support the industry! Then, when the rest of the producers and distributors started chugging back to life, I breathed a true sigh of relief.

While we did lose some shops—too many for me, honestly—it seems that overall, things are sort of returning to “normal.” Yes, DC is making big moves when it comes to firing personnel (something I think other companies will have to do sooner rather than later as well), but rumors of that company abandoning comics creation have proved unfounded. So far. Thankfully.

I am intrigued about the notion, though, that DC is interested in focusing more on book chains and other stores as opposed to local comics shops. I’m fascinated because bookstores have been on the decline in recent years. Some chains have completely disappeared, such as Waldenbooks. I’m not convinced that leaving LCS’s behind is a smart way to go because those establishments are created specifically to make comics available. Granted, many local comics shops are often holding on by a thread, but I don’t see bookstores in any better condition. I think we still haven’t found the solution to all this, and I remain convinced it’s not Amazon.com (Do they still even sell comics?) or Loot Crate.

I mentioned in a column a week ago that I do believe that comic conventions will return in the coming year. I keep hearing from creators I know that they were seriously hurt by the pandemic—specifically due to the shutting down of cons. Many are literally champing at the bit to get back on the con circuit. A lot of smaller cons are already announcing events in early 2021. I expect we’ll hear more about this as the vaccines are distributed, but we’ll see! The industry continues to evolve, and I wish I were good enough at predicting the future to know what the end result will be. I’m not, though. However, I do have some expectations I should share.

Batman’s presence will keep growing, but not the Bat-Family. DC recently made moves that keeps me thinking that the Dark Knight will continue to sell comics and related items. However, with Batgirl going back to being Oracle and Batman Beyond being cancelled (I love that book!), I’m not certain about Batman’s entourage. It’s interesting to me that Damian doesn’t know what he wants to be when he grows up, and Red Robin is back to calling himself Robin (at least, for now). Batwoman is on the sidelines as well. I think we’ll see many of Batman’s family quietly fade away while Bruce keeps getting more and more titles featuring just him, mostly. I find it curious that this is happening after Dan DiDio, who believed (and said so often) there should only be Batman and Robin, is no longer with the company. I’m on the fence about the Robert Pattinson movie and the Future State Batman, though.

The Eternals will not take off. I still think that a book about godly characters in Marvel (that primarily has characters who are everyday people) just won’t catch on. Hey, Jack Kirby couldn’t sell them! As much as I like the creative team on the new book, I’m not optimistic about The Eternals. Yes, I’ll buy it. However, I don’t hear a lot of support from my friends who are big Marvel fans. I fear for their movie that is supposed to be released later in the year, if this is the case.

Some big advance will make digital comics more successful. I have this gut feeling that something, maybe in one of the technological fields, will happen this year that will shine the spotlight on digital comics, enhancing their popularity. Just what that would be, I don’t know. But I think digital comics will jump ahead significantly due to a high-power tech happening. We’ll see!

I also think DC’s “Future State” will do okay, their soft “reboot” will eventually work, Marvel’s Venom will start to wear thin, the House of Ideas will finally run a month without one or two or three “big events” in it, and Hawkman will return! (Hey, I can dream, can’t it?)

What I REALLY want to have happen in 2021 is to never hear the word “pandemic” ever again! And “COVID-19” or any other number, too! I hope we can make masks a thing of the past and that we can go to movie theaters and comic conventions again! Yeah, all that would be worth celebrating when we return to normal… whenever that takes place! I expect it truly will happen, too!

I also believe that there actually WILL be a comic called “Escape from 2020” that will focus on a group of time travelers who get stuck in this year and cannot leave it behind! Unlike them, though, you and I will put 2020 in the history books late this Thursday night. And I’m greatly looking forward to it!

What do you think? What will happen to the comics industry in 2021? Will it be the year things turn around or will comics sales go downhill? What predictions do you have for the coming year in comics? Will we leave the pandemic behind? Please be sure to share your thoughts below and have a Safe and Happy New Year in 2021!