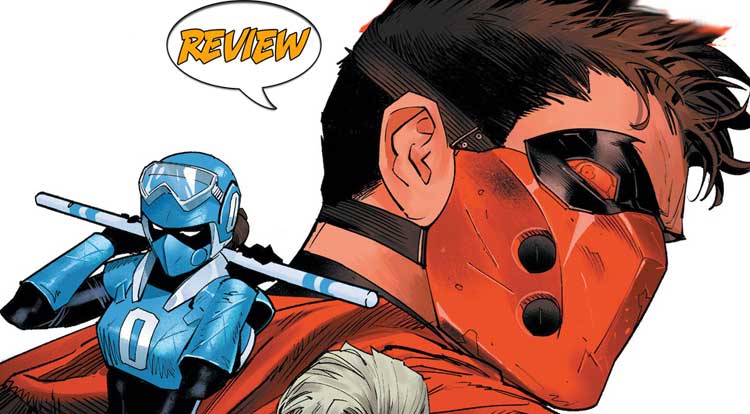 They say you can’t go home again, but Jason Todd has never been one for listening.  Your Major Spoilers review of Red Hood #52 from DC Comics awaits!

Previously in Red Hood:  After making his dramatic return to Gotham City, Jason Todd finds himself in the middle of a turf war between a violent gang aided by Killer Croc and a new group of vigilantes dedicated to protecting his old neighborhood of the Hill.  When a childhood friend is targeted for assassination by a vicious new crime lord on the rise, the Red Hood must forge an uneasy alliance with the vigilantes to save her.

“AREN’T YOU MISSING SOME OUTLAWS?”

We open with an explosion, which is a bit on the nose, honestly.  Red Hood has saved would-be vigilante Dana Harlowe from certain death, only to find that the bombing is the work of Killer Croc and Tommy Maxx, whose motivations are a bit unclear.  He manages to track down Croc and have a discussion, but Tommy’s plan is already in motion, and he discovers that he’s being distracted from the real attack, a two-pronged shot at Dana and her sister, news anchor Denise Harlowe.  Red Hood manages to save Dana/Strike, but teams up with her to bring down Tommy, putting him in the hospital while Denise broadcasts the details of his crimes.  Killer Croc slips away unscathed, but as the issue ends, Jason and Dana find a package, a “housewarming gift” from Jason’s errant adoptive dad, who skulks in the shadows.

Though I like the changes that Joker War has had on Gotham’s status quo, this issue feels very familiar to me, with Jason’s current life feeling quite a bit like Nightwing’s run as Ric Grayson.  Not only does he have a vigilante group to oversee, not only does he have a new girlfriend with secrets of her own, but he’s building a new life with Batman agreeing to stay out of things as he gets his head together,  It’s actually something I’ve seen half a dozen times, and while I find Jason and Dana’s relationship rather sweet, it’s hard not to feel like I’ve seen it all before.  I like most of the art throughout the issue, but the coloring of Jason’s costume is inconsistent throughout the pages, which may have something to do with the multiple pencilers.  All in all, though, I’m most disappointed at the lack of identification of the characters, as half the names required me to consult with the DC wiki for confirmation.

In short, while Red Hood #52 provides Jason Todd with some development past “angry ex-Robin who died that one time, it does so in a very familiar way and the inconsistencies of the visual combine with some storytelling missteps for a slightly confusing read, earning 2.5 out of 5 stars overall.  I do want to read more of this book, but mostly to see how these creators grow and whether or not we finally get to see Jason Todd get over his various traumas, but I also want to see some fresh concepts as we get there.

This issue feels like very worn territory, reminding me of half a dozen previous stories, including Nightwing's most recent run AND his time in Bludhaven, but at least Jason Todd seems to be mellowing a bit.