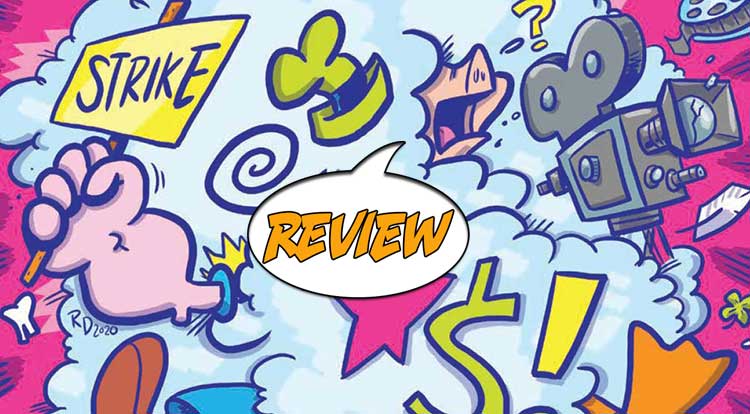 From hundreds of uncredited artists to the big names we know, animation is off to the races! And now improved with sound! And color! Check out The Comic Book History of Animation #2 from IDW Publishing!

THE COMIC BOOK HISTORY OF ANIMATION #2

Previously in The Comic Book History of Animation: We were taken on a whirlwind history up through the silent era. Vaudevillian artists, called chalk talkers, paved the way for people to be entertained, first by films of artists, and then by artists creating film animation. Innovations followed, and many of the big names we know got their start. Thomas Edison dominated the early film industry on the East Coast, but as the industry moved west to Hollywood that started to change

The Comic Book History of Animation #2 opens after Walt Disney, at his start, has lost nearly everything. He wasn’t an artist, but he was a businessman, and he wanted to get in on this potentially lucrative business. At this point in time, Felix the Cat was all the rage and remained so until the death of his creator (and subsequent legal limbo). Having an idea for a cartoon mouse was not enough.

Shortly after this, sound came to motion pictures and Disney made it his goal to be the first to add sound to animation. Steamboat Willie wasn’t quite the first, but it did launch Mickey Mouse. Disney also set up his own recording studio in Hollywood, at a time when all the other studios were still on the East Coast, to bring more cash into his company. This was followed by   Disney’s Silly Symphonies which were also hits. But Disney’s personality lost him his best animator and innovator, Ub Iwerks.

The next big hit in the animation world was from the Fleischers’ studio – Betty Boop. Her adventures were a little on the bawdy side, a reminder that at this time, cartoons were not just made for kids. Moral outrage led to the Production Code Administration and Betty gave way to the next big thing, Popeye. Then Warner Brothers came out with their first big Looney Tunes star, Porky Pig, who was followed by Daffy Duck and finally Bugs Bunny, characters who also brought us the amazing voice talent of Mel Blanc.

What was next for animation? Why, color, of course! Disney managed to land an exclusive two-year contract with Technicolor for using their three-color process, leaving his competitors stuck with black and white or two-tone Technicolor. Even that was barely enough to get past his incredible insistence on quality. That quality, including the effort of redrawing segments, was expensive. And these were still short films.

Disney then created the first animated feature length film, Snow White at huge cost, to huge acclaim, and amassing a huge profit. Fantasia, on the other hand, flopped (in part due to the special sound system that had to be installed in theaters so they could show it). Animation was a complicated business, still growing and changing and with a lot of tension behind the scenes.

BRINGING THE MATERIAL TO LIFE

There is so much material to cover in The Comic Book History of Animation #2 and again the art does some of the heavy lifting. In a few short panels, we really understand how tracing coins could be used for consistent heads and bodies of characters, and how it takes only a few changes in the ears and tails department to make the same body look like an entirely different character. The tumultuous interactions between people in the industry are deftly captured with a few evocative scenes as well.

When the transition is made to color in animation, we get full color in the art. During some of the tough times for Disney, I like how they use images based on the films and combined with the characters being discussed. Symbolism can be an amazing thing. And even though some of these films are old, they’re so familiar in pop culture that we do recognize them.

Drama, new technology, money, competition – The Comic Book History of Animation #2 has it all. It amazes me how quickly animation became such a big thing and how its appeal has lasted over the years.

The Comic Book History of Animation #2

It amazes me how quickly animation became such a big thing and how its appeal has lasted over the years.