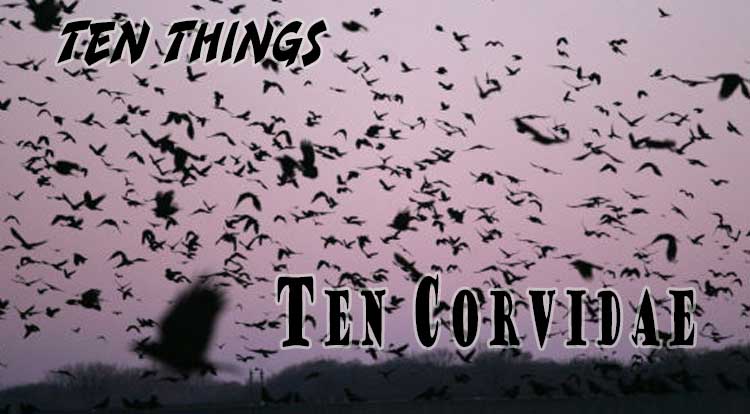 Gone away is the blue bird… here to stay, is a new bird!  Actually, TEN of them!  Welcome to Ten Things: Ten Corvidae!

Whooshman-Bicarbonate Films, in conjunction with An Amateur Comics Historian and Azarath, Metrion and Zinthos, Attorneys at Law, Presents: Restin Dane is the grandson of the man who inspired H.G. Wells ‘The Time Machine’, and uses his familial gifts to travel through time and space.  Billing himself as The Master of Time, The Rook traveled back and forth through the time line to prevent paradoxes and even thwart a war between Morlocks and Eloi with grampa.  He has a particular love of the Old West, adopting weapons and clothing of that era as his trademark.  Restin eventually became a superhero, of sorts, with a truly ugly costume/living power suit, because 90s.

The rook (Corvus fugilegus) is found in Scandinavia, western Europe and eastern Siberia. Hailing from Earth-39 in the ‘Multiversity’ version of DC’s Multiverse, Corvus is a member of the Agents of W.O.N.D.E.R., whose powers are technologically-based.  As with all his teammates, extended use of the tech can be dangerous for them.  If this sounds familiar, it’s because the AoW are analogues of the T.H.U.N.D.E.R. Agents, with Corvus a pastiche of Craig Lawson, T.H.U.N.D.E.R. Agent Raven.

Corvus is actually a genus of Corvidae birds, including crows, ravens and rooks. Originally an ally/lackey of The Leader, Heather O’Gara clashed with The Hulk and The Avengers before being cut loose by her big green-domed boss.  She fell in with Superia, joining her all-female villain team, The Femizons, where she was personally beaten down by Captain America. which may be some sort of honor among the ne’er-do-wells of the Marvel Universe.  Either way, she hasn’t been seen since that 1993 beat-down.

Jackdaws are two species of genus Corvus, sometimes identified as their own genus, Coloeus.  They are the western jackdaw found in Great Britain and Europe and the Daurian jackdaw, found in China, Siberia and Japan. Though his real name is unknown, The Raven goes by the alias Robert Campbell.  A student of martial arts, Raven was part of a special black ops team and was betrayed by one of his own, left for dead, entombed in a shallow grave.  Giving up his mercenary ways, he moved to Damark City, where he fights crime as a deadly avenger of the night.  He may or may not be inspired by Ace Comics’ Golden Age superhero, last seen in the early 1940s.

Ravens are actually hard to differentiate from crows, and are generally assigned due to being slightly larger in size. An avatar of pure chaos, Carrion Crow tried to destroy nature itself on behalf of the villainous Chaos King.  He was opposed by a team of deceased X-Men led by John Proudstar, Thunderbird.   Though the mutants were only back-from-the-dead for a short time, they successfully took down Carrion Crow with the help of Thunderbird and a Native American nature spirit.

The carrion crow is black, with a green or purple sheen, and is slightly smaller than the hooded crow or common raven. An Inhuman warrior who gained wings from exposure to Terrigen Mist, Pinyon’s single claim to fame was in taking out the Human Torch before he could infiltrate Attilan in search of his girlfriend Crystal.  He briefly appeared 45 years later in what amounted to little more than a visual cameo.

The pinyon  jay is known for it’s call, a rhythmic “krawk-kraw-krawk”, repeated two to three times. Hailing from an alternate Earth-like world called Angor, Jay Abrams can not only fly, but shrink as well.  After his world was destroyed by nuclear war, he and his teammates came to Earth and clashed with the Justice League over the proliferation of atomic weaponry.  Jay later became a member of Justice League International, where he was disrespected at every turn and eventually left Earth to search the multiverse for a new home.

The blue jay is known to be very aggressive, attacking and even dismembering other birds and destroying their nests. Irwin J. Schwab never made it into the Legion of Super-Heroes.

Genus Nucifraga, aka nutcrackers, can be found around the globe, and their primary food resources are pine nuts.  Their pointy bills are perfectly formed for extracting these seeds from pine cones. A minor member of Batman’s Rogue’s Gallery, Margaret Pye was a kleptomaniac and fan of punk fashion who had a simple goal: Get all the shinies for herself.  This led her into conflict with Superman and Batman, in their first joint mission, and was sent to jail for a long stretch.  Upon her release, she fell in with Gotham’s gangs and was murdered as part of the Tally Man’s attempt to take over the Penguin’s empire.

The Eurasian magpie is known as one of the most intelligent animals in the world, even able to identify themselves in a mirror.

Murdered by gang members under the control of Top Dollar, Eric Draven’s spirit was returned to Earth one year after his murder to deal with his fiancée’s killers.  With the help of police officer Albrecht, he hunted them one-by-one, bringing all the killers to justice before Shelly’s spirit took him into the afterlife.  His story is made even more tragic by the accidental death of his actor, Brandon Lee, during production.

Crows have been known to remember human faces and hold grudges, even teaching other birds to taunt and respond angrily to specific human beings.

This week’s topic, Ten Corvidae is all me (Ka-KAAAAW!!!!) but feel free to follow along @MightyKingCobra for more Ten Things madness on Twitter!  Or you can check out the full Twitter archive here!  As with any set of like items, these aren’t meant to be hard and fast or absolutely complete, but… this one actually kind of is.  There are only so many birds in any given family.  Either way, the comments section is Below for just such an emergency, but, as always: Please, no wagering!