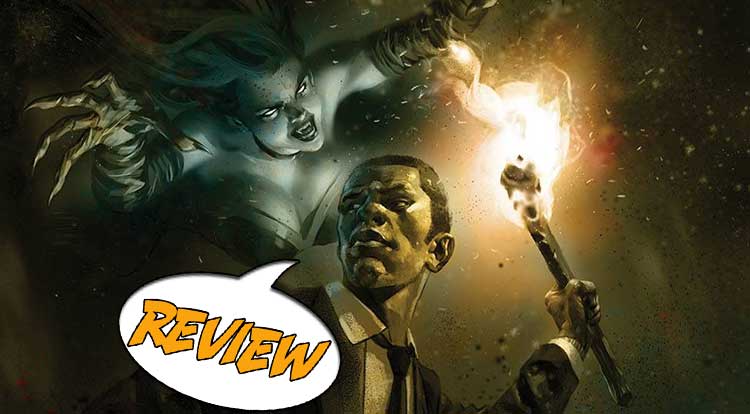 Philadelphia has gone dark and Jupiter is turning on Abigail. Will this put a stop to her plans? Find out in Killadellphia #11 from Image Comics!

Previously in Killadelphia: We learned Toppy’s story. He went West to find a new life for his family after the Civil War, but his past finds him and the Adamses recruit him. Things are in chaos in present day Philadelphia, especially with modern communications down. Lieutenant Zimmerman is taken by the vampires. The loss of this friend and good man hits James Sangster hard and he takes this out on his son. The theme of anger comes through clearly – what lengths will someone go to out of anger?

LOVE DRIVES US ALL

Killadelphia #11 opens intriguingly with John Adams reminiscing about the high point of his life – his presidency. And he has time to reminisce because he is in purgatory. We see him as his eighteenth-century self, probably because that’s when he died as a human. As he ponders, he sees someone approach. It is Tevin, the young vampire who killed him.

In the city, Jupiter continues to wreak havoc like a one-man army of destruction. Abigail watches, seeing the ferocity and thinking she understands it, as well as finding some eroticism in it. She sees something else in him, and that is her end. As she waits for him to approach, she visits her own memories, memories of being in love. And what Abigail remembers is the time when John took leave, and Jefferson died. She was alone; she was at Monticello; and she found Sally Hemings. Abigail and John took Sally home with them, and she and Abigail developed a serious relationship over the years.

If the Sangsters have learned anything, it is to talk to one another more. James finds himself back in the fight he always loved, except that he realizes that he is technically on the side of the enemy. Still, they need to plan what to do next.

Tevin and Adams have a fascinating conversation. Adams was going about things the wrong way, Tevin insists; he needed to die. But without him, Tevin feels he has no mission, no purpose. He wants to be free, but the world is still a problem. He knows Adams’ life is done and the fact that he was president is no longer relevant. But he thinks Adams can still somehow make things right. This is the proposal he puts to him, and Adams agrees. But Tevin has a more important mission. He stops in heaven to see his grandmother, a person he loved all his life and into his afterlife, and the one who still loves him.

But what of Abigail’s love? She remembers Sally as her love, but the truth is that even though she professes to believe it, her commitment to John was more important. They broke up and it was a painful parting. (And what of Sally? With an ending like this, was her relationship with Abigail any more meaningful than hers with Jefferson?) But with John now actually dead, a fleeting thought of Sally crosses Abigail’s mind.

This is a fascinating issue. While last issue was all about anger, this one focuses on love, and different sorts of love that are so strong, they can reach beyond the grave.

The art of Killadelphia #11 is spectacular. There is simply no other word. The range is incredible, from moments of breathtaking, often beautiful realness to scenes that are nightmare fodder. For the latter, consider the opening. John Adams stands before the government and as everyone smiles and applauds him, we see the flesh melt from their bodies until he is alone, presiding over a hall of skeletons. His purgatory is a gray and lifeless forest.

In Abigail’s storyline, there is an incredible contrast between peace and violence. Jupiter’s rampage is horrifically bloody. Having slain his way through humans, he takes on vampires just as fiercely. And Abigail closes her eyes and remembers. We even see a panel where the closeup of her face is placid and beautiful. With her eyes closed, she looks quite human. But in the background, we see the silhouette of Jupiter, relentlessly moving toward her. If we learn anything from this issue, it is that she is a much more complicated character than she first appeared.

BOTTOM LINE: A STUNNER FROM START TO FINISH

Killadelphia #11 has taken the vampires from a hoard of nameless monsters to broad group of individuals, each with their own pain and their own reasons for becoming a vampire. We may not like them, but we understand them, and that gives this book an incredible depth and sophistication.

Is Abigail driven by love, or power, or some complicated mixture of the two?