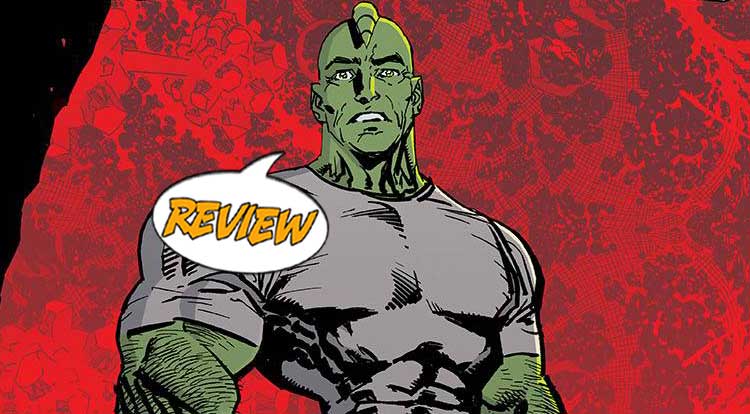 The Original Savage Dragon is back, and he wants to know one thing: Why is his wife’s grave empty?  Your Major Spoilers review of Savage Dragon #255 from Image Comics awaits! Previously in Savage Dragon:  Paul Dragon travels to Dimension-X to visit the grave of his departed wife, but he gets more than he bargained for.

DID I MISS AN ISSUE?

After last issue’s battle with Dart and the revived Vicious Circle, we pick up with Paul, the elder Dragon, and his lady friend Alex, discussing the death of his wife Jennifer in Dimension X.  Paul insists that he has to see her grave to be certain, and Alex agrees to accompany him.  Angel, Malcolm’s step-sister has a quick comedic interlude discussing her weight gain during the pandemic, ending with her husband joking that she might need to just go on a diet.  Smash cut to Dart’s brains being blown out, graphically and on-panel.  Her forces are quickly overrun by Canada’s super-team, North Force, who quickly arrive to clean up the mess, including tons of dead bodies and a gravely wounded Malcom Dragon.  It’s some of the bloodiest stuff I’ve seen from Erik and Savage Dragon, and that’s…  that’s saying something.  While Maxine worries about her critically injured husband, Paul and Alex find Jennifer’s grave empty, only to track her body to the nearby lair of a group of flesh-eating predators.  There they find her skinless head impaled on a pike, and Paul finally admits that she’s gone…  while a Dragon-baby watches from the shadows.

WOW… THAT WAS GRIM

Not even a He-Man style tangent in the Vanguard backup strip can clear the palette of this issue’s blood and guts, reminding me that Savage Dragon is a book that has no limitations other than what its creator wants.  Much like the sex sequences since the late 180s of the book, this issue’s violence is aimed entirely at adult audiences, but the gore factor here is remarkable.  That’s not to say that it’s a bad issue, I actually enjoyed much of it, but the sight of the hero’s dismembered body is a shocking moment in any narrative.  Larsen’s visuals don’t hold back at all, and it makes for some truly memorable moments, while this issue’s story makes me worry that we’re going to see Paul Dragon take the main narrative and Malcolm return to the supporting cast, and I frankly would not be happy were that to happen.

BOTTOM LINE: SHOCKING, BUT NOT A BAD COMIC STORY

I get the sneaking suspicion that Savage Dragon #255 is setting up for big changes, whether it be a return to the United States now that a certain someone is no longer President or a switch in main character, and the shocking moments herein work on multiple levels, making for 3.5 out of 5 stars overall.  Wherever this goes, I’m still onboard based on Larsen’s skill at storytelling and artistic flair.  I just hope we don’t see graphic murders every issue.

It's not for the squeamish, the timid or those with weak stomachs, but there are some impressive moments in these pages. Even with my concerns, it's a strong issue that sets up for what's coming.