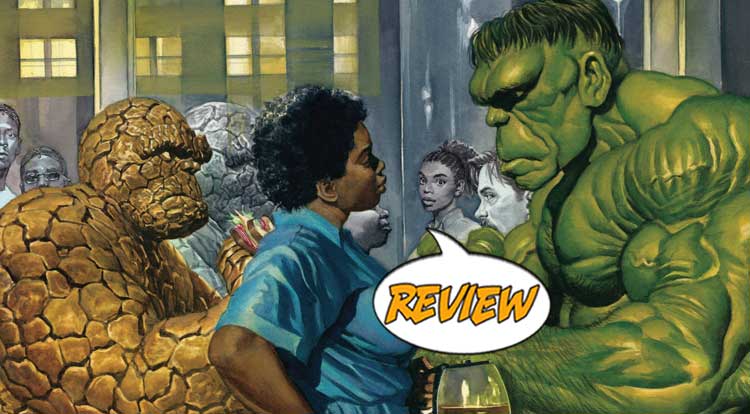 Previously in Immortal Hulk:  The Hulk is broken, friendless and hunted. In every way, he’s a shadow of his former self…

Last issue, Hulk (or, more specifically the child-like Hulk and Joe Fixit personalities in a body that may or may not be human any longer) literally threw themselves out of a space station and crashed to Earth.  Unfortunately, The Thing was waiting for them, and while both Hulks have beaten Ben before, they’re… not really up to the task.  Elsewhere, Charlene McGowan has made her way to her hidden safehouse, ready to seek revenge on Samuel Sterns, to help her friend, The Hulk.  Ben Grimm likewise wants to help, and when Joe Fixit takes over the Hulk’s form in mid-battle, he’s horrified to see his blow shatter Joe’s entirely-human arms.  The two of them take a moment to talk it all out over a hot dog, and Fixit explains that Banner is gone, Devil Hulk may be dead and it was actually the leader who caused his high-profile meltdown in Iowa a few issues ago.  Fixit tries to explain The Green Door, asking The Thing about his death a few years ago: “You go upstairs?  Or downstairs?”  When The Thing responds that he went upstairs, Fixit scoffs that there’s not way that he can help them.

UNEXPECTED CHARACTER DEVELOPMENT… FOR THE THING?

This issue is pretty wonderful as it ties (for the first time that I can remember) Ben’s death and resurrection to his return to Judaism and his decision to have his much-delayed Bar Mitzvah, explaining how he studied the story of Job, and…  It’s kinda perfect.  When The Thing agrees to let him go, even buying Fixit a shirt so he can go unnoticed, it’s a truly impressive moment, a bit of friendship between two men who have clashed for years and might have finally come to an understanding.  Bennett’s art is truly excellent throughout, making the back-and-forth between Joe and Ben as exciting as some of their previous battles and ending with another twisted inhuman gamma mutate returning from beyond.  Who is it?  I can’t even tell you, since The Leader is Brian Banner and Doc Samson is Sasquatch and it’s anybody’s guess where in the world Bruce Banner is.  But this issue beautifully demonstrates that even The Hulk has friends, and perhaps it’s time that they come together to help him.

The best part of Immortal Hulk #41 is the effortless way it reframes The Thing, one of the pillars that holds up the Marvel Universe, making him part of this story while still making it about our main character and the various personalities that he has, earning a dead-solid 5 out of 5 overall.  The choice to turn this book into a superhero/horror mélange has revitalized The Hulk as a character and a property, and I sincerely hope that Ewing isn’t done with him any time soon.  Either way, I look forward to somebody punching The Leader right in his big ol’ giant-headed face, as soon as possible.

It's a new take on Hulk Vs. Thing, and Ewing's script combines with Bennett and company's art to give us the beginnings of a beautiful frIendship.