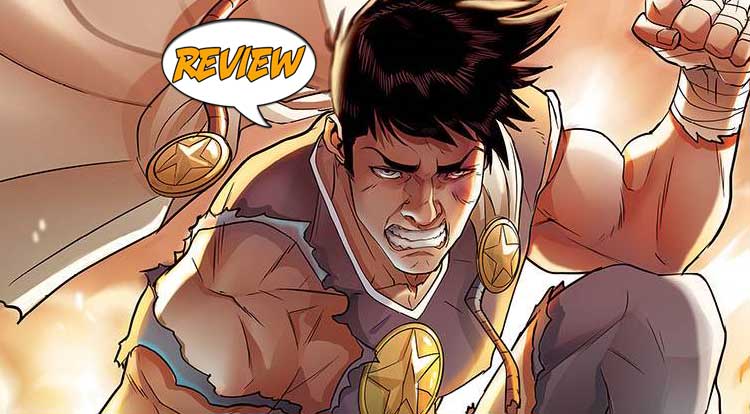 Five superhero presidents from five alternate universes must unravel the mystery of the death… of Empathy itself?  Your Major Spoilers review of Commanders In Crisis #3 from Image Comics awaits!

Previously in Commanders In Crisis:  The Crisis Command interrogates a ticking clock corpse!  But how can heroes save a world without empathy? FIRST they have to figure out how to save it within themselves, as Nina Next, the incredible science hero Frontier, takes John Doe Empathy out on the town… to discuss their secrets.

Our story begins with a flashback to the murder scene, and a rather horrifying one at that, as an unknown murderer literally DRINKS THE BLOOD of John Doe/Empathy, all the while watching Senator Nelson Next arguing his American Individuality Act on the floor of Congress.  Meanwhile, at the headquarters of Crisis Command, the deceased has been returned to life, announcing that his name is Simon and receiving the disturbing news that he has been returned from the dead for 24 hours.  Frontier seems to know a lot more about Simon than she lets on, sending the rest of the team out to battle the threat of the Social Callers, while she spends some time helping Simon come to terms with his mortality.  While in the field, Prizefighter, Sawbones, Originator and Seer find themselves arguing over tiny slights, a side-effect of the loss of empathy, forcing Originator to use her powers to return the ability to consider other perspectives to the world, though only for a day.  Using the information that Simon remembers, the team seeks out a lead in their murder case, only to end up on the wrong end of a gun!

I enjoyed this issue, but based on the success of the first two, I still felt a bit disappointed in the admittedly very good comic we got.  The Social Callers’ schtick of attacking people through text and phone calls, leaving behind corpses who only care about protecting their phone seems a little clumsy as a metaphor, and Frontier keeping secret that she seemingly had a relationship with Simon in some universe seems wrong to me.  That said, the issue once again showcases wildly creative ideas and powers, and focuses on Simon’s life rather than his murder, which I very much enjoyed.  Tinto’s art is once again lovely, with a unique take on the faces and figures of our heroes that feels perfectly superhero-appropriate, but makes it clear that they’re real humans.  There’s traces of Steve Ditko in there, as well as a true talent for storytelling and figure work that makes each page pop, even when it isn’t costumes in combat.  I also like the suddenness of the last-page cliffhanger moment, balancing absurd and scary all at once and really making me want next issue right away.

In short, if Commanders In Crisis #3 suffers, it’s only in comparison to the first two issues, and what we get here is still very well drawn and written, with the same wild and over-the-top concepts that make this universe so fascinating, leading to a 3.5 out of 5 stars overall.  This series was a surprise to me, but I’ve been a fan of every issue to date, and will likely recommend the collected edition once it’s all completed and collected.

Some sweet, some bitter, some all-out action and a surprising ending make for a full comic-reading experience.