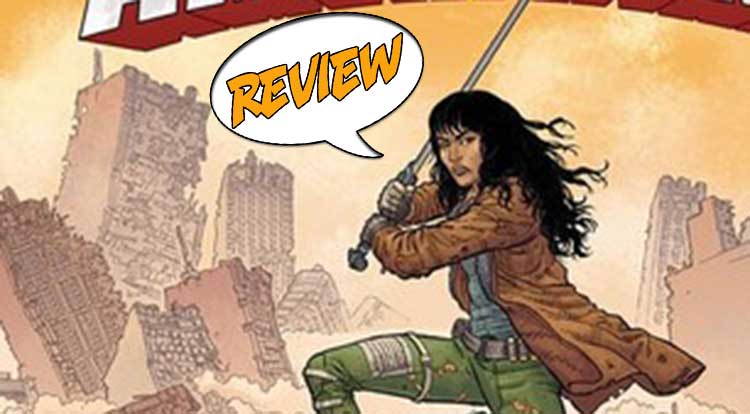 In Post Americana #1, the Big Death has laid waste to the world.  The One Per Centers have retreated to the Bubble, while the rest of America dines out on itself.  But now the rebellion has just gotten started.  Will Truth, Justice and the American Way triumph? Find out in your next mighty Major Spoilers review! Previously in Post Americana: When the Big Death came to America, the elite found shelter in a government bunker beneath a mountain, and began planning for their eventual escape to the surface and re-conquest of a fallen nation.  But to do that, they had to ensure that all rebellious elements were defeated, which proved impossible.  Now, as a rebellion simmers below ground, outside, the remnants of America form their own, man eating communities.

As dystopian hellscapes go, Post Americana #1 is right up there with some all round weirdness.  Decades after the Big Death cut a swathe through the American heartland, a monied elite has grown to power within the Bubble, a bunker beneath a mountain.  These one per centers have lived a life of safety, while outside, American has gone to hell in a handbasket.  And developed a taste for man flesh…

There is a lot, and I mean a lot, going on in Post Americana #1.  It’s a satire on income inequality, taken to the nth degree.  It spends a lot of time talking up the virtues of cannibalism.  There’s a rebellion, a cynical gun for hire and cannibal death cults seemingly under every rock.  It’s come to life amidst the chaotic handling of covid in America, and has something to say about the polarized state of American politics today.

What it also is is deeply, deeply funny.  Offensive as hell, but funny too.  As I mentioned earlier, we have a character espousing, at length, the virtues of cannibalism.  His comments that the cannibal lifestyle is so much more than simply eating people, that it is all about keeping a balance in a world tipped upside down, is so heartfelt that you have to realize that he’s talking about eating your fellow man.  I mean, needs must when the devil drives, but come on…

There is nothing Post Americana #1 won’t look satirize.  Politics, war, the comics industry (the greatest American art form, natch), square jawed heroes and cynical opportunists – it’s all in the mix in this strange, off kilter comic.

Writer and artist Steve Skroce is having a ball.  Not only is the dialog just flat out fun, but the visuals are also cray cray.  Skroce’s art reminds me of the work Geof Darrow did for Frank Miller’s Hard Boiled many, many years ago.  Darrow’s insane attention to detail, where he packed each and every panel with as much imagery as possible, appears to me, at least, to be Skroce’s starting point.  The world of this fallen America, inside the Bubble, and outside, is filled with detail – whether it is soldiers and military hardware, or the desolate ruins of a city broken by decades if pillage and plunder.  The scenes of violence owe a lot to Darrow – bodies are torn apart, eyes dangle from their sockets, people are pecked to death by mutant chickens, crowds of people burst to part under a relentless fusillade of bullets.  It’s an overwhelming, exhausting (in a good way) visual experience that matches the frenetic nature of the writing and plot.

Post Americana #1 grips you by the throat and never lets up.  After a boisterous opening, it settles into a lot of casual violence, while along the way you learn a lot about how terrible this new America – of cannibal death cults, pious rebels, and death dealing mutant chickens – really is.  There’s a lot to like in this opening issue, if you can stand the high levels of brutal violence, laced lovingly with a ever so slightly twisted sense of humor.

There’s a lot going on in Post Americana #1, in terms of the set up for future issues. Skroce expertly handles the introduction to the setting and the main characters, while along the way, takes a knife to just about every major American cultural point over the last decade. It’s fun and furious, and just a little bit dangerous.