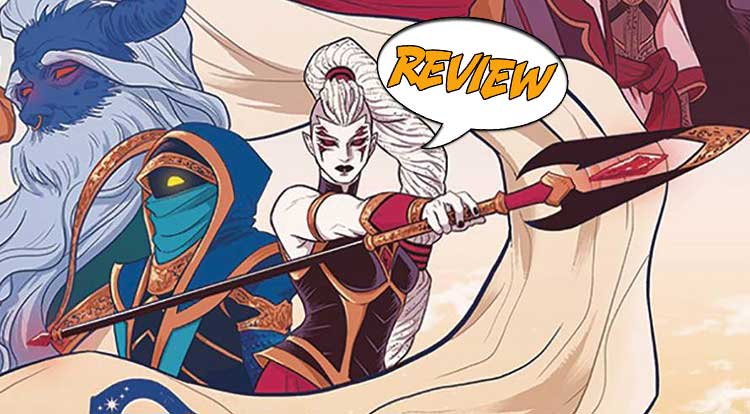 Sera and the Royal Stars #10 Review

It’s the climactic battle between the twin stars of Draco and the daughters of Parsa! Who will survive and who will be changed forever? Find out in Sera and the Royal Stars #10 from Vault Comics!

SERA AND THE ROYAL STARS #10

Previously in Sera and the Royal Stars: The Twin Stars of Draco move forward with their plans. Roya returns to Sera with their mother. They have only a brief reunion before they meet Fomulhaut and Aldebaran at the Temple of Regulus. They have the blade from Algol, but neither of the can wield it. Sera says she will, but on touching the sword she is consumed by visions of darkness and of the world falling into ruin. Aldebaran explains that the power of the sword is too great for any of the stars to handle; it must be Sera. And when the see the light of Draco approaching, Sera accepts the blade and its consequences.

THE DAUGHTERS OF PARSA AND THE STARS UNITE

Sera and the Royal Stars #10 opens as the stars of Draco approach, but Eltanin and Rastaban are not alone; they are bringing their own stars with them. Sera quickly realizes they have to engage them now, before their summoning is complete. Eltanin and Rastaban take hands and transform into a giant two-headed dragon.

A fight ensues, and it takes everyone working together just to hold Draco off. Even so, all the power of all of the stars can hardly make a dent in the dragon’s hide. They regroup and continue to work to get Sera close enough to strike. And strike she does! Her blow forces the twin stars to separate. Then Sera uses the sword to kill Rastaban. As Eltanin realizes this and gets up, ready to rush Sera, the shard of star in Sera’s heart becomes active and Regulus himself appears.

Eltanin chooses to run off. But at this point, the stars have nearly depleted their powers and they must return to their actual stars. Once they’re back in their proper places, the seasons will return, and the land will become fruitful again. (I love this book, but the wandering adventure has been so engrossing that I nearly forgot this was one of the big problems back in the beginning.)

But in an interesting twist, the women of Parsa discuss what to do next and realize that they can’t all just return home again. They ride east, watching as the lights of the stars above them flicker out in a vigil for Rastaban. And as they ride, we see the text of Sera’s letter to her father as he reads it again. She talks about the visions she has, much as her mother must have, of destruction coming to Parsa and her people, and of the feeling of intense need to leave her people in order to protect them. It’s poignant and even bittersweet with just a touch of hopefulness. It’s very much been a hero’s journey, except that our heroes understand that they cannot go home again.

The art of Sera and the Royal Stars #10 continues to be absolutely breathtaking. The two-headed Draco is one of the best-looking dragons I’ve seen. To do a two-headed dragon is tricky, but Draco’s bulky body looks sturdy enough to support both heads. When we first see him, he’s lit in front by a dying fire while behind him plumes of smoke glow deep red, reflecting the flames. Sera and the Stars who stand with her are deeply shadowed and look so small by contrast. Draco continues to be menacing, the two heads working in tandem in the fight, clearly keeping an eye on things from all directions.

The fight ends as dawn comes, and the stars take their leave as the sky brightens. The coloring is lovely throughout, but these skies have a subtle glow that is particularly beautiful. It leads perfectly into the montage of the Daughters of Parsa making their way east in the world, and we see the glorious dawn turn into a rich purple darkness as the land itself starts growing again. It ends as dawn comes again, but if anything, even more majestically than last time.

Sera and the Royal Stars #10 is a moving conclusion to the story. Overall, this was a fascinating and gorgeous book. The characters were all distinctive and interesting, although at times it felt like there were so many stars involved that it was a little hard to keep track of them all. And it is truly glorious to see a book where the women of a family are front and center, responsible for saving the world.

Sera and the Royal Stars #10

To meet one’s destiny is to change forever.