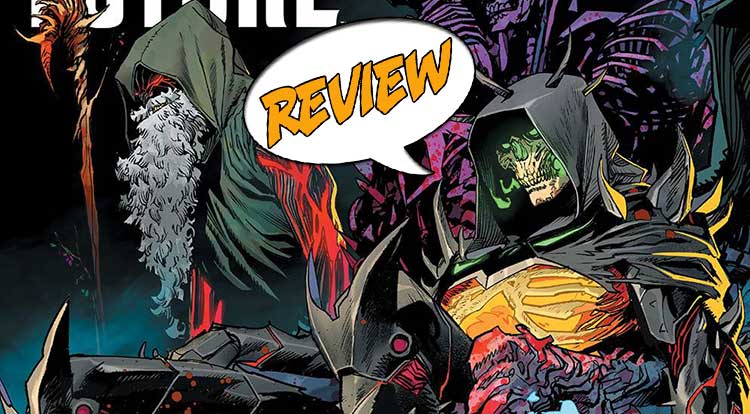 Once and Future #14 Review

The tale of the Green Knight comes into play. But who will step up to be Gawain? Find out in Once & Future #14 from BOOM! Studios.

Previously in Once & Future: After the Beowulf incident there is a bit of peace and quiet before the holidays until Bridgette is visited by magpies wreathed in magic and delivering troublesome omens. She calls Duncan, and he and Rose go to see her both because they’re dating and because he doesn’t have a car yet. Omens or not, Bridgette has come up with a couple possible loose ends to follow, either finding Galahad’s father (the “Lancelot” of the story) or tracking down the Nazis who helped Elaine raise Arthur in the first place. Rose casts her pins and finds a likely pub where indeed they find the Nazis. But on seeing Elaine’s picture, they trap the three in the pub, demand to know where their friends are, and a fight ensues.

ANOTHER STORY JOINS THE FRAY

Once & Future #14 opens as a new arrival bursts into the bar fight – a muscular knight all dressed in green. He’s already killed a man by beheading him, and demands to know who will play a game. The Nazis don’t understand who he is, but no matter how they attack him, he mows them down with ease, asking each in turn, “Who will play a game?”

Duncan knows the story of Gawain and the Green Knight, but before he can volunteer, Rose steps up. She knows the story too. She gets to take the Knight’s axe and try to strike him down. And in a year, he has his turn to do the same to her. She hits him right in the middle of the head and knocks him down. Duncan thinks he looks pretty dead, but Rose and Bridgette both know what comes next. He gets up and walks out, saying he’ll be back in a year.

Duncan is appalled, but as Rose explains, he already has two stories attached to him; who knows what a third would do? Bridgette is intrigued and wonders if she can properly fit the story. Duncan’s next reaction is to wonder why – why the Green Knight? What is he doing here now, and is this all related to Arthur?

One of the men the Knight attacked is still alive. Disemboweled and not long for the world, but still alive for a few minutes. Bridgette sits down with him. She suspects he got involved because he somehow got a story attached to him. But he recognized Elaine, and Bridgette wants to know anything he knows about her. With his last breath, he says that when talking about the dad, she mentioned something about a cauldron.

Bridgette understands what he means. She insists Rose go home to take a reading while she and Duncan go somewhere else. As it happens, the man who just died had keys and a motorcycle and Bridgette knows how to drive one. Meanwhile, Rose does her divination – with truly astonishing results.

The art of Once & Future #14 is spectacular. I cannot say that it’s all gorgeous because that would be a stretch when talking of the messy deaths at the hands of the Green Knight. But by pitting him against the Nazis who are plainly experienced fighters, seeing him take them down effortlessly is impressive. And I really like the way he looks. His skin is greenish, his armor decidedly green. He had a glow of magic swirling all about him. I particularly like the antlers on his helmet, and his grin, as though he truly does see all his destruction as the prelude to a game.

We get to see Bridgette being tough as well, and I love the contrast. She is hard as nails and utterly unflappable. Yet she is still a petite and clearly old woman. Her clothes hang loosely on her and the knuckles on her hands are prominent. (There is so much detail throughout.) She is every bit as tough as the Green Knight, but in her own inimitable way.

Once & Future #14 uses old stories in interesting ways to tell something new. I like that in this world, the immediate threats the protagonists face are clear, and they can puzzle out how to end them, yet behind the scenes there is a bigger plot that is still obfuscated.

Are Duncan, Bridgette, and Rose getting any closer to figuring out Elaine’s plot?