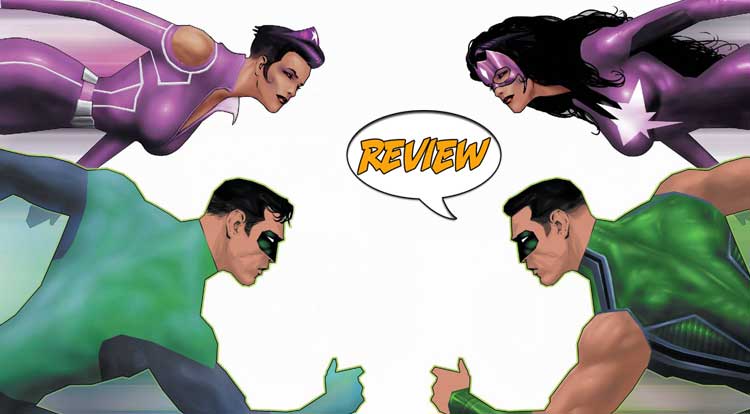 Previously in The Green Lantern Season 2:  Meet Hal Jordan’s Earth-11 counterpart in the first skirmish of the Ultrawar!  Against a backdrop of cosmic conspiracy and shady interstellar politics, two Green Lanterns and two Star Sapphires enact a four-way battle of the sexes.  As the cracks of division spread from world to world, can love prevail?

After Green Lantern brought in her husband, the alien hero known as Hyperwoman has traveled to Sector None in search of revenge, triggering something called The Ultrawar.  Elsewhere in the Multiverse, Green Lantern and Star Sapphire have been dragged to Universe-11 (where male and female genders are reversed) where a creature called Zundernell is ready to end everything.  Hal’s counterpart, the Star Sapphire of this world (aka Carol Jordan) manipulated them both, along with her Green Lantern, Hal Ferris, into saving her world, only to find that things are worse than they seem.  An army has arrived, including a Darkseid wielding various Lantern spectrum rings, the Manhunters and what seems to be an armored Richard Nixon.  Fortunately, two Sapphires provide enough power to overwhelm the creature with love, forcing it to think about what it gave up to become and alien weapon, allowing Hal to shrink it down to nothingness.  Back in their home universe, Carol has to deal with business fallout, while Hal arrives just in time to see the end of Hyperman’s trial (Hint: Hyperwoman gets the beatdown from Strong Woman and Superwoman and Hyperman goes to jail) and then…

A HEART-BREAKING MOMENT OR TWO

This issue goes from cosmic explosions to personal consequences at the drop of a hat, and the final dispensation of the Hyperfamily has been a long time coming.  Hyperboy refuses to participate in an arranged marriage and Carol turns down Hal’s proposal to run away to deep space with him, making for some heartbreak amid the Crises on Infinite Multiverses.  Morrison’s plotting is, as always, the equivalent of a wall full of newspaper clippings pinned together with red thread, and here it really works, bringing a couple of overarching plot lines to a close in time for the big conclusion of his Green Lantern run.  For my money, the best parts of this book have been the return of a couple dozen one-shot wonders to DC continuity, giving them new life and making it really feel like the entire galaxy has been having their own adventures while the humans fought among themselves.  It really gives this volume of Green Lantern a scope that feels bigger than usual (and since he’s an intergalactic police officer, that’s a tall order.)  Sharp’s art is wildly creative and colorful throughout the issue, reminding me a bit of Bill Sienkiewicz, a bit of Richard Corben and a tiny bit of classic Mad Magazine.  It’s beautiful in every single panel.

In short, The Green Lantern Season 2 #10 works on both a personal and a giant intergalactic level, giving us a fascinating look into the lives of Earth-11’s alternate heroes, bringing justice to a superhero gone bad, possibly destroying a relationship and just generally looking amazing, earning 4 out of 5 stars overall.  I’m really gonna be bummed when Morrison moves on, especially if Green Lantern goes back to the endless cycle of rainbow wars.

Universe-spanning big concepts and really unique painted art make for an issue that takes some time to process, but one I really enjoyed.