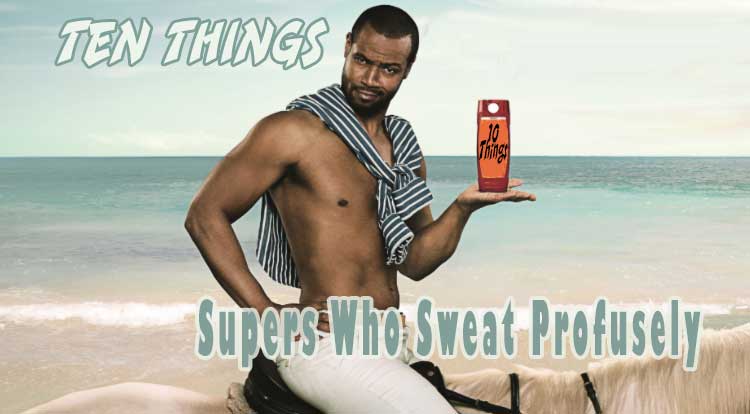 Sometimes, no matter how hard you try, you have to let ’em see you sweat. Welcome to Ten Things: Ten Supers Who Sweat Profusely!

Whooshman-Bicarbonate Films, in conjunction with An Amateur Comics Historian and A Good Strong Anti-Perspirant, Presents: Katsuki Bakugo (Kacchan to his pals) is a Class 1-A student at U.A. High School, the setting of ‘My Hero Academia.’  He’s also something of a jerk, hot-headed, short-tempered, arrogant and belligerent, but somehow manages to help drive his friends to greater achievements. His Quirk (which is to say, “super-power”) is his explosive sweat, which allows him to blow things right the hell up.  The more he sweats, the bigger the boom, and his grenade-like gauntlets serve as storage tanks for his precious nitro/perspiration. Carmilla Black (born Thasanee Rappaccini) was genetically engineered by the scientist of Advanced Idea Mechanics (AIM) to be a super-soldier.  Fully immune to nearly all toxins, Carmilla can not only discharge electrical stings, but her body stores all the absorbed poisons in a secret gland, allowing her to excrete them through her skin.  Essentially, Scorpion sweats out all her bodies toxins as a powerful “scorpion sting” that can incapacitate or even kill.

One of the demon antagonists of ‘Yu Yu Hakusho’, Bakken is a jerk, a coward, and a sadistic predator.  Able to turn his sweat into a mist-cloud that hides him, he then tricks foes into sneak attacks from inside his foul-smelling cloud.  Once he has the upper hand, he will beat his opponents mercilessly, but if he is ever bested, he will cower and beg for mercy. A factory worker for a pharmaceutical company, Jackson Day was accidentally doused in chemicals, turning his skin blue/black and allowing him to secrete a chemical through his skin that corrupts the will of anyone he touches.  His victims lose all inhibitions and morality, become selfish jerks for the duration of the effect, meaning he literally sweats eeeeevil.  Though he initially shifted back and forth from Corruptor to Day, the effects now seem to be permanent, locking him in his Corruptor state. Mike Alicar is the son of The Anarchist, a former member of X-Statix, and has inherited his father’s acidic sweat powers.  The A can not only burn through substances, he can emit blasts of acid and even create shields out of his corrosive secretions.  Mike is a part-time hero who also has a record deal, and has joined a new incarnation of X-Statix in search of fame and fortune, alongside the children and clones of his father’s teammates, as well as the surviving and/or resurrected members of the death-prone mutant squad. “Whatever knows fear burns at the Man-Thing’s touch!”  Though not always able to communicate, the creature once known as Ted Sallis is empathic, and will respond with instinctive rage to the emotion of fear, secreting a corrosive substance from its planet/human hybrid body.  The Guardian of the Nexus of All Realities, Man-Thing serves a cosmic function that makes him important throughout the multiverse, and occasionally allows him to serve as “transportation” for The Thunderbolts, The Howling Commandos and The Avengers of the Supernatural. Given super-powers by the mysterious White Event, Merriam Sorenson enrolled as a patient in the Clinic for Paranormal Research, eventually developing a crush on David Landers, a member of the group known as D.P 7.  She was drafted into the CIA as part of an all-female commando team, using her power to absorb moisture then expel it through her skin.  Merriam’s weight fluctuated depending on how much liquid she had absorbed, and she eventually chose to have her powers removed by a paranormal called The Cure, after Landers broke her heart for the last time. A mutant born with a body resembling his namesake primate, Jerome Beechman was ostracized by other kids and eventually abandoned by his parents in the desert.  Fortunately, he discovered his ability to secrete a pheromonic substance that can control the minds of human woman, allowing him to surround himself with an army of “friends” and worshippers.  Add in the fact that he’s a misogynistic abuser, and you’ve got a recipe for disaster. A scientist from Blüdhaven, Andrew Franklin was caught in the explosive blast caused by Chemo, gaining the power to cause explosions through his unique physiology.  It’s not only his sweat that will go BOOM!, though, as The Human Bomb’s hair, blood and even his fingernail clippings are pyroclastic, and he is forced to take special medication regularly to keep himself from going nuclear.  After the Flashpoint Paradox altered the timeline, Andrew seems to have been replaced by Michale Taylor, a different Human Bomb. One of a number of children who gained super-human abilities after injections of nanotechnology as an infant, Valerie Sharp grew to be an angry young woman with neglectful parents.  Able to shoot high-pressure blasts of “steam plasma” through her skin, Val eventually ran away from home and joined the unofficial grouping of Ultras known as The Freex.  Though she gained some control over her powers, Valerie could still lose control of her “sweat” when angered, causing her to fire super-heated steam like a sixteen-year-old grunge Popeye.

Thanks to Faithful Spoilerite J. Michael T (@J_Michael_T) for this week’s topic, Ten Supers Who Sweat Profusely.  Feel free to follow along @MightyKingCobra for more Ten Things madness on Twitter or check out the full Twitter archive here!  As with any set of like items, these aren’t meant to be hard and fast or absolutely complete, but I kind of hope this one is, because… EW.  Either way, the comments section is below for just such an emergency, but, as always: Please, no wagering!