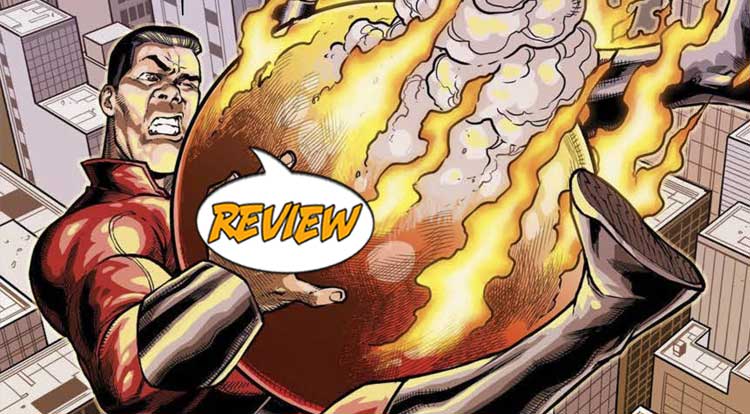 What if you created an android duplicate who was a better you than you ever were?  Your Major Spoilers review of Penultiman #3 from AHOY Comics awaits!

Previously in Penultiman:  Penultiman seeks a way out of his emotional spiral by reading a self-help book about positivity, then starts acting like a jerk in public.  His android understudy, Antepenultiman, ruins Penultiman’s secret identity.

We open in an unnamed city, as people begin transforming into humanoid dinosaurs, for reasons unknown.  Thankfully, the hero called Penultiman arrives to save the day, trapping the lizard-people and tracking down the source of their transformations.  He effortlessly takes down the villain involved, even as he gloats about how powerful P-Ray energies being the hero’s weakness.  When he asks how his devices had no effect, the hero reveals the truth: He’s not actually Penultiman at all.  Cut back to the real hero, who is appalled at his android duplicate, Antipenultiman, for giving up the truth.  Penultiman is horrified that his artificial duplicate is better at being a hero than he is, but even worse, is better at his secret identity as well.  When Antipenultiman is busy with work friends, the hero sets out to try and do his own job, only for his focus on positivity to go terribly wrong.

The real difficulty in doing a comedic superhero story is in dealing with the over-the-top nature of both comedic and superhero stories, but Peyer and Loughridge strike a perfect balance.  Penultiman’s pained fake smile as he tries to stay positive is wonderful, and the public’s response to him telling a badly injured man to “stay positive” is perfectly understandable.  The entire issue manages to balance the absurdity of the situation with the real emotions of self-doubt, using the silly idea of “Superman Robots” to tell a modern tale about imposter syndrome and loss of confidence.  As the story ends, Antipenultiman is ready to order his creator to stay inside and let him handle “their” life all by himself, with the final panel making me snort out loud.  There’s also a trio of prose stories, one of which is quite funny, even if I’m worried that the writer’s name is an inappropriate reference.

In short, Penultiman #3 pulls off the tough task of giving us a Superman-style powerful character and giving him perfectly human foibles and weaknesses, balancing pathos, comedy and superhero antics into a fun, unique-ish issue of comics, earning 3.5 out of 5 stars overall.  With next issue promising us that the android duplicate is building his own android duplicate, I think this book may be officially on my pull list going forward.

Peyer delivers an entertaining story (as do the writers of the back-up text stories) and the art is a perfect balance of traditional superhero art and slightly wacky comedic funnybooks. Nicely done.