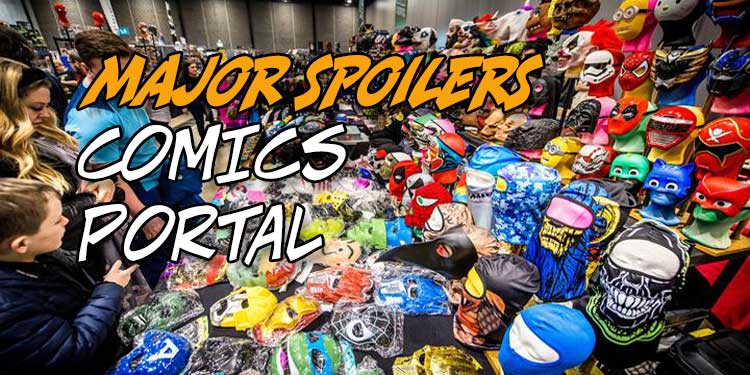 This past weekend, I noticed something that encouraged me when it comes to comic conventions returning in 2021. There have been several smaller cons and signings happening in the Central Florida area where I live over the past few months. We do have warmer weather here, but regarding the pandemic, we’re not out of the woods yet.

What encouraged me was that there were two—count ’em, two—sizable conventions that were held over the weekend. Granted, they weren’t on Megacon’s level, but they are two of the ones that are usually pretty successful.

The first I’ll talk about (alphabetically, of course) was Infinity Toy and Comic Con (called the Infinity Toy & Holiday Convention this time), and it was held on Saturday, December 12, in its usual venue at the Osceola Heritage Park in Kissimmee.

The second was the Spooky Empire Pop Up Event that was conducted on Saturday, December 12, and Sunday, December 13, at the Wyndham Orlando, it’s usual haunting grounds.

Sadly, I had other obligations that kept me from them, but I did get to talk with several people who were there as vendors and/or attendees.

This con is the closest “bigger” convention to where I live, and I often go there with friends who make money because we can sleep at home instead of at a hotel. It’s been happening for several years now, and it’s a favorite of mine. While it has usually been a 2-day con, this time it was only on Saturday.

There were several vendors (including creator Jonathan Hedrick of Capable and Freakshow fame) selling their wares as well, and the con held their usual costume contest, which was won by the Grinch wearing a Darth Vader outfit (see above).

While this con bills itself as “Florida’s Premiere Horror Convention” (and often takes place around Halloween), it’s also a “bigger” convention that is pretty popular in this area. As per usual, it was a 2-day event.

Guests this time included Alex Vincent, Dave Sheridan, Joe Bob Briggs, and Ricou Browning. They limited the number of tickets available for purchase, but the Saturday one-day passes and the weekend two-day passes sold out. In fact, you had to buy tickets online since no tickets were sold at the convention itself.

They didn’t have a costume contest during the event, but they had recently held an online version on Halloween.

There were also vendors at this con, and that included Matt Knowles from Insymmetry Creations, LLC, creator of Heirs of Isildur and Tales from Nocturnia.

HOW DID THINGS GO?

According to the folks I spoke with, it seemed that both events had similar turnouts and results. There was a good number of people there as far as attendance, but vendors did only “pretty well,” as I was told. That usually means they did okay, but they would have liked to have made more, in vendor parlay. Of course, the fact that these happened on the same weekend may have split the audience, unfortunately.

I imagine it will take some time for fans to feel secure when it comes to venturing out to conventions again. I did find out, though, that masks and social distancing were the order of the day, with all (or very nearly all) of the people at them following those rules.

It also may be that folks have been buying their holiday presents online rather than going out to shop. However, I had to run into a local Target over the weekend, and they had so many people shopping there that they had to re-institute a line at the entrance. I haven’t seen that in a while here! I’ve been looking online for lists of cons already scheduled for the new year, and it seems like the organizations running conventions are largely expecting things to pick up again around the spring or summer.

That may be a wise thing since it may still take some time for the pandemic’s grip to loosen up. Also, the public may begin to feel more confident in venturing out to larger gatherings by then. We’ll see.

I know a lot of creators, vendors, and fans who are literally chomping at the bit for conventions to get back into high gear soon. Being isolated from others in the genre community has been tough on many of us. I often see friends online who are very anxious to return to interacting with people who share their interests in person. I can relate to that!

It remains to be seen, however, whether conventions will ever truly bounce back to their former glory. A lot of that will depend on how safe everyone feels when it comes to venturing out into public gatherings. All I can recommend is that we all keep tuned to how our local governments are handling things and how things move forward in the months ahead.

Personally, I can’t wait for cons to get back to business! I miss discovering new Indie comics at conventions! I also miss meeting people I’ve talked with online, putting faces to their voices! Doing that is not worth putting them and myself into danger, though! Here’s hoping it will all resolve safely and soon!

What do you think? Will conventions return to the way they were happening before the pandemic? What will it take for you to feel safe enough to go to a con again? Whatever your opinion, feel free to share it in the space below!