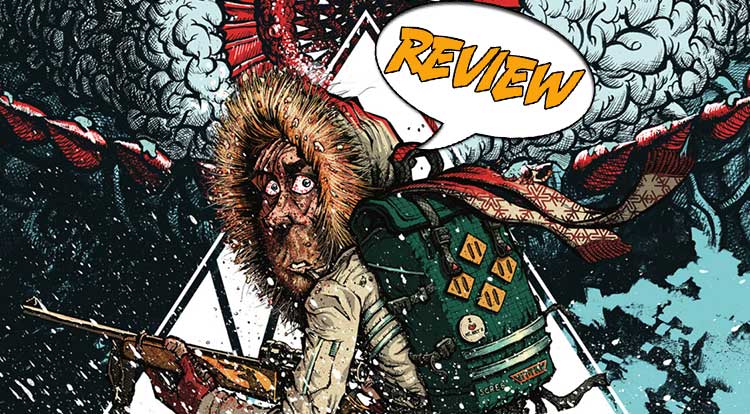 In Mountainhead #5 the eye of terror has fallen on the town of Braeriach, and everyone is doomed!  Except those survivors trekking up Mount Rector, armed to the teeth with dynamite, on a monster hunt to end all monster hunts.  Does evil win?  Find out in your next mighty Major Spoilers review!

Previously in Mountainhead #5:  Abraham and his father Noah roam North America, keeping ahead of forces only Noah can see and understand.  But when they arrive at the town of Braeriach, and the foreboding Mount Rector, will the evil they have fled from all their lives arrive with a devastating and lethal power…

Mountainhead #5 comes out the gate like a wrecking ball, and never lets up until the explosive ending.  In between, readers will experience the sort of body horror rarely seen in comics, with an interesting family dynamic.

Abraham’s father has dragged him around North America ever since he was a child, escaping forces of darkness only he can see.  They then wash up in the mountain town of Braeriach, where the evil Noah has sought to escape finally trap them.  Along the way, Abraham discovers Lauren, the mother he never knew, and a town full of people willing to help.

I greatly enjoyed Mountainhead #5, mainly for the wonderfully gory and organic horror visuals.  But there’s also a neat tale of redemption tucked away inside, as Abraham’s mother comes through for her son.  The issue is also a paean to never giving up, even in the teeth of impossible odds and of the value of community in bringing meaning to the lives of people who have cut themselves from society.

The real buzz from Mountainhead #5 is the artwork of Ryan Lee, and the stellar coloring of Bobby Curnow.  Lee puts an exaggerated twist on the characters he’s drawing, bringing a slight feeling of caricature to them that helps demonstrate the conflicted emotions each feel to the fullest.  He goes full Lovecraft and The Thing with the body horror elements, as the evil that has been stalking them absorbs the dead flesh of the people of Braeriach.  The result is a multi limbed and tentacled monstrosity animated by a sinister, abiding evil that delights in the terror it causes, determined to spread its ghastly influence across the world.

Overall, Mountainhead #5 is an entertaining issue.  The character’s reactions to the insanity around them is believable.  The realization of this world by the artistic team is convincing and disgusting, in equal measure.  Lee wraps it all up in a storyline about the strength of coming together to fight a common enemy, and the power of redemption even in the darkest of moments.  There is one jarring moment with the death of a major character seemingly coming out of nowhere, just at the moment he realizes his connection with his community.  But that only serves to underscore the tenuous nature of existence on the mountain, and further reinforces the need for the survivors to bond together to face their common, monstrous enemy.

Mountainhead #5 is an entertaining example of psychological and physical horror, wrapped up in a tale of family drama and redemption. Fans of David Cronenberg and The Thing will get a kick out of the artwork and story in Mountainhead #5.

Not everyone gets what they deserve in this wrap issue of what has been an entertaining series that managed to ride out the distribution issues caused by the pandemic. The creative team’s belief in the series is shown in their determination to get the final issues out into the world. Seeking out the series will be well worth your time.