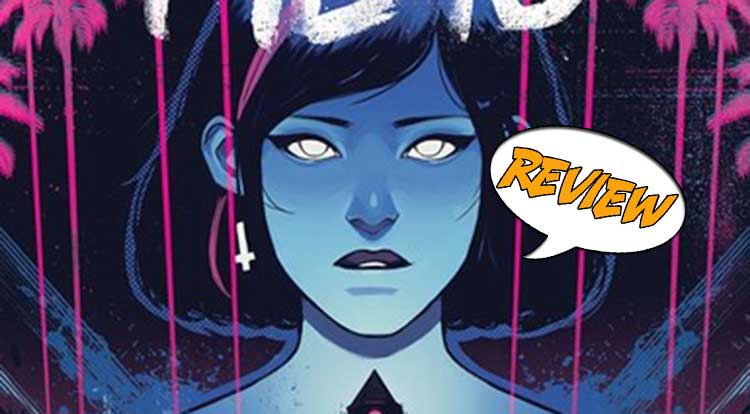 Ami thinks having a show in a haunted house is killer idea. But what happens to her when she explores the Old James House that fateful night? Find out in Home Sick Pilots #1 from Image Comics!

Previously in Home Sick Pilots: When a high school punk rock band goes to a concert, and when someone talks about his weird experience with someone who was caught in a haunted house AND DIED, no one quite expects where this will take them.

Home Sick Pilots #1 takes place in California in 1994. As it opens, we really don’t know what’s going on. There is a narrator, someone who cannot move and cannot even hear themself scream. But what we see is a dilapidated old house glowing with light. As the narrator tries to move, the house changes shape to become humanoid, like a golem formed out of architectural features. Inside it is a young woman now wishing she had not gone to see a certain band. It’s a strange, but dramatic, way to open.

The rest of the book shows us how we got to this point. It all started when a group called the Nuclear Bastards were playing. The young woman from the house, Ami, is there in the audience with her band members Buzz and Rip. They want to pull off a cooler show, and Ami suggests the house “that kills people” – the Old James House, believed to be haunted, although she doesn’t really believe it. Before this goes any further, the cops show up and the big excitement of the night is seeing if they can get away.

After they regroup, Ami talks to Rip who know a kid who lived where he does now, perhaps a foster kid. He was an occasional runaway who vanished, but when he showed up this time, he had broken into the Old James House and said it had kept him. He died of starvation. Ami’s band (Home Sick Pilots) has a run-in with the Nuclear Bastards, and it is revealed that there are rumors about Ami killing her mother. She too is in foster care. She doesn’t feel like she fits in. Later, Ami goes to the Old James House and, when the door creaks open at her touch, goes inside.

The next day, Buzz and Rip go to the house and see Ami’s skateboard. The door does not swing open for them. They climb to an upper floor and slip in through a window. They don’t realize that the Nuclear Bastards are here too, breaking in through a different window. Some tough talk occurs, and a casual drug deal between rival band members turns into an attempted robbery. A knife is drawn and there is a moment of shock and then all the plumbing in the area bursts out of the walls and decapitates the lead of the Nuclear Bastards.

The story goes full-blown haunted house weirdness for the next few pages, followed by a calm page explaining that haunted houses work like magic circles, in that the horrible things they contain remain within them. At least they do unless they are somehow stolen.

Home Sick Pilots #1 makes interesting use of color palettes. Most of the action takes place at night or inside the haunted house which is like the next best thing to night. The colors overall are muted and lean heavily into cool tones. The main accent color, and one we come to associate with Ami, is bright magenta. I like the use of color theory with this different saturation of colors to add to the overall mood.

The art is terrific. I like the way the characters are portrayed. I like the fact that there are a couple breaks where Ami narrates her thoughts against a mostly black page. The way the lettering is set out is visually poetic. The space allowed to her thoughts gives them weight. And the page has hints of light around the edges, like when you’re in the dark and you think you see a glimpse of light, perhaps reflected by something.

As a twist on the typical haunted house story, Home Sick Pilots #1 is a fresh and solid read. It is well-crafted, dark, and intriguing.

Will the house “that kills people” live up to its reputation?