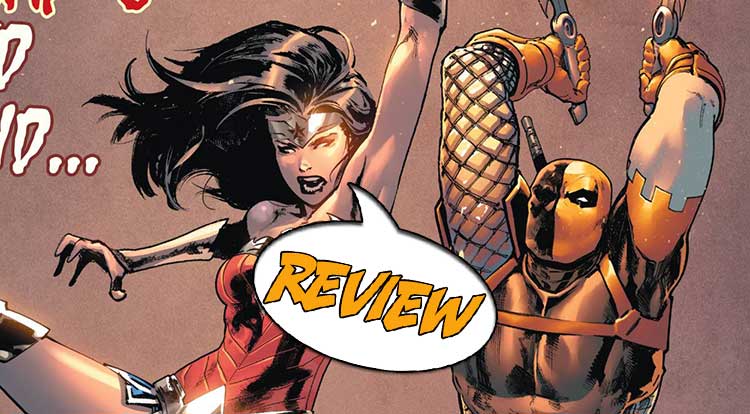 The apple doesn’t fall far from the tree as Liar Liar begins her crusade to bring down the evil Wonder Woman.  Your review of Wonder Woman #768 from DC Comics, awaits!

Previously in Wonder Woman: When the newly incarcerated Maxwell Lord turns up mortally wounded in his prison cell, Wonder Woman and Etta Candy are on the case to track the would-be killer.

Wonder Woman #768 opens with Diana and Etta investigating the scene where Maxwell Lord was attacked and stabbed. A message written on the wall leads Wonder Woman to believe that Maxwell’s daughter Emma has something to do with it.  Etta goes to pull all the files she can on Emma.  She finds that Emma has been in a facility being given experimental drugs to control something.  Elsewhere, we see Emma escape the hospital she’s been at with the help of her pet bunny talking to her.  Back with Etta and Wonder Woman, their investigation is interrupted by Deathstroke who’s been hired to take out anyone trying to access the files Etta and Diana are reading.  Wonder Woman fights him off and eventually appeals to the soft spot he has for children and he backs off.  Etta and Diana then set out enact a plan to lure Emma Lord aka Liar Liar out,

Wonder Woman #768 has a lot of things going for it and one really annoying thing going against it. This issue continues Mariko Tamaki’s run of issues that feature Wonder Woman handling a situation in a way that doesn’t involve her punching her way through someone and with a villain like Liar Liar, a teenager with mental health problems, I don’t expect this streak to end anytime soon, which isn’t a bad thing. Having Diana manage to talk a hired gun like Slade WIlson down is as close to a “hell yeah!” moment that negotiations will ever get.  Unfortunately this scene also is the one thing that this issue has going against it.  Deathstroke is in this issue, just for the sake of having Deathstroke in this issue. He doesn’t add anything other than being a fairly unobtrusive obstacle to eat up a couple of pages. His role could’ve been filled by really any villain that does stuff for money, or honestly, just a faceless goon in a balaclava.  But I guess it lets them put Slade on the cover. Other than that, this issue is just fine and in fact I’m interested in where they might be going with Liar Liar’s distorted version of reality completely overtaking her perception.

THE BOTTOM LINE:  NOT BAD, EVEN WITH DEATHSTROKE

Liar Liar is a foil that deserves some more attention and seems like a perfect fit with the direction that Wonder Woman has been going for awhile now. Also, they’ve already utilized the Alice in Wonderland/Camelot motif well.  This issue suffers though from some unnecessary characters thrown in just to add a hint of action and fill some pages.  3.5 out of 5 stars

Wonder Woman #768 is another chapter in a good run for Wonder Woman. Unfortunately the inclusion of Deathstroke doesn’t do much for this issue other than show how light it is on plot, even though what is there is interesting.