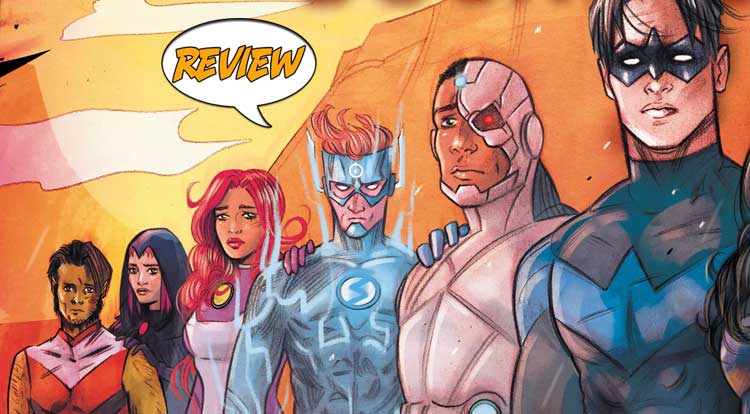 What would you do before the end of all the worlds?  Your Major Spoilers review of Dark Nights: Death Metal: The Last Stories of the DC Universe from DC Comics awaits!

Previously in Dark Nights: Death Metal: The Last Stories of the DC Universe: The last battle against the Batman Who Laughs is at hand…the final fight for everything in the universe.  And while the night is usually darkest just before the dawn, what would be the last thing you’d do if you weren’t sure the dawn would ever arrive?  Join our heroes in their waning hours as we show their journeys through what could be their final moments… heroes that have fought a million times before, but are keenly aware this could be their endgame.  These are the stolen moments detailing the last stories of the DC Universe.

THE RETURN OF THE 80-PAGE GIANT

On the shores of what was once Themyscira, Donna Troy worries about what happens next, as the heroes of the multiverse prepare for their final fight.  Beast Boy arrives to provide a little bit of levity, only to reveal that other Titans have all assembled together, from all different eras, all worried about the end of the world.  It’s a nearly complete roster of living Titans… and then, Wally West arrives.  In Coast City, Green Lantern Hal Jordan is visiting his father’s gravesite when his old mentor/worst enemy Sinestro arrives.  Their moment is awkward, as Sinestro seems to be trying to ask for a favor, but is too proud to say it, and Hal isn’t quite willing to overcome his resentments, but eventually they make peace, and Sinestro returns to the Green Lantern Corps for one last fight.  Wonder Woman prepares for combat, rallying her Amazons to her side and meeting an alternate Donna Troy, while Green Arrow and Black Canary have the most wonderful “date” on the beaches of the Hellscape, ending with Oliver deciding NOT to propose, after meeting an alternate universe hero who could have been their daughter.  Aquaman spends some time alone before reuniting with his family, as do Batman and Superman, and the issue ends with Donna Troy and Wally West coming face to face after his murderous rampage in ‘Heroes In Crisis’ leading to…

…a hug.  It’s a lovely ending to a lovely issue, one that surprised me in how effective it was.  Maybe it’s the fact that it feels like a love letter to previous iterations of continuity that haven’t been in vogue lately, or maybe it’s the issue’s focus on emotional beats rather than the giant crossover explosions of the main title, but this book really worked for me.  Even Batman got a lovely sweet moment, “marrying” Nightwing and Batgirl “by the power vested in my by nobody”, and aside from a couple of tiny quibbles (like multiple versions of the same character in play and not knowing whether these are the current versions of major characters) this issue is pretty perfect.  Even with the high price point, it’s four issues worth of comics for the price of two-and-a-half, featuring creators like Gail Simone, Mariko Tamiki and Mark Waid really pulling out the stops.  The art is excellent throughout, as well, with special kudos going to Travis Moore’s final page splash of dozens of Titans in action and Meghan Hetrick’s wonderfully emotional work on Green Arrow & Black Canary’s chapter.  Heck, it even made me remember what there is to like about Hal Jordan, and that’s some heavy lifting after the last few years of comics.

BOTTOM LINE: NOT A CLINKER IN THE BUNCH

In short, Dark Nights: Death Metal: The Last Stories of the DC Universe has a few too many colons in the title, but is otherwise a really impressive issue of comics and the best thing to come out of the Dark Nights or Death Metal titles to date, and will be accessible to new fans and old, reminding us of the core of our favorite heroes and reigniting a couple of romances along the way, for 4.5 out of 5 stars overall.  If you only by one Dark Nights book, this should be the one.

Normally, I'd grouse about paying nine dollars, but this book is worth every cent.