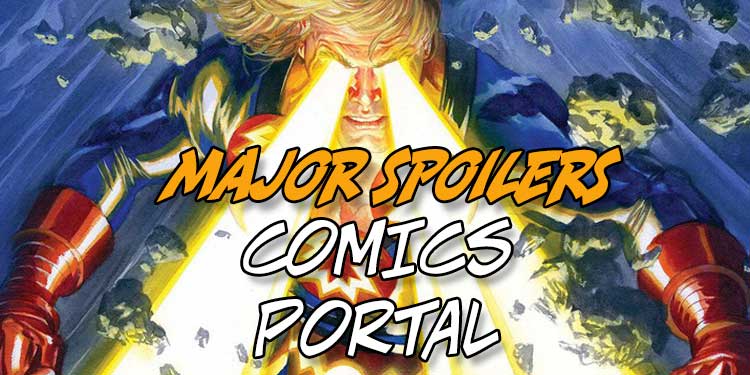 Marvel is pulling out all the stops for the return of Jack Kirby’s Eternals!

HERE’S WHAT WE KNOW Arriving in local shops on January 6 will be Eternals #1, and it will feature the team of writer Kieron Gillen and artist Esad Ribic. At last count, the book will have 37 different covers (not including variants arranged by LCS’s), so you might want to be ready to spend a lot of money on this book if you like to collect #1’s. At the moment, this will be followed up in November by a live-action Eternals movie in the MCU.

Gillen is probably best known right now for Once and Future from BOOM! Studios, a modern update to the Arthurian legends in England.

So, just who are the Eternals? According to an article on Marvel.com, they include “Ikaris, Ajak, Sersi, Domo, Makkari, Thena, Zuras, and more.” The author goes on to say that “the book made the most of an era of exploration and invention in the ’70s, forging a new history and mythology for the Marvel Universe, one that would be further woven into the fabric of the mighty Multiverse as years passed and other creators continued to expand upon its ultra-rich concepts.”

Kirby’s art was the foundation for the series, with “weird, wonderful, somehow both ancient and futuristic, the artifacts and locations that these new characters encountered were the work of an artist at his peak,” the article says.

The very first page in that first issue featured this explanation: “Is man alone in the universe? Every myth and legend to emerge from the distant past points to a strange visitation from the stars!! Beings of great power have been on this Earth–and then departed! Who were they? What did they do here? Where have they gone? These awesome questions create the background for this exciting new saga of a day which lies ahead… the day of answers… THE DAY OF THE GODS.”

WHAT WE CAN EXPECT I’ve been reading several interviews given by Gillen, and I’ve come across several things we can expect to see in Eternals.

First up is the fact that this is not a team but a society, so the dynamic will be different from most other groups.

Several of the aforementioned Eternals will be appearing in the new book, including Ikarus, Sersi, Zuras, and Thena. There will be also be Druig and Sprite, just to name a couple more. I’m sure we’ll encounter many more as the issues are released. And just because someone has died, that doesn’t mean they won’t be back! They are “eternals,” after all!

If you’ve grown attached to certain characters appearing in certain bodies, get ready for changes. Gillen has said that we should expect gender and body switching, among other things. Since they’ve been around for years and years, we can expect them to look at things very differently than most mortals.

We should also find a lot of different perspectives among the Eternals themselves. Some are interested in ruling the Earth while others want to protect humanity. They won’t necessarily all get along as a result. I am a long-time Kirby fan. His art and concepts were some of the most creative EVER in comics, in my opinion. I always liked this group when he was creating their stories for the House of Ideas (Yes, I’m that old!), and I’m curious to see what Gillen and company have in mind for them.

The way that Eternals look at life will be interesting to explore. Also, how they view the universe should be fascinating as well. Instead of having a limited view of things, they should have a longer perspective when it comes to sorting out what’s important and what isn’t.

Kirby never shied away from the concept of “gods.” He added Darkseid to DC, and he has become one of the most legendary baddies in that universe. Many of Kirby’s Marvel creations still have comic life in them, including Doctor Doom, the FF, and many more still selling books today. To revisit this group of “gods” will be something I want to read.

Ikarus is clearly the most recognizable of the bunch although he has not been the one in charge. He’s called a “straight-talker” and someone who doesn’t mind getting his hands dirty. I have always liked him best. I brought up early on in this column the fact that Marvel is really going to town when it comes to covers for Eternals #1. I’m sure this will “collect” a lot of money from the people who want and need each debut issue from the House of Ideas. To the rest of us, though, this can be pretty daunting. How many covers people actually buy will be something I’ll be watching for.

For me, the story and art will matter much more. Given Gillen’s work on Once and Future, I’m sure he can deal with (and expand) the mythology Kirby laid out in the past. Of course, the pressure is on given the fact that this will likely be viewed as a set-up for the motion picture. It should help build up interest in the film and maybe even help the MCU when more movies begin to come out. We’ll see.

One thing that concerns me is that Marvel fans tend to like “average joe” level heroes. You know, Peter Parker has to hide from his landlord because he can’t pay the rent. Sue Richards has a bad hair day. Things like that. In my opinion, Thor has struggled because he’s a god, and by that I mean, he’s less relatable than Spider-Man. How the Eternals will appeal to fans of the House of Ideas will be another thing I’ll be paying attention to. See, I LIKE “iconic” characters, so I’m all in!

I haven’t been buying many Marvel titles lately, so I’m hoping this one will be a big hit with me and others! I don’t mind giving the House of Ideas more money if I enjoy the stories they tell!

What do you think? Are you interested in the Eternals? Do you already have a favorite of the gods? If so, which one? Whatever your opinions, feel free to share them below!