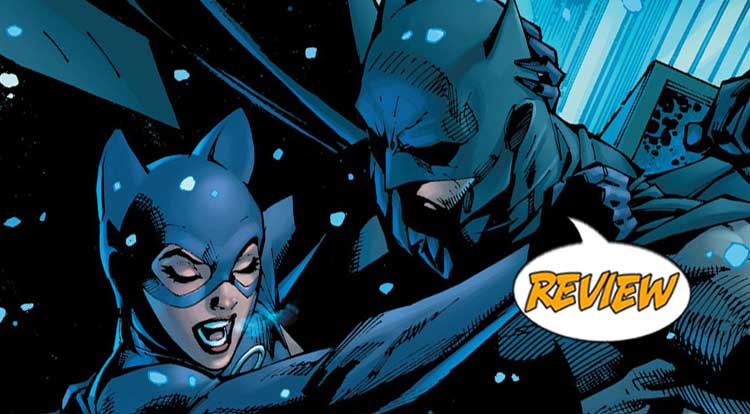 Bruce and Selina, past, present… and future?  Your Major Spoilers review of Batman/Catwoman #1 from DC Comics awaits!

Previously in Batman/Catwoman: A tale of three timelines, examining the relationship of Batman and Catwoman in their past, their present and their future.  What does the failed wedding herald?  Will they get their happy-ever-after?  Or are our heroes forever doomed to lonely nights in the alleyways of Gotham?

We open with a really lovely take on the movie crane shot, as an elderly Selina Kyle drives across a bridge with Christmas carols playing from her stylish convertible.  In the present, Bruce Wayne is meeting with Andrea Beaumont, for reasons unknown, cutting to Batman and Catwoman in action, which I think is in the past?  There’s a bit of interaction with The Sewer King, cutting to Catoman sparring with The Joker about her relationship with Batman, cutting to Future Selina breaking the news to an unidentified man that Bruce Wayne has died.  Batman finds Andrea’s missing son, which explains why she visits Bruce, while Andrea breaks into a mausoleum to retrieve the costume of the Phantasm.  As the issue ends, future Selina has apparently killed The Joker, I still don’t know which timeframe is the present and Andrea sits silently on her bed, staring emptily into the distance as the Christmas carols come back around.

Even after multiple readings, this issue is quite confusing to me, as it takes place after the death of Alfred and the wrecked wedding, but doesn’t use current designs for Batman and Catwoman, removing one of the primary visual cues of what happens when.  I really like Clay Mann’s work, especially his elderly Selina, but more than once his facial expressions are completely blank, making it unclear what the characters are supposed to be feeling, and no matter how good the art is, it can’t overcome the difficulty in following the story.  The introduction of The Phantasm costume is also confusing, as it feels like I’m supposed to understand her place in the continuity without the issue actually showing it.  The ‘Mask of the Phantasm’ movie is nearly thirty years old (and part of a continuity that can’t be easily applied to modern Batman), but seems to be required viewing for this story to really land.

Though I’m not a regular reader of the regular Batman title, but I did enjoy parts of Tom King’s recently-ended regular run, making this issue feel even more disappointing for me.  Batman/Catwoman #1 is a visually stunning issue, with a couple of moments that feel movie-poster attractive, but a back-and-forth-in-time structural conceit that doesn’t ever come together, making for a very confusing story, even after multiple reads, earning 3 out of 5 stars overall.  I would be interested in reading the complete story once it’s collected, but I don’t think I’ll be coming back for individual issues based on how fragmented this one feels.

The structure of this issue is almost incomprehensible, and after multiple readings, I'm still unclear as to what happened when. That said, it's a really good looking comic book that makes me think I don't need to read the rest of the series.