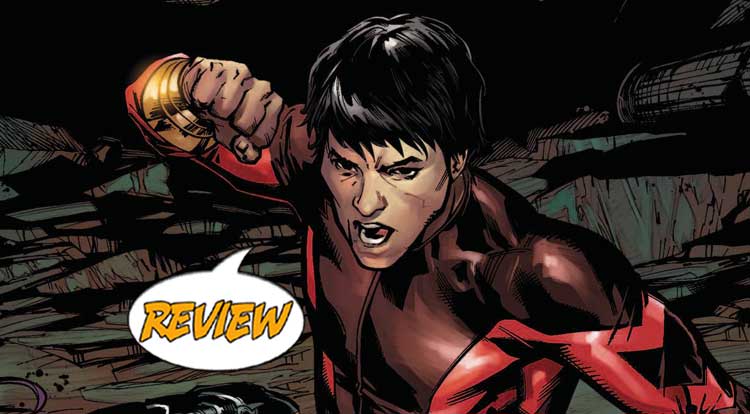 Previously in Atlantis Attacks: Who will wear the crown? Whose word and heart will break? The fate of Atlas and the world hangs in the balance!

As our story opens, Mike Nguyen, the founder of the trans-dimensional city of Pan, has forced Amadeus Cho into full Hulk mode, and is controlling the would-be leader of the Agents of Atlas to put an end to Namor’s threat to the surface world.  In the ocean, Aero and Wave successfully negotiate peace between the Sirenas and the Atlanteans, but their fragile moment of peace is shattered by a rampaging Hulk.  Shang-Chi and the rest of the team, along with Namor and Namora, go head-to-head with Amadeus, but are hard-pressed to take on a Hulk.  Sword-Master is nearly killed before Shang-Chi manages to free Amadeus, but the tsunami created by their clash threatens to destroy Pan.  Amadeus hulks out again to stop the tidal wave, but Nguyen is caught in the flood and dies.  Cut to one month later, as Pan is recognized as a sovereign nation for the first time, as Amadeus refuses to be manipulated by Jimmy Woo any longer, stepping away from the Agents of Atlas to find his own path.

CONTINUING THE SAGA OF PAN

I really like both Agents of Atlas teams, and both of them are in these pages, and I also like how this is a continuation of the previous Agents of Atlas minis in previous crossovers. In fact, this issue ends with a tease of the Agents and Namor facing the ‘King In Black’ crossover, which makes me wonder why they don’t just give Pak a monthly Agents of Atlas series already. The cast is great, including Silk, the new Giant-Man, Shang-Chi and a ton of new heroes from across Asia, and even without Brawn/Hulk/Amadeus, they’re incredibly powerful.  The art is quite good as well, and it’s hard to tell where the two credited artists stop and start, which makes for a smooth visual read throughout the issue.  Perhaps my biggest complaint is that it feels like a waypoint between crossovers, which means that I have to come back for the Venom-universe stuff if I want to follow this creative team and these heroes.

In short, Atlantis Attacks #5 is a complex read with a lot of characters and moving parts (perhaps a few too many) and a nice art job throughout, featuring a roster of characters who deserve more screen time at Marvel, shaking out to a well above-average 3.5 out of 5 stars overall.  If nothing else, it reminds us that super-heroes exist outside New York City and that just because these characters aren’t at the forefront of the X-Men or Avengers doesn’t mean that they aren’t equally heroic and impressive.

Plus, it has Gorilla-Man!

Out of one universal crossover into another, but Pak writing either Agents of Atlas team is worth the price of admission, and this issue looks really good.