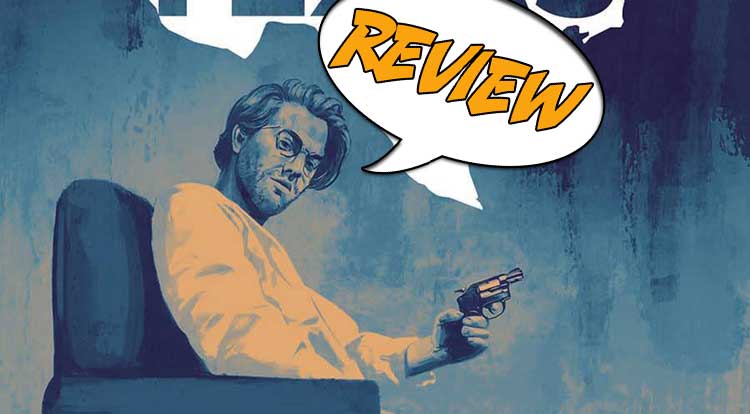 In That Texas Blood #6 from Image Comics, Randy decides to take matters into his own hands as he ignores the pleas of his lover, Sara.  Meanwhile, Sheriff Joe Bob knows who the killer of Randy’s brother is, but before the night is out, the bodies will pile up.  Who dies?  Find out in your next mighty Major Spoilers review! Previously in That Texas Blood: The murder of his brother has drawn Randy back to his hometown, the town he fled from when he was younger.  There, he discovers that his memories are as toxic as some of the people, and finds himself ensnared by his own demons.  Meanwhile, Sheriff Joe Bob tries to keep the peace, but with one thing leading to another, the only way the slate can be cleaned is when blood calls for blood…

THEY GOT WHAT WAS COMING

What drives a man to kill?  Rage, revenge, or just plain cold hate?  Randy Terrill is about to find out, in the most horrible way imaginable.

That Texas Blood #6 has the feel of a 90s movie, The Last Seduction, where the female lead blows into town and proceeds to ruin the lives of all the men around her.  She’s motivated by greed and an amoral attitude to the world.  Randy is a little like her, thought his motivations are more deeply felt – alienation from his hometown and family, and a burning need to find some meaning in a life that feels increasingly shallow and empty.

That Texas Blood has ostensibly been about Randy’s search for the killer of his brother, a local ne’er do well with a bad reputation.  No one really mourns his death, in fact, his girlfriend, Sara, quickly falls into Randy’s arms.  What Randy is really searching for is himself.  He fled the town to escape and has spent the intervening years – first college, then a respectable job and relationship – putting as much distance between himself and his past.

But blood calls for blood, and if the tides of memory threaten to drag Randy under, well, so be it.

That Texas Blood #6 has a sting in the tail that will leave the dedicated reader of this series reeling.  What actually is going on is all there, but despite all of Randy’s efforts, the truth is always elusive, until it is too late for him to stop.  The writing, as you can no doubt sense, by Chris Condon, is absolutely first rate.  Not one word is wasted.  The dialog he gives to each of the characters, even the smaller supporting roles, tells you something about the people who speak it.  There’s the constant threat of violence always bubbling away under the surface, and even worse, there’s the sense that Randy, despite all his efforts to find himself, will be just as content if he can forget everything about himself.

Jacob Phillips artwork, his composition of scenes, his realisation of the characters, is top notch.  The emptiness of Randy’s face in the back seat of the police car near the end of the issue tells you everything you need to know about the effect his actions in the bar have had on him.  The tableaux in that bar (ironically and deliberately named The Lost Soul), the framing of the image in the key panel, with the bloodied corpses lying just so – demonstrates a mastery of his craft that we should all be thankful to have experienced.

That Texas Blood #6 is an ugly read.  It takes a dark, nihilistic view of humanity, that we are slaves to our emotions and history, that we cannot rise above what threatens to drag us down, and that in the end, sometimes the only thing you can do is pull the trigger and invite the darkness in.  Randy Terrill, for all his efforts to escape his past, to drown it in his college degree, and his respectability in the big city, was only ever a few steps away from the gaping maw of his past.  And maybe, just maybe…you are to.

That Texas Blood #6 grips you like a vice from the first page and only leaves you long after you’ve turned the final page.  The sheer waste of what happens is breathtaking, and a testament to the fine storytelling by both creators.  Happily, there is the promise of more adventures set in this milieu, so we can only sit back and expect more personal destruction in the issues to come.

A knife sharp examination of human frailty and failings, That Texas Blood #6 comes out swinging and never lets up. These two creators are really in sync by the final issue, and have created a parade of memorable characters in an iconic setting. A must buy for all lovers of noir.