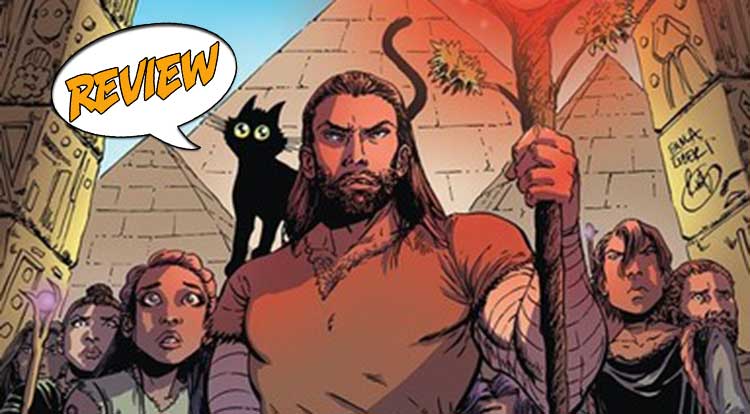 In ancient Egypt, the Seeker’s brother Xenthos challenges the sphinx. Could there be any link to the mysterious demon cat the Seeker accidentally summoned? Find out in Inkblot #4 from Image Comics!

Previously in Inkblot: The story has meandered about, following the exploits of the Seeker’s family of legendary heroes and their interactions with the otherworldly demon that the Seeker accidentally summoned. This demon, or small black cat, seems to be able to wriggle through time and space as easily as any cat can squirm into areas where it is not supposed to go. Last time, it wriggled through to a land of oceans and floating cities where the Seeker’s brother Illivanos quarrels with his love Stormlocke. The cat rescues a peaceful sea creature, pops it through a portal, and the legend of the Loch Ness monster is born.

THE SANDS OF TIME

Inkblot #4 continues in the spirit of the book since the beginning. It opens on Earth again, this time in ancient Egypt. Xenthos and his family (the legendary family of monster destroyers) are on the march. The Seeker is along too, riding in a miniature chariot version of a library complete with writing desk. This is when she first proposes building a library for herself. Her little brother Inos does not believe her.

Xenthos’ magic staff glows and he strikes the ground before him, ordering the monster he seeks to rise. And rise it does, an enormous sphinx, from the desert sands. She immediately recognizes Xwnthos as a hunter, the hunter whose magic will dwindle without monsters to fuel it. But she also knows that there are so few monsters left, he wants to make a bargain.

An irate man with a pegleg, Khaba, grabs the bag Inos carries, slices it open, and offers the cat up to the sphinx. Yes, it is the cat we’ve been following. The cat has been sleeping on Khaba’s face and he is tired of it. The sphinx sees this offering as absurd and names her own price in a riddle. Overhearing her, the Seeker quickly puzzles it out; the sphinx wants Xenthos’ staff.

But the staff is one thing Xenthos will not part with, and their disagreement quickly devolves into a fight (while Khaba still wants to get rid of the cat). In the chaos, Khaba is beheaded and Xenthos gets really angry. He strikes down the sphinx. The cat vanishes. Khaba vanishes.

Back in the Forestlands, in the Living Castle, in the relative present, the Seeker mutters about Illivanos as she digs through her bag. Imagine her surprise as she finds a pegleg, then the corpse of Khaba still attached to it. And then the cat jumps out.

Inkblot #4 has changed settings yet again, and the art holds up here as well. We see a lot more of the Seeker and her family/people – one gets the feeling that this band of people could be all related. Their collective style is more medieval fantasy, so the don’t look like what we would expect of ancient Egyptians. Khaba is particularly interesting and entertaining. We see all of his frustration with the cat who has become fond of pestering him, possibly because he doesn’t like it. I was surprised to see him beheaded on panel, as so far this book has not been overly bloody. For someone who seemed like comic relief, this was quite the one-eighty.

I really like the sphinx in this book. Its body is definitely that of a large lion. The face is human-like while still holding onto some feline traits. It looks as though it is a creature made from stone with surface cracks running about its body. But we also see it stand up in challenge, and actively pounce on and fight against Xenthos and his people. It looks lithe and powerful and the fight, though brief, is exciting.

Inkblot #4 is its own kind of book. There is a loose connecting thread that makes this more than just a bunch of amusing cat-related stories, but that thread still runs pretty deep. The individual stories are each charming in their own ways.

Ancient Egyptians worshipped cats – but maybe not this particular one.