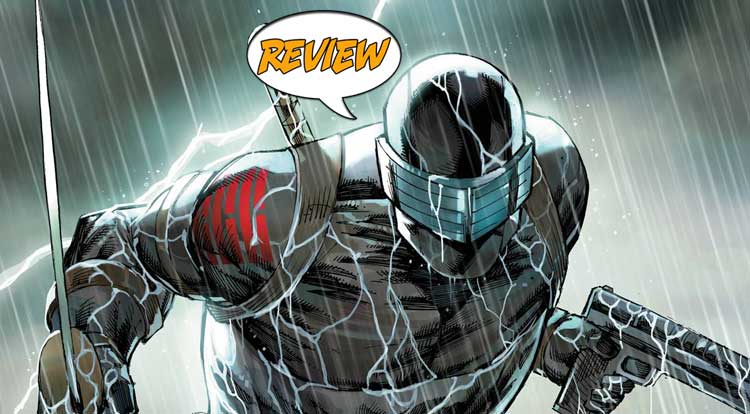 The Deadgame continues and an old friend makes a sudden return.  Your Major Spoilers review of Snake-Eyes: Deadgame #3 from IDW Publishing awaits!

Previously in Snake-Eyes: Deadgame:  Snake Eyes is caught in the crosshairs.  Will he be able to escape this lethal challenge?

Or will he, like others before him, fall to the power of…  the Deadgame?

A LOT OF POSTURING AND EXPOSITION

So, we begin with another bit of legendary back story, as The Grave Master battles against someone who is implicitly Thor, losing his fight against the prince of storms.  In the present, near the Gulf of Benzheen, Snake-Eyes is being sent into a some sort of canyon by a resurrected Grave Master and his daughter Olympia, only to find that the monster awaiting him is a giant cobra.  (That’s the first of several parts of this issue that are just TOO on-the-nose.)  Before he can be destroyed, though, Storm Shadow appears and enters the fight with him, distracting the giant serpent and allowing Snake-Eyes top attack the creature and fetch a sacred sword.  The two ninjas fight the immortal man-in-red and are nearly overpowered when a third figure flies into the scene, snarling about how these unkillable folks aren’t so tough, and while they may be bulletproof, he’s not BULLET MAN PROOF!

Visually, this issue is kind of a train wreck, with costumes changing from panel-to-panel and each fight sequences featuring bodies wildly contorting through the air with no continuity from panel-to-panel and page-to-page.  The final page reveal that the G.I. Joe adventure team (featuring the original Joe, Atomic Man and Bullet Man) have returned might have excited me if they didn’t all feature the trademark Liefeld grimace full of too many teeth.  Reference is made to Snake-Eyes “stitching together” a red costume out of the wraps of a fallen ninja, but it’s clearly the same body suit he’s always worn, without a single stitch in place.  The story is a little more successful, though it should be noted that nothing really happens other than an extended fight scene and a nonsensical flashback.  I love Snake-Eyes and the lore of G.I. Joe, but the whole Deadgame premise is still essentially unexplained and unexamined three issue in and even the return of characters I remember isn’t enough to overcome the feeling that none of this makes sense or means anything.

BOTTOM LINE: THIS IS NOT GOOD

It’s a real bummer for me, as I enjoy a lot of IDW’s G.I. Joe stuff, but Snake-Eyes: Deadgame #3 is hampered by inconsistent art, incoherent dialogue and a general lack of stakes, consequences and meaning, tallying up to a disappointed 1.5 out of 5 stars overall.  There are much better G.I. Joe books coming out every month (I’m even enjoying the rebooted series where Cobra has taken over the US), and I recommend that you check them out instead, as this one is completely off the rails.

The use of the Adventure Team heroes is something I'm interested in, but Liefeld's art and writing definitely are not, and the issue feels simultaneously bloated and slight.