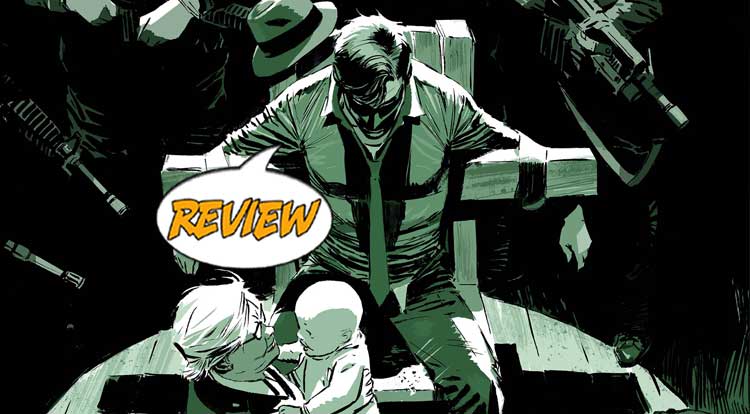 Is this the end of the Green Hornet and Kato?  I wouldn’t bet against them.  Your Major Spoilers review of Green Hornet #4 from Dynamite Entertainment awaits! This story opens in mid-fight, as Kato faces down against the mysterious Preying Mantis, whose fighting prowess might rival his own.  Fortunately, he’s got two things on his side: A lifetime of training in Jeet Kune Do and a mysterious astronaut who catches her by surprise.  They form an alliance and seek out the Green Hornet, currently in military custody.  One Colonel Briggs lets him out, and she proceeds to explain that they’re holding another astronaut, this one an alien who crashed to Earth in issue #1 (and also caused the Astronaut’s origins, as we discovered previously.)  Turns out, it’s a baby and the government intends to dissect it to see what sort of invasion it’s spearheading.  Colonel Briggs can’t understand why a “criminal overlord” cares, but Britt Reid saves the child and manages to get away, thanks to Kato, The Astronaut and a wall that wasn’t quite strong enough to withstand The Black Beauty.  Realizing that his blood feud is with an innocent baby, The Astronaut takes his leave, while The Hornet and Kato send the reporter that they also saved back to the Daily Sentinel to print the story, taking ground in the barn where we first encountered them back in issue #1…

I LOVE THE COLOR PALETTE

The first thing I noticed about this issue was the limited color palette, using black and green (the heroes’ signature colors) to deliver all the information that we need to understand the tale.  The art is equally impressive, as Marquez, Bone and Ruiz (I’m not sure who did what, and frankly, I’m not worried when it looks this good) create images that remind me of ‘Batman: The Animated Series’ combined with a traditional newspaper comic strip.  Though there are slightly cartoony exaggerations, every panel is exciting and dynamic, even when they shouldn’t be.  The shot of Black Beauty breaking through the wall is GORGEOUS and The Astronaut’s full-page flight of despair is equally impressive.  There’s not an ounce of fat on this plot, either, as it keeps in motion at all times, taking us from place to place effortlessly, maintaining its momentum and the tension of the plot at all times.  This issue ends where issue #1 of the series began, giving us the setup for a big finale next month, and I’m all for it.

Though a fan of the Green Hornet in the abstract, I haven’t been reading the book recently, and this issue proves that to have been a mistake.  Green Hornet #4 is a home run, with story and art combining into a perfect fusion, moving quickly and effectively through the story (and borrowing Superman’s origin for a nice metatextual twist) with the limited color palette emphasizing how unique the art is, shaking down to a dead solid 5 out of 5 stars overall.  I’ve already bought and read the previous issues of this volume, and will be looking out to see what happens after this miniseries ends, as I haven’t had this much fun with a Green Hornet comic since the NOW! Comics days of the 1990s.

This issue is a marvel, featuring wonderfully expressive art, an inspired green-tinted color palette and a plot that is always in motion. Truly excellent stuff.