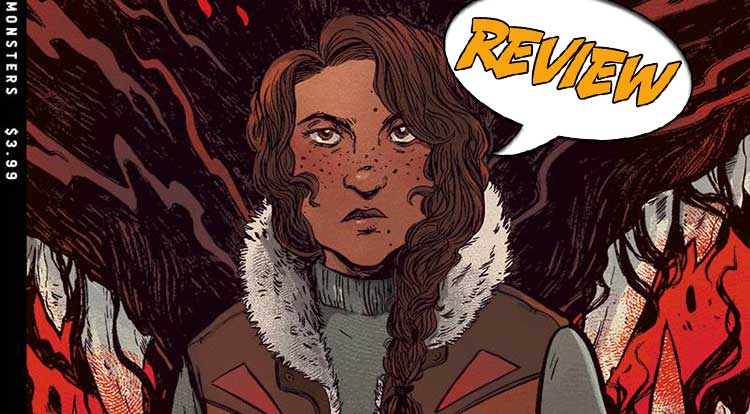 I Walk With Monsters #1 Review

In I Walk With Monsters #1 Jacey grew up on a farm where her father killed the casual workers, and sold her brother into slavery.  Now an adult, Jacey stops serial killers, with the help of David whose talents are perfectly suited to killing.  Where is Jacey’s search for her missing brother taking her?  Find out in your next mighty Major Spoilers review!

I WALK WITH MONSTERS #1

Previously in I Walk With Monsters:  Jacey had a complicated, troubling past as a child.  Raised on a farm with a domineering father, and a beloved brother, Jake, Jacey watched as her father essentially gave away her brother to someone she now calls the Important Man.  Now an adult, Jacey works to help missing children, in the company of David, a man with bloodthirsty tastes…

Paul Cornell made his name in the 1990s writing Doctor Who licensed fiction.  His books took the range in startlingly different directions, with a no holds barred style that mixed rage against Thatcher’s Britain, with some extremely interesting psychological examination of the Doctor’s character.  Latterly, Cornell has moved into comics and now we find him writing I Walk With Monsters #1.

I Walk With Monsters #1 taps into the horror trope of the lone female survivor in interesting ways.  A frequent attendee and panelist at Doctor Who conventions, about a decade ago, Cornell announced he wouldn’t sit on panels if there wasn’t a preponderance of female voices with him.  Women to that point were long marginalized within Doctor Who fandom, and while their increasing presence in fandom pre-dates Cornell’s announcement, the example he set clearly has encouraged organizers to include more women within their programs.

All this is said because I Walk With Monsters #1 is a punishing, disturbing look at the psychological damage men wreak on women.  Jacey grew up on a farm with her brother Jake.  Their father is clearly a serial killer of some sort, murdering the casual farm labor he hires.  He is a massive figure in Jacey’s life, literally (as depicted by Sally Cantirino, he’s a man mountain) and psychologically.  Jacey clearly remembers going to the State Fair, and seeing her father essentially give away her brother to a mysterious figure she now calls the Important Man.  The damage caused to her living on the farm and seeing her brother disappear feeds into her current activities.

CUT US OPEN AND WE BLEED HATE

I won’t spoil what Jacey does now, or how the man she travels with, David interacts with her.  Of more importance is how Cornell examines how damaged she is – prepared to risk her life in such a precarious existence, the way the past has a death grip on her mentally, and the things she sees David do in accomplishing their work.  Cornell’s writing is adept and assured here – Jacey is consumed by hate and a deep and abiding need to find her brother.  The way she deals with the predator men she comes across is shocking, and viscerally satisfying.  It will leave the readers conflicted though – how is what she’s doing better than what the men she is punishing are doing.  Is she as much a predator as savior?  Cornell’s sympathies are clear, but he’s subtle enough as a writer to leave room for readers to make up their own minds.

Special praise must go to Cantirino, who has created a world as ugly and dirty as the psychology being examined in I Walk With Monsters #1.  Cantirino brings out an earthiness to the setting that indicates the messy state of Jacey’s life.  There are strong images of bloody mayhem as well, and some images that depict how large the events of Jacey’s childhood loom mentally large for her today.

I Walk With Monsters #1 isn’t what you’d call entertaining.  It is, however, exceptionally well written.  Cornell eschews that blood and thunder a book like this might evoke in the hands of lesser writers.  Instead, his preference is for the low key.  Even in the midst of the mayhem she has instigated, Jacey never loses her temper, instead adopting a patient cynicism that undoes that rantings of the man she has trapped at the start of the issue.  And yet, there’s more to Jacey, a woman scarred by life, desperate to fill the hole the absence of her brother left, in a world dominated by men seeking to dominate women.

I Walk With Monsters #1

An interesting twist on the serial killer genre, with a sympathetic depiction of a woman whose life was ruined by a man, and now seeks to stop men who hunt women and children. There are glimmers of redemption in I Walk With Monsters #1, but for the most part, most of the people in it are monsters and predators, and Jacey walks a faint, glimmering line while beset on all sides (internally and externally) by a fundamental darkness that threatens to extinguish once and for all her humanity.