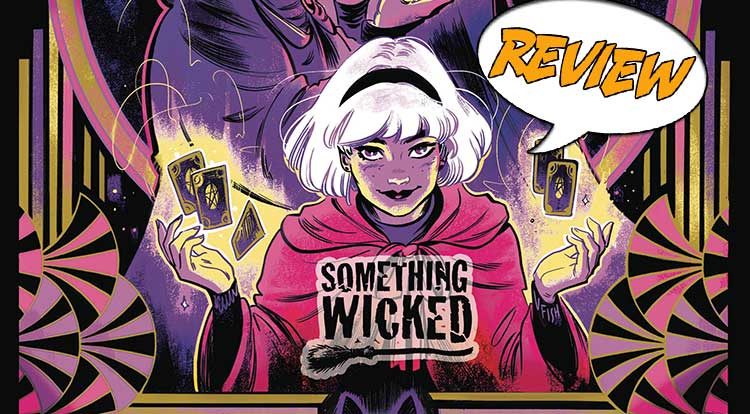 Sabrina continues to deal with the consequences of her magic and her personal life. Can she help Ren and Radka with their latest problem, and what does Ren know about the mysterious witch? Find out in Sabrina: Something Wicked #4 from Archie Comics!

SABRINA THE TEENAGE WITCH: SOMETHING WICKED #4

Previously in Sabrina the Teenage Witch: Something Wicked: Sabrina learns the hard way that magic comes with a price – in this case the destruction of a nearby forest. There’s also a killer in the area. After suspecting her aunts Hilda and Zelda, Sabrina turns invisible to spy on them. She soon realizes they are in the clear, but her magic has had some (unknown) consequence for Ren and Radka. Speaking of her friends, she’s also having trouble balancing her personal life and before she knows it, she has broken up with Harvey and committed to spending some time with Jessa.

OH, THE TRICKINESS OF LIES

Sabrina the Teenage Witch: Something Wicked #4 opens as she has just been rescued in the woods by Ren, a changed Ren with antlers and claw-like hands. They go back to her house where she hops in alone, pretending to have twisted her ankle. Hilda, Zelda, and Jessa get her settled in, and Zelda offers Jessa a ride home. Finally, Sabrina limps up to her bedroom where Ren is waiting for her.

Something has happened to him, and he feels Sabrina can help him. Now that he knows she’s a witch, he feels more certain, and feels drawn to her. They almost kiss when there is a scrabbling at her windowsill and Radka drags herself in. She also has antlers and horns. As glad as she is to find her brother, she is angry at Sabrina, blaming her for their predicament. Radka does confess to their Wendigo issue, since even though it takes both of them to be the creature, she is the only one who has any memory of it. Then Sabrina admits that her carelessness appears to have led to the antlers-and-claws problem.

Sabrina uses her magic and cures them, at least for a while. Ren admits to seeing visions of a house in the woods, where his and Radka’s mother is, and sometimes a beautiful witch, a comment which Sabrina immediately catches. As Sabrina insists they take her there, Harvey arrives, sees Ren, and leaves. Sabrina chases after him – and her story about the hurt ankle falls apart and she realizes that she can’t tell him the truth and doesn’t want to lie to him. He walks away.

Sabrina sets out with Ren and Radka and they do find the house. Radka is ready to leave. Sabrina is willing to let her go, but Ren wants to stay with her. Or at least he does right up to the point where Sabrina says she wants to go inside. Then twisted tree branches grab them all. Sabrina magics herself free, but only momentarily, and soon all three are trussed up and hanging until someone steps out to greet them.

Sabrina the Teenage Witch: Something Wicked #4 has terrific art. I love the balance between dark, horror style moments and slice of life humor. Sabrina, as it turns out, is not very deft at lying. She hops into the house dramatically. Jessa falls for it and, a true friend, is immediately concerned. The Aunts are skeptical, as is Salem, but they can all hide it. Sabrina’s expressions as she realizes where her story falls flat but is still desperate to get everyone out of the way are just priceless.

The depictions of magic are stunning. I like that the consequences Sabrina must deal with fit the extent of the spells she casts. I also like their variety. While some spells can be cast with merely a few words, some require a significant ritual. The spell to return Radka and Ren to their normal appearance is one of these, and it is just lovely with all the candles set around a magic circle as Sabrina reads an incantation from a huge book. Did I mention that the point of view is from overhead? This adds beautifully to the drama.

Sabrina the Teenage Witch: Something Wicked #4 feels both modern and magical. The mystery is tinged with both horror and lightness leaving just enough danger to make it exciting.

Sabrina the Teenage Witch: Something Wicked #4

Sabrina’s personal life may suffer, but she may be a step closer to the mystery killer!