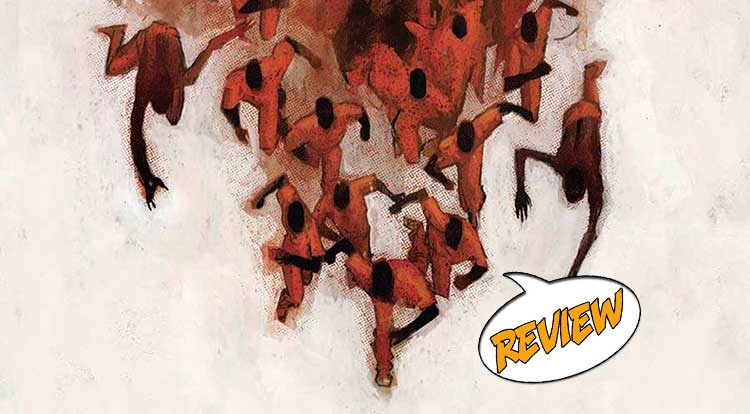 As Abigail unleashes chaos in Philadelphia, just how far back does her planning really go? Find out in Killadelphia #10 from Image Comics!

Previously in Killadelphia: The vampires are back in action in Philadelphia! Abigail’s plan seems destructive – but this is because she has decided there is no chance of living peacefully with humans. Her goal is to enslave them. With this in mind, we also learn more of Jupiter’s history and some of the key moments when he realizes what slavery means – when his parents are sold without him, and later when his wife and child are sold, again without him. Becoming a vampire offers him the opportunity for vengeance against Jefferson. Jimmy has brought his father back against his wishes for some help tracking the vampires. James does have an idea, but Abigail is on the moving, causing a distraction as Jupiter gives himself up, gets locked up in jail, and starts making more vampires!

Killadelphia #10 opens in a different time and place as we learn about another of the vampires. This isn’t a digression; each vampire we’ve met has a different story, a different situation that let them to the point where becoming a vampire seemed to be a good option at the time. This story’s crucial moment is in Deadwood, South Dakota in 1876. The undertaker in down is Fergus O’Neill, who goes by the name of Toppy due to his distinctive hat – a hat we’ve seen on one of Abigail’s band.

Meanwhile, in Philadelphia chaos has broken loose. Communications are down. No one from the outside knows just what is going on. Fighting on the front lines are the Sangsters, Jose, and Lieutenant Zimmerman. Their investigation led them into a fight for which they are not completely prepared – Jimmy has left the stakes in the car. They have to blow up the club and in the aftermath, Zimmerman is taken. Across town, Abigail speaks to Toppy of humanity, and he replies speaking of anger, madness and memories.

We return to his story. He was a plantation overseer, a position of relative privilege although at a cost. As a hunter of fugitive slaves, he is a crack shot. A promise of later freedom leads him to join the Confederate Army as a sniper, and an undertaker. His sniping makes him more enemies. He is given his freedom and the top hat that becomes his trademark. He takes his family West and ultimately settles in Deadwood.

With the death of Zimmerman, James and Jimmy’s relationship fractures further. James feels he has earned his own death and resents being pulled away from his wife. Jimmy is desperate for help and has not considered things from his father’s viewpoint.

Toppy has ten good years in Deadwood until one fateful day. First of all, a stranger comes to town and asks him to store a couple fancy coffins for a while. Then his past comes to haunt him when some men who knew him from the War make a pointed comment about his home. Sure enough, when he rides out, his house is ablaze and his wife and son are dead. When he goes back to his business and thinks about revenge, is it pure chance or was it planned that in the fancy coffins are John and Abigail Adams, and they have an offer to help with his revenge? He is turned into a vampire, and he takes his anger with him.

The art of Killadelphia #10 is gritty. It does a terrific job capturing time periods and moments in those times. Toppy’s memories are sepia-toned except for the blood and for Fergus’s thoughts. Death, often violent death, was part of life in Deadwood. Fergus’s story is told sparingly. When you think about it, it is long and complicated, but the art captures images that tell us so much about him that in a relatively short number of pages, we get it all with a great deal of nuance.

In a huge color contrast, the current story is violent and chaotic with a lot of red in the color palette. The fight in the club is amazing. There’s a full-page panel that is like a montage in and of itself. The panels lead us on flawlessly as we pan out and change viewpoints without getting lost. Red changes to fire as the club explodes, and it with this hellish background that Zimmerman is pulled back into the club. Immediately after we see a page with Abigail, clad in her red fetish-wear, sexy as hell but in this book, we can’t help but think of blood.

Killadelphia #10 is another powerful chapter in an amazing story that intertwines American history with vampires, vengeance with horror. It continues to be strongly compelling.

Amidst the chaos in Philadelphia, Abigail has the upper hand…for now.