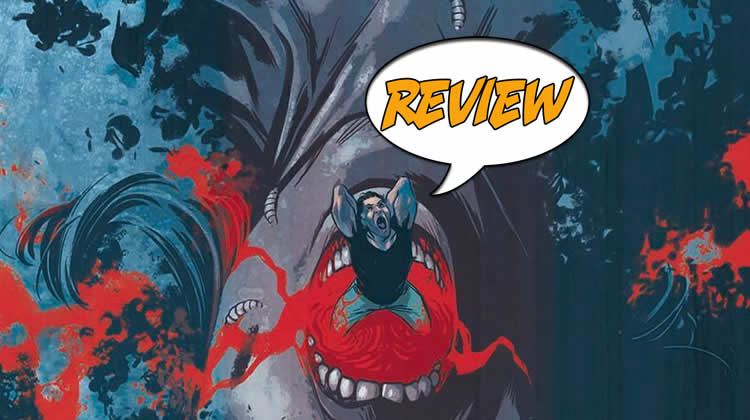 Small towns are a mystery to many, so Stillwater explores one specific town with a huge secret. What happens to an “outsider” when he figures out what’s going on? SOLICITATION: After witnessing what happens to rule breakers in Stillwater, Daniel must come to terms with what it really means to live forever. And what exactly is a deathday?

As someone who was raised in a small town, I’m always fascinated by how others look at this phenomenon. In a big city, you don’t know the person living in the apartment next to you, the people who walk by you each time you are on the street, or even your co-workers. I think this is a big reason why people who don’t come from small towns think many of them are harboring deep, dangerous secrets. Everyone KNOWS each other there! After all, we don’t understand them so there must be something untoward going on!

This comic focuses on the town of Stillwater and—what do you know—there IS something strange going on there! Imagine that! Even the name gets me. You know, “still waters run deep” and all!

This third issue basically concludes the set up begun in the first issue. We finally get to find out pretty much what’s going on. The biggest question left is: Why is this happening? We’ll likely never know that if the creators want to keep the mystique of the book going. It also may take away some of the impetus for the main character—Daniel—to figure out what he should do next.

Daniel, who is no angel himself after getting fired from his job by shoving a co-worker, is himself a “human” person in that he has good and bad aspects to his personality. I like reading about him as a character in a comic although I would probably never interact with him in real life. His connection to Stillwater is through his mother, a denizen of the town. Because of this, he’s accepted (to some degree) by the townsfolk. Of course, for now they’re keeping their eyes on him!

By now, it’s pretty clear that anyone inside of Stillwater (and a certain range of territory around it) cannot die. Injuries heal somewhat quickly, and that includes even just a head regenerating a body! Leave town, though, and you revert to natural aging and processes. You die, in other words!

Mysteries added to mysteries abound, like how he originally left Stillwater, why things are the way they are, who Daniel’s Mom really is, and what the deal is with young Galen, who we see fall from a rooftop and apparently die though he does survive.

Daniel is setting out to unmask Stillwater’s secrets from the inside, really the only way to find out the truth. His uncertain ally in all this is the town’s doctor, who doesn’t have much to do there, given the circumstances, except setting bones so they heal properly and such. Daniel calls him the most “normal” of Stillwater’s residents.

The creepiest part of this issue is when Daniel attends a party thrown by Stillwater’s “administrator” in honor of one of the town’s inhabitant’s “deathday,” when a person is likely to have died so they make it seem real through filing paperwork. They throw a party in honor of this development. I’d like to know what that person does for ID and such AFTER this date!

After that comes the sequence when the doctor is explaining to Daniel about how people in the town eat meat. UGH!

The characters are interesting, and we obviously have many more to meet in the town. We feel for Daniel in particular, being the “fish out of water” there as he tries to uncover the mystery that is Stillwater.

The dialogue is great, and the story unfolds as if this were the initial chapter in a mystery novel. To be honest, this feels like it is the initial episode in a TV whodunit show when you read them all together. Or maybe even The Prisoner, for those who remember that program.

Since there’s no superheroic action going on, the facial expressions are key to this comic. I think they are well done, letting us in on just what the characters are thinking and feeling.

This book basically works as a dramatic story, so there is very little in the way of fighting or punching or kicking. The most compelling action sequence happens in the beginning of the issue when Daniel is shot as he tries to escape. Ouch! That one hurt!

It’s not that the basic concept for this comic completely original. I’ve read many “isolated and weird” town stories over the years. What makes this one interesting to me is the people, including Daniel and the doctor. The “bad” guys also have their moments, too, and I’ll be curious to learn more about Galen and the sheriff. They keep me coming back for more.

I do enjoy a mystery, and I feel this is giving us enough information to satisfy me as we move forward. I just wonder if this was a TV pilot originally—feels that way, too!

If you are a mystery buff like me, I recommend buying and reading this book. If not, you might want to pass! To listen to the Dueling Review of Stillwater #1 here at MajorSpoilers.com, go to this link!

I’ve read many “isolated and weird” town stories over the years. What makes this one interesting to me is the people, including Daniel and the doctor.