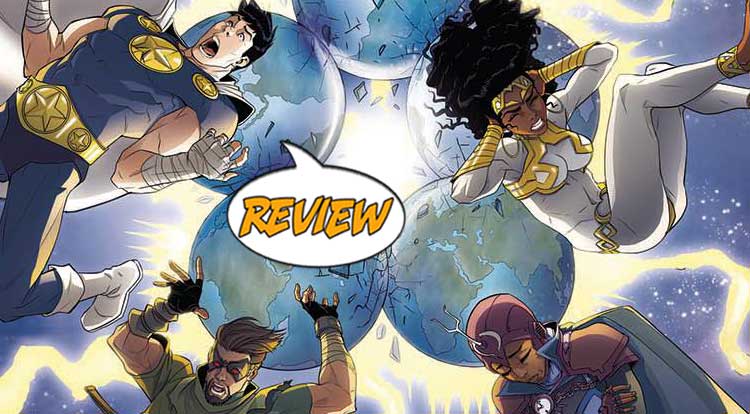 The multiverse is in danger and only five Commanders-In-Chief can save the remaining Earth… Your Major Spoilers review of Commanders In Crisis #2 from Image Comics awaits! Previously in Commanders In Crisis:  The Crisis Command, last survivors of the multiverse, are faced with an impossible task: avenging the death…of an idea!  The DOA is EMPATHY ITSELF, and while empathy withers and dies across the world, Originator uses her abilities to bring the John Doe back for 24 hours to reveal the name of his killer!

After last issue’s shocking cliffhanger, we open with a flashback on Earth-J, as the man who will become Prizefighter watches his world end, only to be drawn through a strange interdimensional void.  His entire being is rebuilt along the way, arriving on Earth-Z, where Frontier, that world’s greatest hero, has brought him, to save the remainder of the universe.  Empathy itself has somehow been transubstantiated into a human form and killed, and the Crisis Command has to figure out how… and why.  The team splits up, with Originator analyzing the body, Seer analyzing the crime scene and Sawbones and Frontier dealing with an emergency in Oregon. While dealing with a collapsing bridge, the super-duo runs afoul of overbearing National Guard members (each of whom has a strange tattoo that I know will be important, because foreshadowing is an important literary technique and your key to quality literature), while Seer gets sidetracked.  As for Originator, she finds what she hopes is the right mystical word to unravel the situation, but she fails in that endeavor…

…only to bring the murder victim back to life!

I really enjoyed issue #1 of this book, and I’m equally impressed with issue #2, with a couple of caveats for potential emptors.  If you’re one of the people braying that comics should not be political, this is not a book for you.  The members of Crisis Command are intentionally represent a wide spectrum of races and creeds, intentionally so, and the “death of empathy” at the center of the plot is a clear reference to the real world of 2020.  Honestly, I’d say that you might want to open your minds about what is and isn’t “political”, because this book is a pretty excellent comic.  Tinto’s art makes every sequence visually interesting, from a quiet conversation in a kitchen in Philadelphia to a super-powered battle to save a suspension bridge.  Moreover, everyone gets a little character development time in this second issue, giving us a deeper look into their minds and characters, and I like them all.  Add in premise that is over-the-top metatextual, and you’ve got a comic book that was tailor-made for me as a reader.

Here’s the deal: Commanders In Crisis #2 is a good comic, filled with wildly creative concepts, characters who are interesting, super-powers you’ve never seen before and really strong art, earning 4 out of 5 stars overall.  Orlando delivers on a traditional massive multiversal crossover madness plot while making it feel personal for each character, and I’ll be picking up the rest of this twelve-issue miniseries based on the strength of these first two chapters.

It's not subtle, but that doesn't mean it's not enjoyable, well-drawn and suspenseful. Add in a group of characters with some of the most unique powers ever, and you've got a winner.