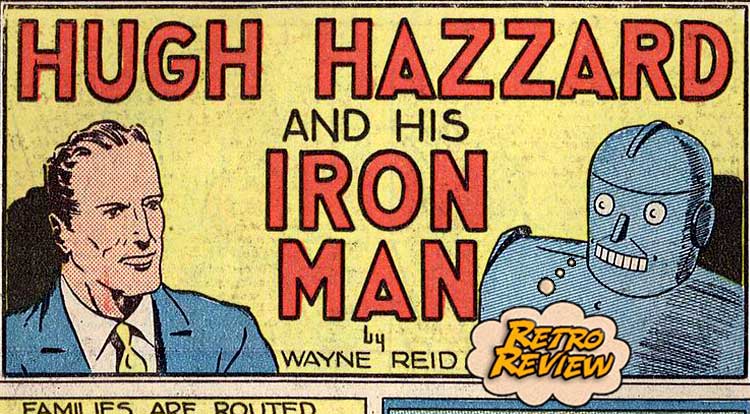 You might know Tony Stark…  but do you know the ORIGINAL Iron Man?  Your Major Spoilers (Retro) Review of Smash Comics #1 awaits! Previously in Smash Comics:  Kicking off in 1937, Quality Comics’ name was truly fitting.  Packaging material not only from an in-house staff but from the legendary Eisner/Iger Studios, among others, Quality was home to some of the finest artists of the Golden Age of comics.  Quality’s stable of characters included Plastic Man, Blackhawk and tons of lesser-known characters, but even the most astute of comic fans probably haven’t heard much about this issue’s stars.  Super-spy hero The Black Ace kicks off the issue, followed by Detective Philpot Veep, ace reporter Chic Carter (who would later become a superhero called The Sword), aviator hero Wings Wendall, bigfoot cartoon goober Archie O’Toole, pulp-style proto-superhero The Invisible Hood, Captain Cook of Scotland Yard and gadabout detective Clip Chance.

But it’s this issue’s final feature that we’re here to discuss, in which a hero arises… a hero called BOZO! The streets of our nameless city are awash with fear, as a mysterious metal monster has been stalking the people, robbing, plundering and even killing under the control of unknown forces.  The police are stymied, as the Iron Monster keeps disappearing, escaping back to the secret lair of its creator, Doctor Von Thorp.  That’s when the commissioner calls in the big guns… Crack PI Hugh Hazzard always gets his man, and he’s more than happy to try and unravel this fantastic tale.  Interestingly, this entire story is done in a 12-panel grid.  Artist George Brenner uses the small panels to great effect, though, and making it feel like much more than 7 pages worth of story.  Hugh manages to suss out the identity of the inventor, but upon arrival at his home, finds that Von Thorp is DEAD! Or, at least, that’s what he wants the police to believe.  When the body disappears, Hazzard finds himself certain that the mad scientist was neither taken captive by thugs nor killed, but rather than try and follow the creator, he finds the robot itself, robbing a jewelry store. Thanks to the Iron Monsters hollow torso, Hazzard is carried back to Von Thorp’s new hideout, where he takes the inventor into custody…  and then has an idea of his own. Now in permanent possession of the robot, whom he dubs Bozo, Hazzard’s ace investigating skills are about to get a boost.  For the next four years, he and Bozo would fight crime together, with Hugh sometimes climbing inside the Iron Man and piloting him like a suit, much as Tony Stark would a quarter-century later.  Smash Comics #1 isn’t the most memorable comic book, but it’s a well-drawn comic across the board, with a couple of stories that stand out among the fare of the era, earning 3.5 out of 5 stars overall.  The story of Bozo’s adventures as the original Iron Man is one of those fun little bits of ephemera that remind us of the bizarre joys of comic books.  Especially this early in comic book history, there are no rules, and that’s just fine with me.