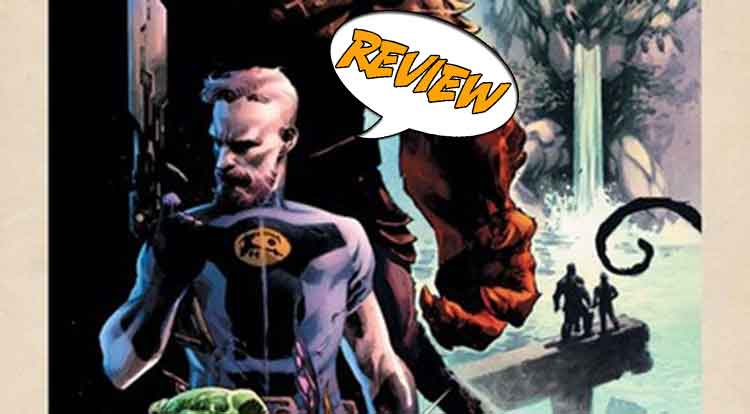 In Seven to Eternity #14, after killing Volmer the Sky King, Garils and Adam trek to the Springs of Zhal, to cure a dying Adam.  But what is the cost of the cure, and immortality, and is Adam willing to pay it?  Find out in your next mighty Major Spoilers review! Previously in Seven to Eternity:  When Adam sought to bring down the Mud King and free the realm of Zhal, little did he know that the wasting disease that was claiming him could be cured with the tyrant’s help.  Faced with an impossible choice, Adam killed the sky king Volmer before he could kill his father, the Mud King, who had become Adam’s friend, and the only man who could lead him to the cure…

Seven to Eternity #14 is a sumptuously illustrated book that has something to captivate the reader on every single page.  Jerome Opena’s vision is truly breathtaking, and his ability to realize it on the page is a true blessing to the reader.  Working with colorist Matt Hollingsworth, Opena’s art is the highlight of the issue.

The writing, by Rick Remender, while not matching the quality of the art, is solid and does throw up a few interesting moments as Adam and Garils, the Mud King, swap stories about the lands about them, and their final destination, the Springs of Zhal.  Adam has an incurable wasting disease, which Garils has told him can be cured at the Springs.   Remender’s writing is as sturdy as ever, with Adam and Garils being the core components of the story.  The lies we tell ourselves, as in Adam’s case, form the core of the story.  To gain immortality, he must truly testify why he wants immortality.  The answer he gives, in Remender’s hands, reveals a lot about someone’s capacity to deceive themselves.

Let’s get back to the art.  Opena has a lot of work to do.  Aside from the human Adam, this Land of Zhal has a huge variety of bipedal creatures he brings to life.  Tall, short, fat or thin, frog-like or even demonic, it’s a remarkable amount of work that Opena has achieved seemingly effortlessly.  Not only that, but the look of the surroundings is also expressively realized.  Zhal isn’t simply your cod-Middle Earth, full of mountains, forests and rivers.  On a broader canvas, there is huge statuary holding up buildings, massively carved figures that dot the landscape, curving roads that sweep into the air, and the overall sense that in Zhal, anything can appear around the corner.  The depth and breadth of the realization of this world is nothing short of stunning.

GIVE ME THE PRIZE

The key to Seven to Eternity #14 is the reason Adam must give for seeking immortality.  If he tells the truth, he will be granted the gift, but if he lies, it will forever be denied him.  While his erstwhile friend Garils, for whom Adam has sacrificed much, takes him to the city, we are left to ponder what sort of man Adam is.  While he has convinced himself he has been acting all along to help his family, left stranded in a dying forest, and seek to kill Garils in his father’s place, Adam has instead befriended his erstwhile target, and seemingly abandoned his original quest.  Adam comes across as the victim, but do his reasons for seeking immortality stack up?

Seven to Eternity #14 is set in a fantastical land populated with impossible creatures.  There’s an element of the fairy tale to it all, with Garils’ fable of how the Springs came to be especially powerful.  But is Adam’s reason for claiming immortality has insubstantial as a fairy tale.  Has he been lying to himself all along?  While Seven to Eternity #14 will be noted more for its art than anything else, Remender’s examination of man’s capacity for self deception is worth pondering over.

Seven to Eternity #14 depicts an alien world beautifully realised by artist Jerome Opena. The vision he has put onto the page is exceptional, a feast for the eyes that will lead the reader to go back through the issue to experience it again.  The writing is solid, with Remender’s efforts to bring some deeper meaning to Adam’s choice making for a powerful conclusion.

Art like this gives meaning to the comic’s genre. In SEVEN TO ETERNITY #14, it is truly overwhelming, which is the point, as the dying characters who fill the pages struggle to come to terms with the abyss they are about to plunge into.