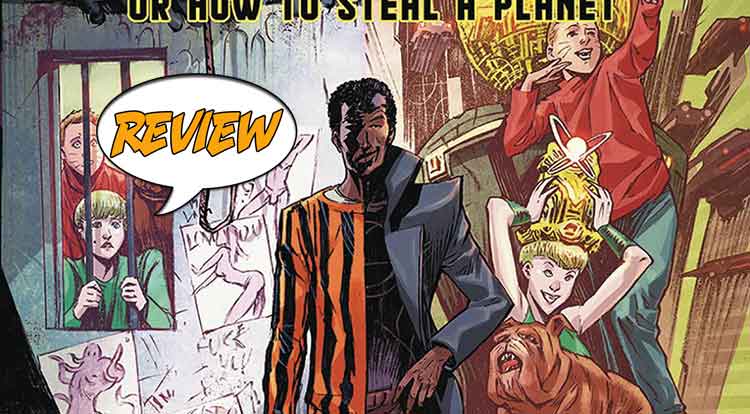 Heist, or How to Steal a Planet #8 Review

And it all comes down to this moment – can Glane Breld pull off the biggest con ever? Find out in Heist, or How to Steal a Planet #8 from Vault Comics!

HEIST, OR HOW TO STEAL A PLANET #8

Previously in Heist, or How to Steal a Planet: Glane Breld has all the paperwork he needs for his plot to take possession of the planet. Meanwhile, Eddy has gone over to Reven’s side and Celene is hanging out with the Conqueror Crows. Breld needs to get his paperwork through the city and file it at the courthouse in person. After a lengthy chase full of disguises and weaseling his way through problems galore, Glane finds himself in the midst of the Conqueror Crows!

Heist, or How to Steal a Planet #8 starts out with the Crows and keeps on accelerating through to the end. This book is a wild ride that starts out strong and just keeps getting better. The Crows, with their leader Dudge front and center, throw out some pithy gun-related comments. One of them reveals herself to be Celene and, in twist number one, the Crows cheerfully tell Breld that they’re here to escort him to the courthouse. Celene admits she doesn’t like Breld all that much, but he did bring her cheese (a few issues ago). I enjoy a heist when little gestures tilt the scales in favor of a payoff later. Breld gets his papers filed to much cheering.

Meanwhile, Samuel Reven is in his office high over the city looking down over it. He has been doing nothing as Dignity’s stock value plummets. His assistant is concerned – what if they have lost the planet? Reven is not worried. After all, Eddy has told him everything, and he has decided to wait a bit longer, until Glane really thinks he’s won. I mean, why just simply beat someone if you could also rub it in a bit, right?

A few hours later there is much celebrating and serious partying at the Bold Door when suddenly a handful of armed guards clear the way for Samuel Reven’s grand entrance. He brings in Eddy and his sister Kenni to gloat. Since Eddy gave away the plot, his people were able to prove that Breld’s papers were counterfeit. He has proved that Breld has defrauded Dignity and plans to send him back to prison for a long time. Gloat, gloat!

But wait – there’s another twist! Eddy never really had a sister. It turns out that “Kenni” is actually Gaville in disguise. She and Eddy have been in Reven’s lair for days, and the plot to steal Heist was a distraction all along. While Reven was letting his stocks tank so he could confront Breld at a more dramatic time, they engineered a purchase of Dignity stocks in Breld’s name (using Dignity funds). This was brilliantly set up; I didn’t see it coming and it was glorious!

But wait – there’s more! Brady, the kid, approaches Breld with Tilla and a couple other guys. Breld bought his brain splint from them way back in issue #1, and he signed a consent form that gives 10% of his earnings to Brady. And Brady wants Heist. There is a pregnant pause as we all hold our breaths – and Breld gives Brady a huge hug.

And if you thought that was all, there is a cool epilogue to tie things off even more neatly. Wow, is this a fun book! It’s tight, it’s funny, it’s over-the-top, and it is really smart. Sheer attitude throughout and a true pleasure to read and savor.

THE TWISTS AND TURNS OF THE KNIFE

I love the art of Heist, or How to Steal a Planet #8. We’ve seen all the important world building. This is the moment of truth, and everything focus on the characters, and by this I mean all the characters. We get to see Dudge and his gang run through the streets with gleeful abandon and random gunshots as they escort Breld to the courthouse. It’s gloriously anarchic, especially as the crowds start cheering them on. It adds to the excitement.

Reven looks absolutely smarmy. He’s not bad-looking; he’s just one of those insufferable rich guys you love to hate. He wears his confidence with the air of years of practice. When he stops the party, this confidence is compelling. Did he really figure it out? After all this work and all these issues, is Breld headed for the biggest of falls? And Breld carries out his role perfectly, so much so that when Gaville reveals herself, we almost do as much of a spit-take as Reven does.

Heist, or How to Steal a Planet #8 is a thrilling conclusion that delivers a perfect ending wrapped up and tied off with a bow. I don’t think there’s a loose end left behind. Every character gets a moment to shine. It’s a crazy, fun time throughout.