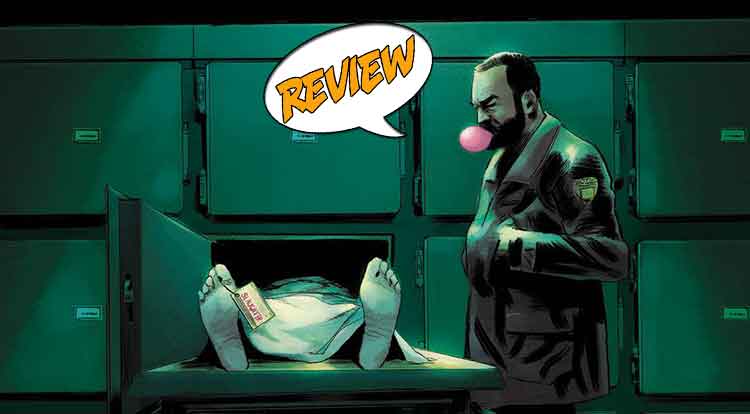 Something is Killing the Children #12 Review

Erica finds Bian talking to her and James reveals more about where the monsters come from. Intrigued? Find out more in Something is Killing the Children #12 from BOOM! Studios. SOMETHING IS KILLING THE CHILDREN #12

Previously in Something is Killing the Children: All hell has broken loose in Archer’s Peak as the (invisible) monster kills another child – and this time the event is posted on social media! Erica tells the Sheriff to keep people safe inside the school and gym, and to trust Tommy to let him know if and when it will be safe for anyone to leave. Erica’s Order, in Chicago, takes steps to quell the social media and isolate Archer’s Peak as the man called the Old Dragon sends in a team to take care of things and bring Erica back alive. Erica needs James and Bian to perform the ritual she needs to do to kill the monsters – but can she do this before her old Order arrives on the scene?

Something is Killing the Children #12 opens with James pounding on the door of a house. This is where John, the Deputy, has taken Bian. John doesn’t want to get Bian involved, but James talks him into bringing Erica in. She has been bitten and is bleeding. She can stitch it up herself if she has a place to do it. She also doesn’t have much time. The Order of St. George is coming.

John sincerely wants to help. Erica is willing to tell him some of what’s going on, as long as he realizes that a lot of it will sound like nonsense and he will have to take her at her word. It is a huge leap of faith, but James also knows something about the monsters. Erica also bitterly admits that the Order is more concerned about keeping the monsters secret than about keeping people alive.

Outside the school, Tommy looks around. The blood and bodies are still there, but he doesn’t see any monsters. At least at first. He hears and then sees one and runs back to the school. Before he goes through the door, though, he sees four white, toothy masks in the darkness. They have more trouble at hand than just the monsters.

Now this is where the story gets even more intriguing. Erica has to talk to Bian, who still holds a grudge against her for wanting to hurt the babies. Erica explains that the babies grow up fast to become big, and that’s how she got hurt. But Erica wants to know about what happened before the mother monster brought Bian to the cave. She was at a sleepover with a girl who was the sister of one of James’ friends. They told scary stories, and one of them was about the monster. And that’s when kids started to disappear. Bian started seeing the monster more and more, and then it came to take her away.

James runs out to the porch and Erica talks to him as well. He has realized that, somehow, the monster started with him, and he feels all of this is his fault. Erica admits she knew he was where it started, because he was the one left alive that night. He had just made up the story about the monster. Erica starts to explain that there is more to it than that.

But it is too late. The Order of St. George arrives.

This hint of a origin story for the monster is fascinating. It seems odd that even an organization as clever as the Order of St. George could keep monsters secret if there are a lot of them. But if their origins are more idiosyncratic, they could be far more rare.

Something is Killing the Children #12 hits on something that I think is often key to a horror story. To feel plausible with otherworldly as invisible monsters that can be seen only by children, you have to balance it with a healthy dose of the familiar and mundane. This issue encapsulates that. Erica’s fight and injury are shown through a wordless two-page spread sandwiched between scenes at the house where John is, which is incredibly quiet and suburban.

I like James a lot in this issue. This young man has gone through a lot, and his ordeal is not over yet. At the start he is in shock, desperately convincing John that Erica needs help. As she explains what is going on, he is still lost, not understanding why here and why now. When Bian tells her story, he realizes instantly that her friend was his friend’s little sister, and as she talks about the scary monsters, we see him realize that somehow his own story twisted out of hand and affected her. This is an incredible amount of trauma, and by the end he is almost broken by it.

BOTTOM LINE: WHERE DO MONSTERS COME FROM?

While Something is Killing the Children #12 explores the idea of childhood monsters as real beings, I think there is still something allegorical about them, as though some of the monsters children fear are actually real things, but beyond comprehension so that understanding them as monsters makes more sense. Couple that with the portrayal of the Order of St. George as being monstrously dispassionate, and this is a read with a compelling amount of nuance.

Something is Killing the Children #12

Time is running out as Erica races to deal with the monsters before the Order of St. George arrives!