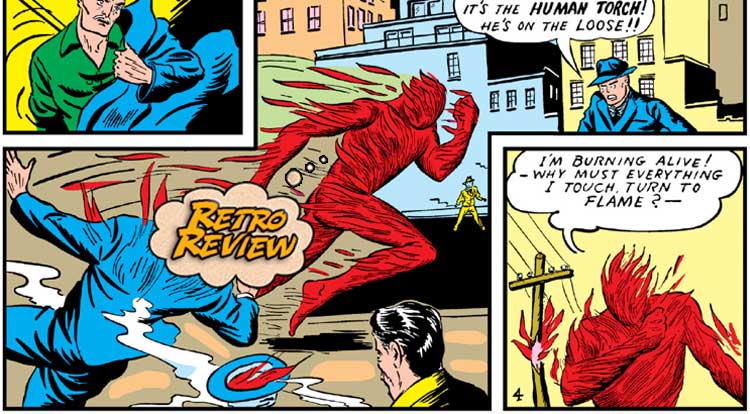 It’s the issue that named a company that changed the face of comics forever!  Your Major Spoilers (Retro) Review of Marvel Comics #1 awaits! Previously in Marvel Comics:  Having started his own pulp magazine business in 1933, Martin Goodman was a man who knew which way the wind blew.  With the popularity of superhero comics after the debut of Superman, Goodman launched Timely Publications in 1939, serving as editor, managing editor and business manager (and coincidentally hiring his wife’s 16-year-old cousin Stan as office assistant.)  Timely would change it’s operating identity a number of times, publishing as Atlas Comics for time before eventually officially adopting the Marvel Comics name.  Still, with the company now nearly eight decades old, it’s amazing to see how much of this comic is still part of the ongoing Marvel Universe.

It all starts with a man called Phineas… Professor Phineas T. Horton has done the unthinkable: He has created a perfect artificial humanoid, a robot that can pass for human in all the ways that matter.  Well, almost all…  He has this tendency to burst into flame when exposed to any oxygen.  Dubbed The Human Torch, the android ends up being designated a failure and buried (literally), only to burst free an unspecified amount of time later.  Rushing through the streets, he ends up in the clutches of a mobster named Sardo, who wants to use his powers for personal gain.  Whether he’s just angry at being captured or has a keen sense of innate justice isn’t clear yet, but what is clear is that the Torch is going to take Sardo down. By the end of the story, Sardo is dead by his own hand, The Human Torch has learned to turn his flame on and off at will and has set off for a life of adventure.  Burgos’ art is primitive, even by the standards of the age, but his Torch feels like a creature of living fire rather than the “man colored red” that we’d get from later artists, and his cars and backgrounds are detailed and fun.  Next up in the Marvel Universe is another character whose name would be used for a later superhero to greater acclaim: The Angel! Though never actually named in this issue, the Golden Age Angel has been the subject of MANY retcons, including the one that decided that twins Thomas and Simon Halloway shared the role, a necessary retcon due to editorial oversight.  There’s also the story that claims that the mask that he wore in later adventures was actually passed down from The Two-Gun Kid upon his death, along with the kid’s six-shooters.  This issue’s third feature will seem familiar to anyone who remembers our Retro Review of Motion Picture Funnies #1, the first appearance of Namor The Sub-Mariner.  That tale is reprinted here, accompanied by what would have been the story from the never-published #2, giving Namor his official debut. Bill Everett’s work in the second half of the story is more polished than the first (and, indeed, more polished than the rest of this issue), but there are still some really disturbing giant-eyed characters on display.  That said, I really enjoy the art, especially Everett’s take on the lovely Dorma  The story also makes it clear that Namor is an anti-hero, ready to wage war on the surface-dwellers, a trait that is once again at the forefront of his character as of this writing.  The next tale in the issue is the origin of a hero who had been forgotten for many years, only to be revived in the last year. After falling prey to a corrupt sheriff, Jim Gardner fakes his own death, making a run for it.  In the wilds, he finds and adopts a wild steed called Lightning, put on a hood and set out to bring the owlhoots to justice.  The Masked Raider is, in this issue, very much an ersatz Lone Ranger, but he has returned to the Marvel Universe recently and it is revealed that his mask is The Eternity Mask, which has been passed from hero to hero for centuries.  There’s a jungle story and a tale of Ka-Zar (but not THAT Ka-Zar) to wrap things up, making Marvel Comics #1 a jam-packed Golden Age anthology in the classic mold, with art that changes from story to story but never falls below “pretty okay” and stories that still have relevance to modern Marvel, earning 4 out of 5 stars overall.  If you had set out to create stories that would last nearly a century, they’d probably look like these: Engaging, full of promise and potential, with tons of bits and pieces to explore.

That “flaming elf” cover still gives me nightmares, though.

It's not perfect, and the stories don't really seem to belong in the same issue, but it's the foundation of a universe, and it's impressive to see how much of this has aged gracefully.